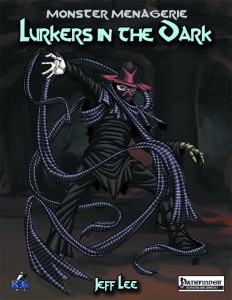 This installment of the Monster Menagerie-series clocks in at 26 pages, 1 page front cover, 1 page editorial/Toc, 1 page SRD, 1 page back cover, leaving us with 22 pages of content, so let’s take a look!

Dark Creepers and Stalkers have always been favorites of mine – mysterious, familiar…and yet alien enough to make them creepy in an uncanny valley-esque way. This installment of the Monster Menagerie-series than goes on to expand the variants of these creatures – but, more so than usual, this book could be considered also a kind of ecology – take the sample suggestions for origins of these creatures and customize the dread truth behind the race to suit your own campaign’s needs – nice!

What’s even nice, though, would be the fact that the new variants herein go above and beyond in being complex and unique – the death throes signature ability is maintained, while the subtypes get new tricks: The CR 3 dweomerthief, for example, can absorb magic and even steal the magic of items! (With nice differentiation between permanent/non-permanent items…)

The Dark Piper, also at CR 3, can not only act as a kind of amplifier for a bard – the creatures can also go full-blown Hamelin on the unsuspecting populace, making them resonate with the tropes of the classic narrative. Dark Reekers, also at this CR, would be slightly less awesome, being essentially the disgusting plague-carrier – solid, but short of the previous critters. In times of great duress, the creatures may bind an owb to a dark stalker, creating a dark regent – a powerful adversary and champion of his diverse and deadly people – and yes, these regents, at CR 8/MR 2 are mythic adversaries with unique tricks. The CR 4 Dark Tatterdemalion sported on the cover, can be considered a cool blend of the dark stalker and the tatterdemalion creature of 3.X days and, with writhing armors of strangling rags, makes for a great spellcaster-killer. Finally, the CR 1/2 darkhounds are solid, canid creatures – not more, but also nothing less.

Going beyond the usual, though, we get new items – from bottled reek to a new poison to an elixir that provides temporary adaptation to the light and to a magical net, the items are solid and supplement well their concepts. The pdf also sports a new trap, the CR 4 whiplash-snare.

The pdf also offers racial rules for dark folk characters, granting them a full racial write-up. While representing the race as intended, personally, I would only recommend the option for games that do not mind lopsided characters geared strongly towards certain professions: At Dex+4, sneak attack +1d6, poison use and SPs, etc., they are stronger geared towards certain classes and builds than the core-races and the alternate racial traits allow for even further customization. The write-up does sport favored class options for 5 core classes…and counts death throes as a racial weakness…and while I consider the race a bit too lopsided, I do absolutely concur with this assessment – in spite of scaling damage, body destruction remains a significant cost-factor at higher levels. While not suitable for the classic low-fantasy round, in case you do not mind their lopsided focus, you won’t break most games with this race. The pdf also sports two racial archetypes – the piper bard, which represents the Dark piper-tradition, and the tatterdemalion (usable for Barb, Fighter, Rogue and Ranger), gaining full use of the unique rag-based combat style of these dark folk – including, later, climb speed via tentacly rags. On a nitpicky side – I don’t get why this archetype’s abilities are listed in reverse, with the highest level one first. This does not impede the archetype, mind you, but it is an odd glitch.

The pdf also sports 4 solid racial feats – 2 for better spell absorption, one that allows grapplers to prevent grappled foes from speaking and a scaling ability to curse foes. Oh, and then the pdf also sports a fully-mapped (yes, with a player-friendly map) dark folk enclave -I just wished it also had a settlement statblock.

Editing and formatting are good – while not perfect, the pdf presents its content in an understandable and concise manner. Layout adheres to the ancient-tome-style two-column full-color standard Rogue Genius Games has adapted and the book comes fully bookmarked. Jacob Blackmon delivers nice color artworks for the new foes herein. Cartography of the enclave is solid.

Author Jeff Lee is a trooper and something of a wildcard – he’s written a diverse array of supplements on all kinds of topics and this, once again, shows that he’s not only prolific, he’s also capable. This ecology sports numerous inspiriting pieces of content – the supplement sports more than one cool, unique ability and most of the builds provided resonate with me. They also fit organically with the dark folk lore and style established so far, rendering the creatures pretty much seamless fits.

In fact, this whole pdf’s range can be considered to lie in the upper echelons – while I consider e.g. darkhounds to be bland filler (oh, yet another dark dog-creature…) and while I prefer my races to be more rounded, as a reviewer, I can’t really complain about the latter too loudly. The lopsided racial set-up is not something I’d ever consider good racial design, but the balancing of the race…not that I can complement! Additionally, the lopsided stat/ability-dispersal isn’t really the author’s fault – it’s the way the race is depicted…so, arguably, he’s done a great job here.

The supplemental material is nice as well and, particularly in the hands of GMs who want to use the racial rules to supplement dark folk parties and the like, this pdf pretty much can be considered a great, fun buy. Lacking any grievous complaints and enjoying quite a bit of this book, I will settle on a final verdict of 4.5 stars, rounded up to 5 for the purpose of this platform.

You can get this nice collection of critters here on OBS and here on d20pfsrd.com’s shop!
Endzeitgeist out.