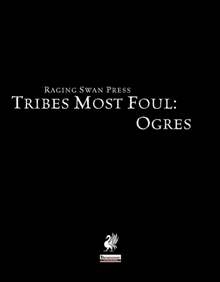 This installment of the Tribes Most Foul-series is 11 pages long, 1 page front cover, 1 page editorial/ToC, 1 page advertisement, 1 page SRD and 1 page back cover, leaving us with 6 pages of content, so let’s take a look at this offering!

As always with the Tribes Most Foul-series, we get 3 tribes herein, all of which come with a tribal roster, lore, some fluff-only NPCs, at least one statblock for a notable personality of a tribe and a unique crest, depicted in beautiful b/w-artwork.

Now let’s get one thing out of the way – Paizo’s ogres have made one of the most-loathed monsters (If I had a dime for every 1st level module that has an ogre as the final boss…) into a cool, disturbing race I love using to disgust my players. Now let’s see what spin David Posener can give to these, shall we?

The first tribe herein would be the Masters of the Cauldron – a trio of ogres known as the Ladle King, Our Mother of Belches and the Great Gourmand (who comes in all CR 13 ogre witch-glory). These ogres are not only gourmands and brilliant chefs for evil creatures with a taste for the extreme, they also are accomplished raiders of the pantries of castles all around – weird, and yet incredibly cool idea-wise: Gluttony taken to an extreme, they and their winter wolves and kidnappers definitely make for deadly, unusual combatants your PCs are sure to remember.

The Cauterized Host could be a mercenary company, were it not comprised of horribly scarred ogres addicted to an insidious drug that is sprinkled into the wounds of recruits as they lose fingers, have their bones broken and otherwise suffer in the dread initiation ceremony of the band. The drug, Zerk, is fully depicted with all its consequences, while behind a wall of blazing, smoking steel the ogres waltz through the ranks of their foes, disturbingly disciplined and effective on the battlefield – in spite (or thanks to) their addiction and the need to fuel it. Volan, a Fighter (Phalanx Soldier) 5/Barbarian (Drunken Brute, Invulnerable Rager) 3 definitely makes for the most complex build in the series so far as well as one frighteningly efficient commander. Do not get on the side of the lucerne hammers and tower shields of these deadly brutes! If I may: For a web-enhancement or in a compilation, I would LOVE to see this one get an army-statblock: I think having these beasts ravage Kingmaker-campaigns and similar kingdom-building campaigns would be awesome!

The final tribe herein would be the Mottled Lurkers: In the canopy of mighty redwoods and blue gums, these hunters are true tribal primitives, perching on their moss-covered branches and solving their conflicts via ogre moots and wrestling matches. A CR 13 advanced true primitive barbarian 10 is the sample character of the tree-worshipping ogres that hear the murderous whispers of the bloodthirsty tree spirits – madness or truth, these ogres make for deadly stalkers of the ancient forests.

Editing and formatting are top-notch, I didn’t notice any glitches. Layout adheres to RSP’s 2-column b/w-standard, with awesome crests for each tribe and the pdf comes fully bookmarked and in two versions, with one intended for being printed and one for screen-use.

David Posener has had a hard task to follow up after the superb installment on trolls and, showing that there’s a reason he tends to rank as high as he does, he actually manages to pull off not only an awesome array of tribes that lives up to the insane level of the last installment, he has also crafted one of the coolest tribes to ever come out of Raging Swan’s excellent series while providing some rather complex builds to boot – there is nothing to complain here: Variety, ideas, quality and sheer imaginative potential – all up to the highest standards and well worth 5 stars + seal of approval.

You can get these cool ogre-tribes here on OBS and here on d20pfsrd.com’s shop!