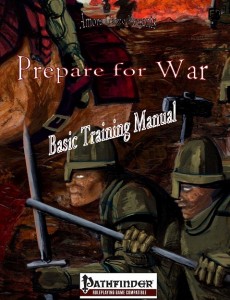 This Player’s Guide for Amora Game’s new AP is 29 pages long, 1 page front cover, 1 page editorial, 1 page ToC,1 page SRD, leaving us with 25 pages of content, so let’s take a look, shall we?

Military-life is not for the faint of heart or easy, and the same holds true for the city-state of Thaddeus, where, in the Compound 13, the PCs will undergo their training for war against the city-state’s adversaries. Hence, as you can imagine, the player characters don’t start as full-blown adventurers, but rather 0-level characters. Where via SGG (or now, RGG’s) Apprentice-level character-rules (don’t fear – all required is in here) and char generation, the PCs are made. And we’re in for at least my preferred style, with only 15-point buy (or the regular conservative rolling) making the PCs not super-heroes, but rather diligent soldiers. We also are introduced for the roles of the respective non-humans in the predominantly human Thaddean military. As the new race here, we have the ferals, essentially urbanized orcs that get +2 Str and Wis, -2 Cha, 2 primary natural claw attacks at 1d4, low-light vision,  +10 ft movement when running, charging or withdrawing, always treat Perception and Stealth as class-skills and get +2 to melee atk and AC when below half HP and without conscious ally within 30 ft. Compared to the other standard races perhaps a bit strong, but still within acceptable parameters.

Now background as per Ultimate Campaign, starting level traits, alignment etc. is covered in here as well, lending you a hand for proper character-generation. We also are introduced to the social hierarchy of the Thaddean Empire, which imho lends a level of realism to the set-up unfortunately all-too-often ignored in most settings, so kudos for that! Simple and easy to grasp though it is, its presence lends a distinct flair to the chapter!

The next section covers more than basic training, i.e. the graduation from 0-level to 1st level characters, which includes extensive breakdowns of the respective character-classes and the units they are considered as – from bards and alchemists and druids to infantry and the support-units – each class gets recommendations that help fit it within the context of the campaign and teh Thaddean Empire – and does a better job at depicting this than quite a few player’s guides I’ve read. Furthermore, we are introduced to the Thaddean Empire’s patron god Damocles. Here we also are introduced to a cool variant rule: Per default, Gods don’t heal non-believers; Damocles heals e.g. only his believers and citizens of his city-state. Non-believers can be healed, but at reduced efficiency and with the chaplain (the name for clerics of Damocles) being temporarily sickened. At least for me…Two thumbs up! The clause of alternately belonging to a city-state being enough makes infiltration, not using healing as detect-spells etc. possible, so yeah: Neat one! It should be noted that gunslingers, monks and ninjas are not covered, though – they don’t fit within the context of the campaign and while seeing them would have been nice, I’d rather have a believable, concise fluff than a half-baked hodge-podge, so again, kudos for having the guts to exclude them.

We also are introduced to quite a slew of new traits to choose from: A total of 30 new traits, to be precise. Also interesting here – they actually have a cool fluff and offer some rather interesting bonuses: Adjusting the Draw of your bow for 1 hour nets you a +1 damage-bonus to your shots, but also risks breaking the bow on a natural 1 or 2. The equivalent of the soldier fine-tuning the signature gun – rather awesome! Firing crossbows with one hand, increased pain-tolerance due to having met the military’s bone-breakers, being known for arcane friendly fire (which makes saving for your allies easier!) etc. –  these traits are actually all rather awesome and one of them is even a teamwork-trait, following Amora’s rather cool installment in the Supporting Roles-series, which btw. makes for a superb supplemental pdf for an unbeatable price.

Next up are a total of 10 new feats: From Coordinated Volleys to charging through allies, being better at sabotage, combining dirty tricks and rage, improved resiliency in groups to avoid damage from forced marches and one that allows you and an ally to stack morale bonuses and extend them to allies, but at the cost of actions every round – these feats, overall, are well-crafted and flavorful.

Now, of course we also get new archetypes, first of which would be the Armiger – no, not the RGG base-class, here, it’s a magus archetype that gets a reduced arcane pool, but may impart special arcane marks on weapons for bonuses, learn to craft magic arms and armor rather soon, at 5th level. The signature ability, though, would be arcane heraldry, which allows the armiger to create a seal on his tabard, armor etc. – when using his/her arcane pool, they may via this seal improve temporarily all weapons imbued with their marks, later learning to even add magical qualities. I can see playing this one being fun – nice, if unfortunately-named archetype.

The Battlefield Sapper Ranger chooses affiliations and organizations/nations as favored adversaries instead of creature types, get trapfinding and additional ranger traps. Even cooler, they can lay down bombs, Bridgeburner-style: Including countdown, increasing damage and rules to disarm them. Oh, and they later learn to combine these with ranger traps! AWESOME. Seriously, I really, really like this one!

Battle Sorcerors draw strength literally from their highest level arcane spell, boosting their strength and they may also erect spontaneous spell barriers to avoid being reduced below 0 hp, using his still remaining spells as a kind of hitpoint substitute; Nice, especially since the Battle Sorceror gets some solid weapon proficiencies! Later, the barrier can be used without even the immediate action it required in the beginning. Again, a cool archetype! The Cavalryman Cavalier is essentially a cavalier that is theme-wise more in line with the mounted soldier than the questing knight, with a variety of subtle modifications that make sense and should be considered balanced.

Decrier Inquisitors are masters of propaganda and censure, essentially the ideological think-tanks, whose words may stop the adversaries dead silent in their tracks or censure foes with negative effects depending on the alignments of the affected. The words of censure may later be imparted via attacks as well – again, a nice archetype. Field Medics are alchemists that get weaker bombs, but access to cognatogen as well as improved healing discoveries and fast healing-imparting smoke bombs. Nice! The Commander-class from Amora Game’s Supporting Roles-series also gets a new archetype with the Iron Fist, especially fearsome and harsh commanders. Nothing to complain here either. Peacebane Oracles are masters of antagonizing adversaries and have an aura of strife. Raider rogues are mounted rogues that are particularly adept at striking from horseback – essentially mounted skirmishers. Again, rather cool. The Siegemaster-archetype from Abandoned Art’s Amazing Races: Humans! has been acknowledged and adapted to this book as well. Bards may opt for the War Chanter archetype, who gets less skills per level, but 3 special bardic performances that allow them to negate fatigue, temporarily grant endurance and as a capstone world wave to sweep away enemies. Add to that sonic-damage causing war chants, calling lightning and grant temporary hit points to allies that respond to his call and we have one damn awesome archetype. Finally, War Wizards may reduce arcane spell failure chance, get Tactician and bonus feats, but pays for this with no less than four opposition schools.

Editing and formatting are top-notch, I didn’t notice any significant glitches that would have impeded my understanding of the content’s intent. Layout adheres to an easy-to-read two-column full-color standard with golden borders at the top and bottom. The pdf comes fully bookmarked for your convenience and the interior artwork in b/w is fitting.

Amora Game supplements have been work for me so far and I’ve bashed a couple of them to smithereens. Hence, to be honest, I wasn’t particularly excited to read and review this.

Holy Moly was I wrong.

From actually fun to read prose to complex mechanics that are handled well, this supplement had me reread it multiple times, my heart swelling a bit every time – Greg LaRose, Daron Woodson (mastermind of Abandoned Arts), Wayne Canepa and Wojciech Gruchala have crafted a supplement that draws you into the culture of the Thaddean Empire, that breathes flair, offers solid crunch and feel surprisingly unified in voice and style. Oh, and the crunch here is excellent for the target goal of providing a good crunch-backdrop for their War-AP. Almost ex nihilo, the crunch herein is actually so cool and compelling that I’m rather surprised how well all the archetypes came out – there are several herein that just had me smile my predatory “Hell yeah”-grin; With these, your group actually could go all-out Bridgeburners (early books, before the demigod-aspects came in); Better yet, Amora Game shows awareness for other supplements, adding value to them as well, though not necessarily requiring them.

Seriously, there are more great archetypes herein than in MANY of the countless supplements I’ve reviewed and the fluff, traits etc. -everything goes seamlessly together, quoting all our favorite fantasy war tropes. This player’s guide is superior to most I’ve read and is well worth the fair asking price – I salute the designers and team from Amora Game: 5 stars + seal of approval, Endzeitgeist reporting ready for the AP; If it can stand up to this guide, then I’m in for a blast.

You can get this fine collection of crunch here on OBS and here on d20pfsrd.com’s shop.

Just interested in the fluff? Here’s the free, less crunchy version on OBS!

Oh, and one more thing: What do the talented designers Alexander Augunas, Bradley Crouch, Scott Gladstein, Mike Myler, Eric Morton, Will McCardell, Daron Woodson and the Amora Game-team have in common? Well, they are all working together on a book of uncommon, cool, novel classes. The project has already been funded and currently, the kickstarter is aiming for stretch-goals. I did actually pledge on this KS, so take a look and plesge if you like what you’re seeing: Here’s the link to Liber Influxus Communis, the Book of Collective Influence.