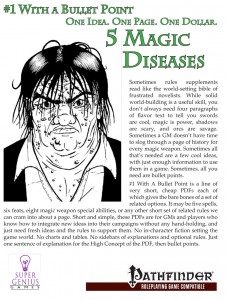 Soooo. magical diseases! YEAH! I’m a sucker for diseases, poisons, hazards, traps, curses and haunts as my poor players can attest, so let’s dive in!

-Ashenblood: Contracted by magical fire, this disease damages your con-score, but for each point, you actually get fire resistance – to the point where you can temporarily gain the fire subtype! The downside is that upon death, you are incinerated and replaced by a fire elemental. But your players don’t know that…hell, they might even keep diseased agents lying around when seeking to do battle against flame-using foes…

-Barrow Plague: This is also a transforming plague and will henceforth be added to the arsenal of each and every necromancer, lich and other undead mastermind I can find. Why? It not only damage con, it also imposes an additional penalty equal to the total of con-damage received to saves against necromancy, negative energy and level drain – and seeing how several of these are based on fort, that just adds insult to injury. Nice! Speaking of which: OF COURSE, you turn into an undead upon succumbing to this plague. What did you think?

-Fury Fever: This one deals int-damage and has an incubation of mere MINUTES. Worse, upon receiving a mere 4 points of int-damage, the target enters a mindless, barbarian-like frenzy, attacking everything larger than tiny and not infected. Yes, ladies and gentlemen, we have an appropriate representation of a rage-plague. Excellent!

-Green Guts Also highly virulent and with only an onset of mere minutes, this one nauseates the subject with a 10%-chance every minute, for up to 1d10 rounds. Now here’s the cincher: Every time a victim is nauseated, it starts vomiting up green slime. Yes! Delicious, deadly, green slime. Oh, and the target is NOT immune against the vomited slime’s effects. Hope your character has practiced projectile vomiting during his/her apprenticeship-days… Oh, and because its fun, having this for too long turns you into a gelatinous cube.

-Spellblains could be transmitetd optionally via the contact of diseased magical energies and is a bane for all casters, increasing the level of their spells for preparing or casting (for spontaneous casters) them, essentially crippling tehir spellcasting prowess – oh, and it gets worse, sicne the penalties are cumulative.

Editing and formatting are very good – apart from some minor improper capital letters, all is well. Layout adheres to SGG’s old 3-column portrait-standard, which is somewhat cluttered and since then thankfully no more around in RGG’s supplements. The pdf has no bookmarks and needs none at this length.

Owen K.C. Stephens delivers – 5 diseases, all killer, no filler – cool effects, iconic imagery, solid crunch – this is easily one of my favorite Bullet Points of all the time and 5 star + seal of approval material. And it lacks one important piece of information for every disease: Namely, how many consecutive saves are required to shake them off. Yes. None of the diseases come with the information on the cure-saves. That is a major blunder and the only reason I can’t rate this otherwise superb supplement as 5 stars +seal of approval and instead have to penalize it down to 4. Still: A definite recommendation, folks – take a look: The fun concepts will prove to be infectious!

You can get this nice little pdf here on OBS and here on d20pfsrd.com’s shop!