Road to War: The Equinox Crown 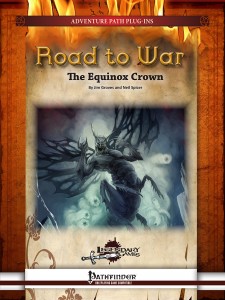 This module is 26 pages long, 1 page front cover, 1 page editorial, 1 page ToC, 1 page introduction (in which a rare Legendary Games typo can be found – a missing “Y” in “you” that has been eaten by the layout), 1 page back cover, 1 page SRD, leaving us with 20 pages of adventure, so let’s take a look!

All right, still here? Level-wise and concept-wise, this module is somewhat different from usual plug-in adventures in that is rather modular: Essentially, this module level-wise is intended to span levels 6 to 7 and are intended to make the path to Drezen more varied, providing XP and more things to do for the PCs. While they may have an army of crusaders, each encounter herein actually covers whether/how the presence of their army interacts with the encounter.

The 7 encounters herein are woven together via a subplot centering on the eponymous Equinox Crown and features a short summary of time traveled since the PCs have left as well as the number of miles they have since then covered – nice to keep track of distance etc. So what can the PCs do? Well, the trail of the Equinox Crown begins when the PCs have to essentially convince a small village to evacuate. In the night after that,. a traitor contacts the demonic forces, which results in the PCs having to fend off a couple of Hala demons and…getting the Equinox Crown. As l00t. Yeah. Somewhat anticlimactic.

When the PCs then encounter deserters, things get weird fast – during interrogation, the deserters vomit forth swarms of locusts unwittingly implanted in them and dealing with the swarms via area effects may severely damage the PC’s army. On the plus-side, this event may see the PC in question automatically bonding with the crown. That being said, this also features a massive moral dilemma I’m not sure the module handles well – what to do with the deserters? Execution may seem harsh, but letting them off the hook should have a catastrophic impact on troop-morale unless sold right – and this whole dilemma is completely glanced over and ignored – why not modify their army’s prowess to reflect their decisions? A lost chance there.

We also get a bit of mass combat (and intrigue) when one of the Condemned (pardoned criminals) pleads the PCs to save his men and finding out about a noble who has essentially sacrificed the unpopular company -defeating an army of shir-demons can integrate the remnants of the Condemned into the PC’s fold.  Pity that said noble is already dead, though – here there would have been quite some potential for a hard choice and benefits/penalties depending on your PC’s inclinations – again, lost potential.

Next up would be a fight for the PCs to handle alone (after losing scouts), against a Frost Drake (Who has a miraculously large font-size in the offense-section of his statblock) in a battle with different heights (awesome) – after that, we have the PCs explore the home of an ettin guerilla fighter and his bear companion Ripclaw.

The final encounter takes place within “The Demon’s Heresy” and has the PCs convince an earth-elemental guardian to cease attacks and then take out a mythic locust demon, including a mini-ritual, which is nice, but could have used some more detail. The pdf also contains a full-blown bestiary entry for the earthen guardians, the Durdalis and a very detailed entry on the equinox crown as well as suggested means of increasing power.

Finally, we get no less than three awesome, grid-studded full color player-friendly versions of the maps of the encounters herein, adding to the module’s value by providing top-notch cartography.

Editing and formatting are very good, though slightly below Legendary Games’ otherwise almost flawless track record. Layout adheres to a 2-column full-color standard with a flame-like orange top border for a distinct look. The artworks (2 full-page beauties that could be cover-images and 2 no less beautiful smaller pieces) are simply gorgeous and on Paizo-level. The full-color cartography also is up to a very high quality standard and the presence of player-friendly maps that can be used time and again is a huge plus for the value of this module.

So, Jim Groves and Neil Spicer deliver us the Road to War here to make the journey more interesting – Legendary Games has already shown that Jim Groves can do journey-adventures well with Road to Destiny and thus I was looking forward quite a bit to this one. Unfortunately, I have to admit to being rather disappointed – it’s not the fact that this is not a module, but instead more of a chain of loosely linked encounters, mind you – the encounters per se are well-crafted, utilize terrain, come with LG’s trademark superior production values. That’s not the problem.

Unlike all other LG-plug-in modules I’ve reviewed so far, this one feels a bit redundant in it choice of adversaries. While I’m a fan of themed modules/APs where your primary opposition has a theme, certain tricks the PCs may adapt to etc., the foes herein feel a bit like random encounters, also thanks to the overarcing storyline around the Equinox Crown being simply, I’m loathe to say it, boring. The item per se is nice and has some distinct, cool abilities, but story-wise, there simply is nothing going on here – whether regarding the legendary item’s background or the link between encounters, this whole module lacks a compelling frame narrative. And consequence. The PCs don’t have to make any hard choices herein, even though several of the encounters practically hand the DM the necessary respective dilemma on a silver platter. Choice is what makes linear journeys matter – why not choose between arrogant nobles and redeemed criminals? Why not modify the army’s stats according to the decisions made? Certainly not due to a lack of capability, seeing how excellent Legendary Games’ “Ultimate Battle” turned out to be.

At least for me, this linearity, the lack of consequence and the rather flimsy story of the crown and the adversaries herein drag this module down from the position its otherwise superb production values would guarantee. This becomes especially evident when seen in direct comparison with the SUPERB plug-in modules LG has crafted for Jade Regent, all of which mop the floor with this one, offering a deeper story and more varied experience for the AP and even when played as standalone offerings. Even as a collection of encounters, as which I’ll judge these, the lack of choice means that PCs will not consider this a respite from a railroady journey, but rather a prolonging. Is this a bad supplement? No! But also falls spectacularly flat of what it easily could have been. My final verdict will clock in at 3 stars.

You can get this module/encounter-collection here on OBS and here on d20pfsrd.com’s shop.