A Steam-Peek Guide to Orbis 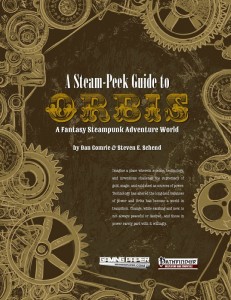 This free teaser of Gaming Paper’s Seeampunk-setting of Orbis is 11 pages long, 1 page front cover/editorial/SRD, 1 page back cover, leaving us with 8 pages of content – though that would rather be 16.

Why? Well, because the pdf has one weird quirk – even if set to single page, it always displays two pages at once, something that usually only happens when a file is scanned in. Slightly annoying, but oh well.

So what is Orbis about? Essentially, it endeavors to be (as far as possible) realitsic, at least regarding the results of the availability of magic – the old guard, those that command arcane and divine might, are essentially the rulers and the machine age has relatively recently upset their power-base, inciting a struggle between the old and new, technology and magic, rich and poor – so far, so compelling – as further enforced by the nice in-character narratives in boxes.

In the following sections on the respective nations, we get a glimpse at potential for racial issues, colonialist discourses and problems and similar relatively unexplored tropes and topics that do offer quite a compelling selection of varying topics to cover via adventures (of which there are at teh very least, 3 planned) – in a world in revolution, a lot of changes can be made and the PCs may well end at the forefront of said upheavals.

All the usual races can be found on Orbis (so no humano-centrism), but orcs and half-orcs are unknown – instead, there are Crocodilians, who get +2 Str, -2 Cha, can hold their breath twice as long as humans, get a bite attack at 1d6 that is treated as if it were an unarmed attack (why not as a primary natural weapon?) and can be used in e.g. monk damage progressions as if it were a regular unarmed attack. Furthermore, they can 1/day move double their movement rate as part of a move action. The race feels a bit strong, but still okay. I hope the bite attack is streamlined for the final books, though. The second new race would be the Hekano – aquatic humanoids (full blown water + air breathing) with 4 tentacles they can use to make skill checks while protecting themselves. They also get +2 stealth,+2 to Int and Dex and -2 to Str. Those tentacles are a can of worms – can they wield weapons? If not, why? Can they activate magic items (via UMD a skill-check…) – do they get better grapple? Urgh…the concept is cool, but I fear that unless handled with much, much care, these guys will end up as terribly broken, even though the concept is intriguing. It should be noted that, while they do get a lengthy write-up, neither race comes with an age, height and weight-table, something I hope to see in the final book.

Now a new rule would be the calibration of weapons – via concise, easy to grasp rules, one component stat of a weapon can be raised, whereas another is lowered – which per se is damn cool – more damage for slightly less chance to hit (i.e. +1 damage, -1 atk) and similar options sound like fun. Magic items that are calibrated lose some of the inherent bonuses they get, but can be calibrated for three benefits instead of the standard two – and here I’m not 100% sold – why? Because threat range and crit multiplier are part of what can be calibrated. That means x5 scythes and picks. Urgh. Stacking with keen etc.- urgh. Also, giving a weapon range may be cool, but is the thrown weapon, if it was prior to calibration a pure melee weapon then treated as an improvised weapon? Uses it str or dex to calculate atk? Can it be thrown at the end of e.g. a flurry? Why not make weapons more usable for different maneuvers instead or provide an anti-calibration to make items especially suitable to destroy the efficient, but fragile wonders? The system is complex and can be rather cool, but I hope that all the moving parts are properly covered in the final books – this, as written, is still very exploitable.

The pdf concludes with a massive map of the world.

Editing and formatting are very good, I didn’t notice any significant glitches. Layout adheres to a printer-friendly, nice two-column b/w-standard and the pdf has no bookmarks, but various beautiful b/w-artworks.

From what I could glean, Dan Comrie and Steven E. Schend have created an intriguing setting full of adventuring potential, cool nations and ideas – but at the same time, this pdf leaves me slightly cautious – while Orbis seems very intriguing, both tentacled humanoids and the calibration-mechanic are cool, but require very skilled hands to properly pull off without breaking the game –  a mastery I’m not 100% sure that is there from what I’ve seen so far. Now this being a free sneak-peek, there’s nothing to lose here and the ideas per se are inspiring – now let’s hope the team Gaming paper has assembled is up to the task and that enough space is allotted to the respective rules. I am cautiously intrigued and hence my final verdict will clock in at 4 stars.

You can get this free first look at Orbis here on OBS!