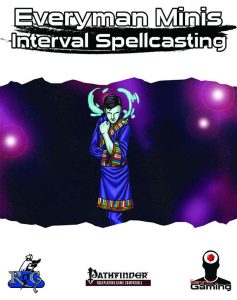 The first of Everyman Gaming’s mini-pdfs clocks in at 6 pages, 1 page front cover, 1 page editorial, 1 page SRD, 1 page advertisement, leaving us with 2 pages of content, so let’s take a look!

So, the basics out of the way, what does an interval spellcaster get, benefits-wise? Upon becoming such a spellcaster, you choose one school of magic and that school is hindered or enhanced, based on the interval of the day, which is concisely defined as a 6-hour sequence: Dawn is 6 A.M., midday starts 12 P.M., dusk starts at 6 P.M. and midnight at 12 A.M. – obviously, the GM may freely adjust these to his or her needs. Each such period is split into three phases: Waxing, essence and waning – all of which consist of 2 hours each.

During the chosen school’s interval period, your spells of the school gain +1 to CL and +1 save DC, if any. During waxing, you increase the CL bonus to +2 to CL-checks for the purpose of overcoming SR. During the waning phase, you get +1 to all saves versus effects from your chosen school. During the essence-phase, you get both benefits and, additionally, once per day, you may cast a spell from your school and apply Enlarge, Extend, Silent or Still Spell sans caster level or casting time increase, adding some crucial, but limited flexibility there. Additionally, you gain an interval ability while your school’s interval lasts, which, unless otherwise noted, is a free action and may target yourself or an ally within 30 ft. This ability may be used once per day, +1/day at 5th level and every 5 levels thereafter.

These benefits do come at a cost: Each school has an opposed school, and, during your school’s interval period, you take a -2 to saves and a -1 penalty to CLs and save DCs of the school. Sooo, what happens if that would reduce CL to 0? I assume that would prohibit casting the spell altogether, but specification would have been nice here. It’s a very minor flaw, but one I noticed due to the otherwise immaculate presentation of the material.

The intervals and how they have been assigned to the respective spellcasting schools makes sense – abjuration is assigned to dawn, enchantment to dusk, necromancy o midnight – this resonates with the respective tropes and can generally be considered to be a rather well-made array of choices. Abjuration nets a save-reroll with casting attribute modifier as an insight bonus, which conjuration provides an immediate action very short-range teleport…which brings me to another minor complaint here: The effect should be codified as a conjuration (teleportation) effect for the purposes of spell etc. interactions. Additionally, the school-abilities, while pretty obviously Su, are not declared as such in the pdf. Divination nets the target a bonus to initiative, enchantment nets a morale bonus to atk or skill-checks, illusion a scaling miss chance. Necromancy yields temporary hit points for 1 minute and transmutation an enhancement bonus to an ability score for spellcaster key attribute rounds.

Editing and formatting are very good, I noticed no serious glitches. Layout adheres to a nice two-column full-color standard and the full-color artworks by Jacob Blackmon are nice. The pdf does no have bookmarks, but needs none at this length.

Luis Loza delivers a damn cool concept: I found myself often wishing that there’d be more such basic tweaks to the spellcasting engine and while this requires a bit of time tracking, it makes for a rewarding engine. The concept is amazing and I sincerely hope we’ll get to see more such traditions, perhaps even suffused with a bit of flavor, special rites etc. – this represents the very basics of the concept and, while it does so rather well, I found myself wishing it had at least provided some basic guidelines and suggestions for further modifications. That being said, I’m complaining at a high level here – my final verdict will hence clock in at 4.5 stars, rounded up due to in dubio pro reo.

You can get this interesting, fun pdf here on OBS!