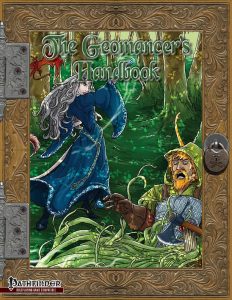 After an aptly-written piece of introductory prose, we dive into the sphere magic here, which begins with the option-array for metal geomancing via the nature sphere, allowing the spherecaster to draw forth metal from the ground and featuring a rather neatly-detailed table. Have I mentioned that this has the options to magnetize metal and throw it, with maximum item-size influenced and governed by level? On a more critical side (haha) – per concentration, metal weapons may be influences as a standard action to increase threat range, though thankfully featuring anti-abuse caveats. At the cost of an additional spell point, metal geomancy allows the object drawn forth from the earth to take the shape of a closer approximation of the respective weapon or ammunition you seek to duplicate. Similarly, making blades or similar weaponry a kind of magnetized sentry (anti-abuse caveat provided) or forming temporarily your weapon into a whip-like version of itself that can be used to better sunder/disarm/etc. can be considered visually impressive, novel options. Interesting indeed. I am, however, somewhat weary of the hemoglobin ability – allowing for at range Con-damage that also draws forth ore – sure, mechanically generally sound…but still, a pretty nasty one, particularly at lower levels, even with save to negate. Using your command of magnetism to have objects rebound to other targets is interesting. For spell points, you may also temporarily gain the stalwart ability (not StalwarD, as the pdf calls it) and since it’s tied to a resource, I actually am not complaining about it for once- but more interesting, at least to me, would be advanced talents to grant objects regeneration 1 (acid) and yes, fire-forged, frost-forged and similar materials are reprinted for your convenience, which is nice -said holistic approach can btw. be found throughout the book, making it pretty user-friendly.

The nature sphere does receive new talents – beyond foggy acid rain, there is a means of aggravating foes…that made me very happy. Why? Because, well, instead of reinventing the wheel here, the pdf takes Everyman Gaming’s excellent antagonize-mechanics from Ultimate Charisma and runs with them…which is rather awesome. On a formal and purely aesthetic side, I noticed some slight deviations from presentation standards: There are e.g. DCs like 14+1/2 HD + WIS modifier noted – when usually, you’d write “Wisdom modifier”, but oh well – my joy about actually getting hardness and hp of pummeled branches and the like supersede this. Heating or cooling metal and/or water, creating lava or nature barriers in transparent or opaque material (from e.g. leaves or wood, glass or stone) – the options are neat. Beyond these, the pdf does sport combo tricks: Like adding sticky resin to plants, smoke to fires…and yep, there is a balanced fast healing option as well, one that can’t get you above 1/2 health…

On the advanced talents-side, the pdf goes all out – with freezing geysers (fire, water, geomancing), the insubstantial condition…and yes, you may draw forth geomancy-born elementals with your power. Better yet – after two rituals, the pdf also sports two detailed incantations and information on hallowed druid circles. So, let’s recap from here: We can now actually play with Magneto’s tricks – so far, so cool!

The book continues to provide new material beyond that: The archaic alchemist is a Mid-Caster using Int and gains a magic talent each level, sporting also a discovery that allows the class to take hedgewitch secrets…and yep, this replaces alchemy. The warden armorist gets a modified skill list, 4+Int skills per level and may only wear “natural” armor. Instead of quick summons and armor training, the archetype receives the nature sphere (full character level = class level) and also sports an auto-confirm for crits, +1 crit multiplier and disarm-immunity as a capstone. The arsenal tricks introduced are intriguing and make use of material from Dreamscarred Press’ excellent Ultimate Psionics, though reproduced herein for your convenience…and yeah, the material is NICE.

The Geosurveyor would be a cool nature-sphere/ranger-crossover with favored packages and is nice. The totemist soul weaver receives a channel devoted to balance: the wounded are healed, the hale are bleeding – with 1/2 max hit points being the threshold and the archetype does get the option use channel balance to add buffs, so-called totem-marks…which can then be dispersed for different boosts…and yes, the playstyle here is pretty awesome. The Yamabushi would be an unchained monk low-caster with a limited spell pool instead of ki, which is also used for powering ki-based abilities.

The pdf also sports feats that emphasize the combo-potential: Alloy Creation allows for the blending of creation and metal geomancing; what about better metal geomancy/telekinesis combo-potential? Bonuses when drawing upon both earth and water – interesting. There are a couple of minor hiccups here, though: The feat that grants access to alchemist formulae has this sentence, for example: “You must spend have a caster level with the entire Nature sphere equal to…” – the “spend” is obviously a hiccup and one that does make the feat slightly more opaque than it should be. Or perhaps you want to hurl burning plantlife at foes? Yup, possible. The traits are also nice and properly codify trait subtype – kudos!

The pdf also sports a bestiary-section, where we are introduced to the Geomancy Elemental Born-template (CR+1) with a sample elemental and multiple Wyrgrove creatures as well as the CR 15 apocalypse rot grub swarm closing the book on a rather high note.

Editing and formatting are good, but not as tight as I would have liked – there are some minor, mostly aesthetic divergences from standardized rules-language, with a couple potentially slightly making the material a bit more opaque. Layout adheres to a green-tinted, nice two-column full-color standard with a couple of great full-color pieces I have not seen before. The pdf comes fully bookmarked for your convenience.

This is the first of the patreon-based Spheres of Power-expansions and penned by Derfael Oliviera…and unless I am sorely mistaken, this is the first book by the author I have read…and it sure is damn impressive! Considering the complex subject matter of metal-interaction and tricks this pdf requires, the rules-language is often complex and shows some distinct talent. Even in the more flawed instances, the pdf still manages to get across what’s intended and, more importantly, the pdf lacks truly problematic components. Personally, I’m not the biggest fan of the 1/2-max-HP-bloodied style-mechanics since they constitute yet another number to track, but there is precedence for those…and when the pdf uses them, they are justified by the unique things the pdf does.

Speaking of which: While certainly not perfect, this book actually proved to be rather inspired in that it does unique things: A whole bunch of options herein simply cannot be reproduced by vancian magic and that is a HUGE plus for me; the combo-tricks and specializations further exonerate this pdf. The complex tricks juggled and overall smart choices made this, as a whole, a more than worthwhile addition to Spheres of Power…and yes, if you’re like me and always wanted to play a Magneto-style character…well, this is it! That being said, this is also one of the cases where I simply can’t rate the pdf as high as I’d like to – the hiccups are there. BUT: At the same time, this book sports basically all those cool subsystems I like (and yes, you can use them sans having their sources) – whether it’s the brilliant antagonize, legendary items or incantations…for me, this increased the usefulness of the book…and it always gives credit where credit is due. With reprints of e.g. swarm traits in a statblock for your convenience, this is a surprisingly user-friendly expansion. So how to rate this, then? Well, in the end, I will settle on a final verdict of 4.5 stars, rounded down to 4 due to the glitches…but considering how much I actually downright love in this book, I will still slap my seal of approval on this, despite the rough patches.

You can get this unique expansion for Spheres of Power here on OBS!

You can support Drop Dead Studios making these cool books here on their patreon!