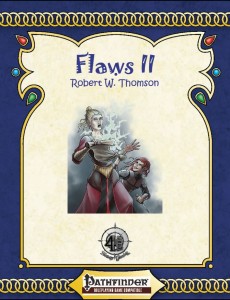 This pdf clocks in at 9 pages, 1 page front cover, 1 page SRD, leaving us with 7 pages of content, so what do we get?

Well, if the title wasn’t clue enough – more flaws. What are they? They can be summed up as anti-feats. They can be taken at 1st level and every character can only have two flaws Each flaw grants 3 skill points or one bonus feat, but if a character takes 2 flaws, he may choose each benefit only once. Flaws can only be taken at first level as written, though DMs may elect to grant them later – at their own peril.

Now each flaw has a specific type of penalty associated with it and a cost to buy it off. Unless I’ve miscounted, a total number of 30 new flaws are contained within these pages. So what do flaws do? well, take the one that makes you an orthodox druid who may not use metal, tools as well as a -3 penalty to all cha-based interactions with civilized folk, with violations potentially increasing this penalty even up to -5. At 5th level (and no sooner), Skill Focus (Diplomacy) as a feat accompanied by atonement may buy off the flaw.

Now if you’ve read the original pdf on flaws, you’ll notice something – the minimum level requirements to pay them off. This is perhaps my favorite piece to be added to the concept herein – in the original pdf, some flaws could immediately be paid off. This, while easily handled in a mature group, somewhat opened the system towards being gamed, while the new flaws do not have that…flaw. Yeah, sorry, I’ll put a buck in the bad pun jar.

Now back to the concepts – being in debt, cursed, addicted (with scaling benefits/penalties!), being too flirtatious or frail or being a monk with an inner turmoil – the flaws herein are generally not only superior to the first book, they are better balanced among themselves and the selection of class-specific flaws is glorious! Being lovelorn, an honor-bound paladin – several of the flaws herein just ooze style and enhance a character’s personality. Phobias, kleptomania, suffering from tribal taboos – the respective array of options is diverse, unique and fun.

Editing and formatting are top-notch, I didn’t notice any significant glitches. Layout adheres to a printer-friendly two-column b/w-standard and the pdf comes fully bookmarked in spite of its brevity – nice!

Robert W. Thomson’s Flaws are damn cool – I’ve been playing with the original ones for some time and my only gripe with them was that they could be gamed sans gentlemen’s agreements. The new flaws do not suffer from this drawback…at least to this extent, which brings me to the *one* thing I do not like about this pdf – Paizo has since introduced minor and major drawbacks in Ultimate Campaign and a short note for each flaw on whether this would be more in line with either for a tighter synergy of systems would be awesome to have. That being said, I am of the firm conviction that the flaws herein can make for more interesting characters and concepts, with plenty of hooks enhancing them, while providing tangible benefits for the players to take them. My final verdict will hence clock in at 4.5 stars, rounded up to 5 due to the low price.

You can get these flaws for an exceedingly low price here on OBS and here on d20pfsrd.com’s shop!