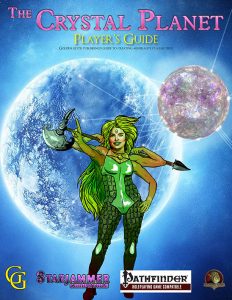 This pdf was moved up in my reviewing-queue as a prioritized review at the request of my patreons.

Okay, so this is a nod to a cartoon show. I am not familiar with that show, so please bear that in mind. This pdf begins with an overview of the crystalline world of Scintilla, talking about places like the Halls of Memory or the Arena of Shards – flavorful and well-written so far!

Chapter 2 deals with the Mineralites – they are basically sentient, polymorphic gemstones that create a holographic, physical form – this unique premise influences the premises of the society of the planet, which is really intriguing – with a lack of a need to eat, sleep or breathe, their society and relations take these unique components into account and weave a surprisingly captivating yarn. The mineralites, racial trait-wise, come in 6 castes – each caste comes with a +2 attribute bonus and a Hardness value that ranges from 8 to 12. Mineralites are half-construct monstrous humanoids with the minerality subtype, normal speed, Medium size, darkvision 60 ft. and two forms: The gemstone form is a Fine object with a hardness that sonic damage ignores and hit points equal to twice the Constitution score and a Break DC equal to twice the Strength score. It has blindsense 5’, and may not move. A gemstone reduced to half hit points, is broken; upon being reduced to 0 hit points, the gemstone is “wrecked” (Basically the equivalent of dying/unconscious). The projected form behaves as a light-based force effect akin to a shadow illusion. The mineralite has a constant, at-will disguise self (italicization missed – not the only one) for visual aspects and voice alterations, though the bonuses granted are reduced to +5, since the mineralite always has monochrome color shades. Mineralites suffer a -4 penalty to saves versus darkness effects and are slowed by being affected by them, with a Will-save to negate. As beings of force, negating that also dissolves the projection.

Mineralite sorcerers with the earth elemental bloodline treat their Charisma at 2 points higher. They may fuse with other mineralites to create fusion forms, but more on that later. They take +50% damage from sonic effects and gain +2 to saves versus diseases, mind-affecting effects, and those that cause exhaustion/fatigue. Darkness effects suppress these bonuses. Mineralites don’t need to breathe, eat or sleep, but must rest for spell preparation etc. Being born into adult status, mineralites are naïve and take a -4 penalty to Charisma-based skill checks and may, as a full-round action, project masterwork weapons from photons. Cool: SR can dispel these weapons.

Mineralites don’t treat damage as other races: The projected form gains hit points (vigor) normally, but winks out of existence upon being reduced to 0 hp. Excess damage affects the gemstone form and the pdf thoroughly and concisely explains the interaction between the different forms, inckuding the aforementioned broken/wrecked/destroyed condition sequence and the explanation of healing etc. The pdf also sports a ton of potent alternate racial traits: 20% miss chance while in bright light, low-light vision, an alternate penalty to Strength-based checks instead of the naiveté penalty, bonus feats at the cost of losing the ability to fuse, concisely codified natural weapons to replace the projected weapon, perfect sight in darkness… interesting.

There is also a Small variant of the race, who is less naïve and slower. Gem Hybrid is an inherited or acquired template that nets CR +1, minimum 2 and represents a hybrid between a living creature and a mineralite. Okay, now, regarding fusion: That would be a full-round action, which may be interrupted as though it was a spell: This form is basically a gestalt of the members, using the best skills, attributes, saves, combat bonuses and the pooled hit points of the participants. A creature can’t end the fusion with more hit points than it had as it entered it, preventing healing-abuse. Similarly, ability score damage/negative levels/etc. are divided among the participants. Conditions apply to all participants, providing a detriment to offset the buffing-advantage the form provides.

Damage is divided evenly upon the fusion’s end and gear is absorbed and does not work while in fusion form. The form is treated somewhat akin to an eidolon with a biped form and 2 evolution points per contributor. The summoner level for variables of these effects is based on the lowest HD of the contributing creatures and the actions of the fusion are determined in sequence by the contributors: Each players gets to control the fusion in alternating sequences. Vetoing an action can be done, and is, rules-wise, concisely presented. There is also a new evolution that blends held weaponry – in a surprisingly concise manner.

Cool: We get a ton of flavored class options, which actually come with flavor-text and cover some ACG classes, the kineticist and even the vigilante. Nice. The pdf also features new class options: the crystallized bloodline for sorcerers nets crystal shard missiles with bleed-inducing shards, chances to negate crits/precision damage and mineralite-apotheosis. The crystal lasher magus must be one of the Small mineralites and is basically, bingo, a whip-magus specialist. The future warden is an interesting brawler – the archetype replaces martial flexibility with the option to gain temporary focus, which can be used to grant basically advantage (roll twice, take better result) – interesting twist of the engine. Harmonic savant bards gain diminished spellcasting, but also lingering performances (thankfully with anti-stacking caveats) as well as AoE-sonic damage etc. Solid. The servant of war is better with teamwork feats and, as an archetype, enhances multiclassing options.

We gain new materials, namely shaped and grown crystalline and 10 types of memory storing crystals – really cool! Cool: there are crystal wyrds and roving bottles as familiar candidates – while not brief familiar stats are provided, we get proper stats for them and they’re both interesting and have unique tricks. Beyond these, we are introduced to crystalline locations, from anchorstones to prism pads and superclusters…speaking of the latter two: Prism pads transform mineralites into light, fire them in space, at a supercluster, and from there to the target destination. NEAT! There are also new weapon qualities. Gembound provides projected weapon synergy at +1, while formbreaking can be particularly nasty versus the projected form of the mineralites. Pressure Suit and Starfaring Robes help with interstellar travel; gem bezel aegis reinforces the gem form of mineralites.

The pdf also sports a ton of Projected Form feats, allowing for e.g. beats shape I forms and a ton of other modifications to the form projections. There also would be feats that e.g. add Extra Arms to the forms, additional uses of class abilities, quicker fusions, improved projected weapons, etc.

The penultimate chapter of the pdf is devoted to new spells – protective bubbles around gemstones, high-level reconstruction of destroyed gemstones, 9 variants of projected holographic constructs – and interplanetary versions of some classics – as well as greater make whole and reprinted classics like planetary adaptation.

The final chapter is devoted to roleplaying advice for playing mineralites.

Editing is very good on a formal and rules-language level: The pdf juggles some VERY complex and unique concepts and does so with panache. On the downside, the same can’t be said regarding formatting: The pdf sports A LOT of missed italicizations, bolded lines that aren’t properly formatted, etc. Layout adheres to a really nice two-column full-color standard and the pdf comes with a nice blend of unique, new full-color artworks and some nice stock pieces. The pdf comes fully bookmarked for your convenience.

Kristopher Cruz and Lucus Palosaari deliver a book that I loved more than I figured I would: The mineralites are extremely unique, creative and surprisingly well-executed, considering the complexity of the tricks the race employs. That being said, I STRONGLY suggest playing an all-mineralite party. Mineralites are very, very strong character options and the strong, cool fusion tricks require multiple characters – internal balance is pretty tight, but compared to regular races, the mineralites will come out on top. That out of the way, it should be noted that they are so different, so creative, that this pdf is very much worth checking out. It’s not perfect, but it oozes that the authors actually CARED, that they wanted to do something creative and new. They succeeded.

This is a selection of very powerful options, with the added toughness of mineralites and the focus on cooperation making the supplement particularly suitable for younger audiences: Death is less likely and the fusion can generate some remarkable scenes, particularly among players that are familiar with the intricacies of PFRPG. And yes, kids can and do grasp PFRPG. For novices, this may be a bit too complex, but as a whole, this deserves being picked up. If there was a scaling option included and if there were less formatting hiccups, this would be a 5 star + seal of approval file. As presented, I can’t go higher than 4 stars for it. I will remain with a heartfelt recommendation for everyone looking for something thoroughly different, though.

You can get this unique supplement here on OBS – currently for just $1.00, which this is definitely worth!