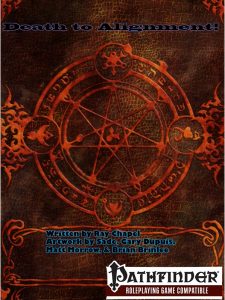 This supplement clocks in at 44 pages, 1 page front cover, ~1 page of artist contacts, 3 pages of SRD, leaving us with 39 pages of content, so let’s take a look!

We begin this supplement with 1 page of opening fiction before diving right into the nit and grit of this book’s lofty goal – abolishing a system deeply ingrained in d20 and its derivatives. And, much like the author, I absolutely LOATHE the alignment-system. I consider it poison for portraying complex characters and have abolished it in my non-playtest games for more than 10 years. It took a lot of work to get there – but can this book take this effort and burden from a GM’s shoulder’s? Well, let’s find out!

This book begins in a rather promising and didactically-relevant manner – by listing influences of alignment on rules-components by material influences: Whether it’s classes, prestige classes, feats, traps or items – the pdf takes carefully stock of material covered and does so in a rather fine manner. After this handy list (which, with the new big rules-books may no longer be complete, but retains its usefulness), we dive into the respective rules-operations, beginning with options to strip classes of alignment. Interesting: The author takes the same route I did regarding clerics, rebranding them as clerics of life and death, respectively. Ranger’s favored enemy outsiders obviously no longer have their subtype, slightly widening that component. Sorceror bloodlines are mentioned and particularly interesting would be the paladin – who now may detect magic, smite *any* hostiles…and replaces good/evil with heavenly/hellish – more on that later. Interesting, btw.: Bless Weapon bites the bullet to account for paladin power-increase and the Cloak/Aura spells are replaced by an alignment-neutral version.

In lieu of a Law Domain, we get the Control domain, instead of Evil Corruption, instead of Good Purity – etc. – these alternate domains are well-crafted and actually sport some interesting and thematically fitting domain powers. Since alignment is good, some rather detailed analysis is given on DR in concert with DR-bypassing. Now I mentioned heavenly et al. as new magic item properties – these are now applied by subtype. (Once again, just fyi – just how I handled that.) Sun blades now are problematic for undead and creatures with light blindness, etc. Overall, this pdf has me seriously impressed so far.

Beyond these carefully-filtered options, the pdf also sports variant alignment systems – the axis of purity vs corruption (see all anime with creepy angel-nazis ever for ideas how creepy purity can be…), a three alignment-system (good, neutral, evil) and a classic one based on Law, Neutrality and Chaos – here, somewhat erroneously called allegiance, but whatever – a total of 5 feats complement this system, which has this fuzzy tint of old-school-nostalgia.

I was somewhat surprised to see the obvious choice not in this book, the one I personally use: Allegiance to a concept of ideology: Be it faith, a form of government or a town. But oh well, I certainly won’t bash the book for taking a different road when it does such a good job at it!

The book is not yet concluded, mind you: We also get some rather interesting though-experiments, the first would pertain a humble paladin and similar concepts that allow for an imho more concise depiction of paladins in a given context, including incremental punishments for code of conduct violations. Similarly, necromancy gets quite a bit of coverage, with multiple takes on why it may be stigmatized – from just having a bad rep to actually being toxic. A further experiment for human interaction that helps a GM realize the relativity of alignment nomenclature can be embarked upon as well and finally, advice on not sweating it too much and finally, the pdf contemplates what makes “evil” evil in game- and honestly…I don’t concur here. RAW, it is pretty easy to make good guys do horrible things in PFRPG. In fact, from an out-game perspective, I consider most good guys EVIL. How many groups out there are like mine and enforce a “killing is not what good guys do, unless there is absolutely no other way”-policy? Yep, figured. The game’s not made that way…and similarly, by applying real world ethics to game ethics, we open a fun can of worms. Just diverging in opinion here this should not be misconstrued as criticism of this book.

Editing and formatting are very good, certainly more refined than in the other books by Quasar Knight Enterprises I’ve read. Layout adheres to a1-column full-color standard, which is a bit annoying if you print this out: The pages have a yellow background that drains ink/toner like crazy. The pdf’s artworks are in full-color and while rabid fans of Purple Duck Games may know them already, they *are beuatiful.* A big strike against a booklet like this, though, would be the lack of bookmarks Without them, electronic navigation is cumbersome and printing this, as mentioned, is a serious drain on the printer.

Ray Chapel’s Death to Alignment is quite frankly by far the best book he’s made in my opinion – it’s concise, logical, well-presented and fun. But I wouldn’t be me if I had no complaints, right? So there we go: One of the unfortunate realities of such a book is that it ages by definition – this is no exception. The game has moved on and this could use an expansion. For example, where would you draw the dividing line between paladin and antipaladin in such a setting? How would you depict shifts in tendencies? What about all the new classes and materials? This book, while detailed, obviously can’t cover all of that…but it would be nice if it did….and that remains, content-wise, my one complaint.

Know what robs this of the seal and an even higher rating? The very printer-unfriendly presentation and the lack of bookmarks. This is a book you’ll use often, one you’ll consult multiple times…and consulting it, in either option, just isn’t that comfortable. The topic is far from exhausted – and I honestly hope this’ll get a sequel. Until then, I remain with a final verdict of 4 stars for a useful, if not perfect book.

You can get this nice, if incomplete toolkit here on OBS and here on d20pfsrd.com’s shop!