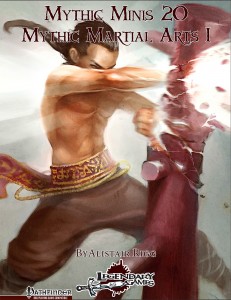 This Mythic Mini about martial arts provides 8 new mythic martial arts, so what do we get?

-Binding Throw: This feat’s mythic version lets you grapple with binding throw 1/round as a free action and do not count as grappled, while your target still counts as grappled.

-Elusive Redirection: When Using Elusive Target, you may substitute mythic power for ki and add 1/2 mythic tier to atk and damage. Solid.

-Enhanced Ki Throw: You need not expend ki to damage the target. You also may expend ki to improve your bull rushes thus executed and use mythic power to potentially daze victims. Nice.

-Ki Throw: Switch places with targets of ki throw, moving into just vacated square. No AoO, does not count as a five-foot-step. Affect creatures beyond your size for mythic power. Cool!

-Spinning Throw: Bull rush via the base feat as a free action, but only once per creature per round. Also receive bonus movement when successfully executing spinning throws and affect larger creatures via ki or mythic power. Smaller targets may be pummeled further via mythic power.

-Stunning Pin: Free stunning fist while using stunning pin, but only 1/round. Additionally, use mythic power to counter spellcasting/escape artist or CMB-checks to escape with stunning fist unarmed attacks. Neat – somehow reminds me of the Arkham Batman knocking out foes he’s knocked down!

Alistair Rigg has chosen perhaps the very worst (or rather: most difficult) martial arts-feats to tackle. Throwing feats. Urgh. Grapple + Bull Rush was complicated before mythic enters the game. So yes, I was not looking forward to reviewing this one – it’s quite a beast, especially since each of the throws has somewhat modified, yet logical additional options. Still, combining these feats will require a truly adept player to avoid confusion. That being said, the content per se is solid and throwing ogres etc. around is awesome. We thus remain with a solidly crafted pdf that provides exactly what’s on the tin, but without the one OMG-How-Awesome-Is-That-moment. My final verdict will hence clock in at 4 stars.