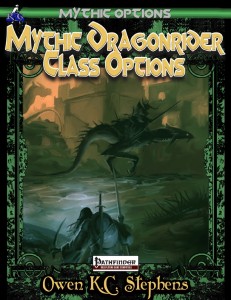 This supplement clocks in at 5 pages, 1 page front cover, 1 page SRD, 1 page editorial, leaving us with 2 pages of content, so let’s take a look, shall we?

I’ve been vocal about one thing. I don’t like the Dragonrider class. It’s the reason I never wrote a review for it. I don’t think a character should just get a draconic mount, even one as limited as that of the Dragonrider, for free as a class feature. In my book, that ought to be an achievement. And yes, I loathe all fiction that dabbles heavily in getting easy access to draconic mounts. I tried. I just can’t get over it. I also won’t go into details of too easy access to assisted flight at low levels. You get the idea. Now in a mythic campaign with all its over-the-topness, I can swallow some of my reservations, so let’s take a look at these mythic bonus abilities for the Dragonrider!

The first page of this pdf is devoted wholly to a neat piece of prose that amps you up for playing a mythic dragonrider, whereas the second page is devoted to 10 new mythic class features for teh dragonrider: These are considered to be 1st tier universal path abilities and can be taken in lieu of a mythic feat.

The most basic ability can be taken twice – once to make the draconic steed a mythic creature, a second time to establish focus with it as a free action, getting essentially rid of one massive crutch of the class that would have me scream bloody murder in a non-mythic context, as it relaxes the chokehold on action-economy the class uses to balance its mount. Resistance to the dragon’s energy type (and at 18th level, immunity), improved low light vision that even may cancel out magical darkness if the CL is below the character level and sharing mythic spells becomes possible.

Calling the dragon to one’s side and healing the mount in the same action can also be achieved – and actually immediately landing in the saddle. Superior Darkvision, Blindsense and Scent also are among the new options.

Editing and formatting are top notch, I noticed no glitches. The pdf comes fully bookmarked with nested bookmarks in spite of its brevity. The cover artwork is awesome, the stock interior art okay.

Owen K.C. Stephens is a capable designer indeed and this pdf offers great options to make your dragonrider go properly mythic. And I stand by my reasoning that the class can work in a mythic context better. The content herein is solid indeed and there is not much to complain about – the options are solid, scale well and there simply is no reason to not really like this pdf. Now I’ve mentioned I have a bias against the class I’m aware of and try hard to treat this neutrally. So I did the next best thing when I couldn’t settle on a verdict and showed this to my players. Their reaction was almost unanimously “Cool, works, not much to complain…but doesn’t blow me away either.” The focus on perception-based abilities, while nice, is a bit persistent for my tastes as well. Now don’t get me wrong – I *love* e.g. the “see through darkness unless CL higher than your level” effects and the like – I like the *design.* But I also think that this could have used one or two truly mind-blowing in your face options that really show off how incredibly mythic and in-your-face these guys are. Being catapulted by your mount’s breath weapon, aerial superiority, better dogfight etc. abilities – that kind of stuff. This is an excellently crafted pdf, but, at least for me, it lacks the spark of utter awesomeness. A must-have for fans of the Dragonrider, my final verdict will clock in at 4 stars.

You can get this mythic toolkit for the dragonrider here on OBS and here on d20pfsrd.com’s shop.