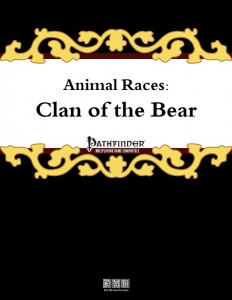 This installment of the Animal Races-series clock in at 13 pages, 1 page front cover, 1 page editorial, 2 pages of SRD, 1 page back cover, leaving us with 8 pages of content, so let’s take a look!

Much like prior installments to this series, we herein receive rules for PCs belonging to one of the tightly and concisely-presented animal clans, with bear therians this time being the focus of attention.

Bear Clan therians are humanoids with the adlet subtype, have a base speed of 30 ft., scent, natural armor +1 (increasing to +2 at 10th level) and begin play with a natural primary bite attack one step in damage below what would be considered normal for a creature of the size, with the option for upgrade..but more on that later. Members of the bear clan may select one of 5 basic attribute arrays.

Now I already mentioned the clan heritage feats – the base bear clan heritage feat allows for the gaining of claws, faster movement, loner survival sans food or water (and overheating, allowing you to go some days sans food and water), better bites, claw attacks and additional damage while grappling. Upon taking the feat 6 times, you may elect to become large instead – and yes, after careful consideration and some math, the entry barrier, prescribed by both feat-taking and level-restrictions, feels right to prevent low-level reach abuse. The panda does not gain this capstone.

A cool, thematically-fitting feat makes members of the bear clan less susceptible to swarm attacks (with DR and immunity to distraction) and another feat for limited daily shapechanging into human form. A new feat allows bears to gain stonecunning and polar bears may select the cold resistance racial trait.

In the cool tradition of the series, we receive both information on the genealogy of the clan as well as the clan’s folklore, providing information on some of the fantasy monsters and how they pertain to the myths of the clan. A racial deity can also be found herein and, like in other installments of the race, racial traits may be exchanged for a heraldic symbol, with each granting a bonus feat, but also imposing a penalty on either a save or initiative.

Now the pdf’s revised edition has received probably the coolest update in any of the revised animal races so far – we receive two massive games enjoyed by the Clan of the Bear – which can be used as awesome encounters, competitions or skill-challenge-style challenges – Tooth and Claw Fishing and Twig Racing. I absolutely ADORE these – they do an incrdible job at further fleshing out the race and provide inspiring dieas for DMs – absolutely awesome! The pdf now also sports a new bloodrager bloodline, the boreal bloodline, which allows you to add ice damage to your attacks, nets you the racial clan heritage bonus feat and is generally a nice, fun, ice-themed bloodline.

Eric Morton’s take on clan bear is absolutely awesome – and better yet, whereas before, the supplement was neat, but not perfect, he has updated the supplement to sport absolutely stunning, awesome new content while also fixing all issues I pointed out in my first review – this is absolutely great and deserves to be acknowledged. My final verdict for the revised version clocks in at 5 stars + seal of approval – now can we have more of these damn cool racial games/challenges?.

You can get this awesome revised edition here on OBS!