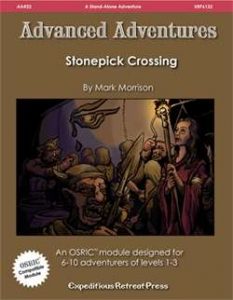 This adventure/supplement clocks in at 13 pages, 1 page front/back cover, 1 page editorial, ½ a page SRD, leaving us with 10.5 pages of content, so let’s take a look!

This review was requested by a supporter of my patreon, to be undertaken at my convenience.

All right, so, as always, this supplement was designed with the OSRIC rules in mind, though formatting conventions do somewhat deviate from the system’s established standard. The module is intended for characters level 1 – 3, though at first level, the experience of running this can be rather deadly. A well-rounded group is certainly suggested, and it should be noted that there is actually plenty of roleplaying in this supplement.

Supplement? Didn’t I claim this was a module? Yeah, well, both are correct. You see, in a way, this one treats a specific settlement like a dungeon, with a more conventional dungeon-level below.  The module does not sport read-aloud text.

All right, and this is pretty much as far as I can go without diving into SPOILERS. Potential players should jump ahead to the conclusion.

All right, so Stonepick Crossing is testament to two dwarven virtues: Ingenuity, and the tendency to go overkill. When a clan of dwarves fought a particularly nasty, and well-entrenched goblin tribe, they refused to deplete their ranks by attacking the goblins’ excellent defensive positions, instead crafting a colossal dam – the eponymous Stone pick Crossing. The dwarves have moved on, the goblins have been drowned, and in the centuries since, the dam has persisted (for the most part!) the test of time. The dwarven craftsmanship has made the dam an excellent place for a waystation/trade-type of settlement, and as such, this settlement was born, with the locals living in the buildings left by the dwarves of old.

Stonepick Crossing as a settlement sports 3 levels – two levels on the dam, and one below the water surface; the latter, obviously, represents aforementioned more conventional dungeon level, though it’s not a place that PCs will immediately fin. Instead, they will interact with the surprisingly vivid cast of characters that may be found here. The short encounter-tables and detailed notes make it rather simple to generate a sense of an organic, lived-in location, and there is quite a lot of loot to be found. Due to the concept of a dwarven building repurposed as a village, there even are secret rooms that smart PCs can find – for this trade-hub has a dangerous black market that can be a very dangerous encounter if the PCs don’t behave. Beyond the knowledgeable beggar, we also have rather dangerous haunted locales here, and Stonepick Crossing has been suffering from mysterious disappearances, which are investigated by a none-too-subtle/smart investigator who might make for a good contact for good PCs.

At this point, I should also note that these disappearances actually are due to a rather dangerous individual capturing targets and selling them off into slavery. The dam-structure also means that not all rooms on e.g. the deep level are connected – one of the halves of the lowest level has seen the magics that keep out the water partially fail, flooding the place and providing egress to rather dangerous humanoids that can lead to further complications, including crabmen. And yes, ancient dwarven treasures may be found by curious and capable adventurers that don’t fall prey to the dangers of this place.

Editing and formatting are good on a formal and rules-language level. Layout adheres to the series’ two-column b/w-standard, and the pdf has no interior artwork beyond cover and editorial page. The cartography is b/w and functional, but not spectacular. No player-friendly maps are included. The pdf comes fully bookmarked for your convenience.

This is the first offering by Mark Morrison I’ve reviewed, and it’s a surprisingly cool one – the combination of settlement and dungeon has been pulled off with surprising panache. In spite of the supplement’s brevity, Stonepick Crossing feels like an organic place, and I managed to picture the inhabitants rather well. With multiple sandboxy plotlines that may or may not converge, it’s a classic “insert PCs for adventure” type of module, one that manages to pull off its angle rather well indeed. The one issue of this one would be that the word-count gets slightly in the way of the module: Stonepick Crossing is a VERY cramped space, and unless you expand the settlement to encompass buildings beyond the dam, the settlement feels very cramped and claustrophobic, and lacks the infrastructure to support its populace and services. The trade-angle only can account for so much, and personally, I’d suggest GMs using this to add a few farmers beyond the dam, some additional places – you get the idea.

With a few more pages allowed, the author could have presented a rather great offering here – it certainly knocks the White River Run-adventures out of the water. Haha. Sorry, couldn’t resist. All in all, a fun supplement/module, and easily one of the more impressive installments in the series. My final verdict will be 4 stars.

You can get this neat supplement/module here on OBS!