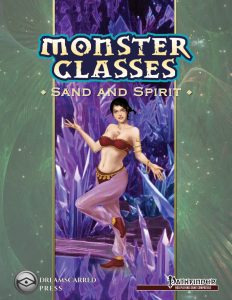 We begin with the janni, which are native outsiders with darkvision, a natural armor bonus of +1 and +2 Strength and Intelligence. The racial class spans 6 levels, gets d10 HD, 6 + Int skills per level, good Fort- and Ref-saves and a total attribute gain of +6 Str, +4 Dex, +2 Int, +2 Cha, +4 Wis, for a net gain of 18 points. The class nets proficiency with simple and martial weapons and light and medium armors. Janni may only remain on the elemental planes for 48 hours before taking damage, 1 per hour – while I am aware that this is a reproduction of the janni’s special ability, I still wished it had been modified. 2nd level nets fire resistance 5, which upgrades to 10 at 5th level. Spell-like ability-wise, 1st level nets 3/day speak with animals, 2nd provides create food and water 1/day, 3rd nets 1/day invisibility (which upgrades to 3/day at 4th level) and 6th level nets ethereal jaunt 1/day and 3/day plane shift to material, astral and elemental planes only. 2nd level nets telepathy 30 ft., which is upgraded to 50 ft and 100 ft at 4th and 6th level, respectively. 3rd level nets Improved Initiative and 4th level nets 20 ft. perfect maneuverability fly speed, which is early, but not unduly so – no complaint here. I do, however, complain about change size: Its referred spells are not italicized and the text contradicts the table: The text notes 4th level, while the table unlocks it at 3rd. The ability can be used an additional time per day at 6th level.

All in all, one of the better entries in the series, in spite of the hiccups that still haunt it. However, while the pdf predated it, the superior “In the Company of Genies” has since then been released…which kinda takes away the main case I could make for this race, as Rite Publishing’s book is vastly superior in details, how easy you can integrate it into your game…etc.

The second class herein would be the mummy, who receives +2 Str, -4 Int, is undead, has darkvision 60 ft., +2 natural AC and vulnerability to fire. The monster class spans 8 levels and nets d10 HD, 4 + Int skills per level, proficiency with simple weapons, 3/4 BAB-progression, good Will-saves and begins at 1st level with a 1d4 slam attack that improves its base damage to 1d6 and 1d8 at 4th and 8th level. The natural armor bonus increases by +2 at every odd level. 2nd level nets DR 1/-, which increases to DR 3/- and DR 5/- at 4th and 6th level. 3rd level unlocks despair, which has a 10-ft.-reach and renders the target shaken the target on a failed save. This increases to 20 ft. and allows for an alternate paralysis effect for 1 round. This paralysis is increased to 1d4 rounds at 7th level, which also extends the aura farther, to 30 ft. THANKFULLY, the aura has a once-in-24-hours-caveat akin to hexes, which prevents it from being horribly broken and reduces it to being strong, but manageable. 8th level unlocks the signature mummy rot. Attribute-gain-wise, the mummy receives +12 Str (!!!), +2 Wis, +4 Cha, making it very lopsided. Odd: The reduced movement rate of the mummy is not represented by the race. As a whole: Not a fan.

Next up would be the rakshasa, who receives +2 Dex and Int, is a native outsider shapechanger, has a fast speed of 40 feet, darkvision, +2 to Disguise and Bluff, +1 natural armor.

The racial class spans 10 levels, nets d10 HD, 6 + Int skills per level, good Ref- and Will-saves, full BAB-progression, proficiency with simple and martial weapons. The class gets 1d4 claws at 1st level, a secondary 1d6 bite at 2nd level and begins play with SR equal to 10 + HD, increasing that to 15 + HD at 5th level. At first level, we get 1/day change shape (spell-reference not italicized, with similar cases in the table). At 2nd level, 5th and 8th, the racial bonus to Disguise increases by +2 and 8th level adds +2 to Bluff. 4th level nets 1/day detect thoughts, +1/day for every level thereafter, with 9th level making that at-will. 5th level nets DR 5/good and piercing, which increases by +5 at 7th and 10th level. Spellcasting as a sorceror at minus 3 class levels is unlocked at 4th level.

Attribute-gain-wise, the rakshasa receives +6 Str, +8 Dex, +12 Con, +2 Wis, +6 Cha, for a total of 34 attribute points gained. I could go on picking this apart, but the monster class has the unpleasant task of going up against the SUPERB, stellar “In the Company of Rakshasa“, which not only has the better balance, it also has culture galore, more detailed class options and manages to hit the flavor of rakshasa, their decadence and hunger, infinitely better. If you want to play a rakshasa, get that book instead. It’s one of the best racial books for a playable monster I have ever read.

The final creature within this pdf would be the sentient flesh golem, who receives +2 Str and Dex, -5 Cha, is a construct with darkvision and 30 feet. Full construct immunities (minus mind-affecting: They can be hit by that at least.) at 1st level. And there goes the utility for pretty much all but the most high-powered of campaigns. 20 bonus hit points for being Medium. Yeah…I can see campaigns making that work…but it’s nowhere near something I’d recommend. Beyond that, they get low-light vision as well as +2 natural AC.

The 9-level monster class nets +2 natural AC at 1st level, increasing that by a further +2 at every odd level thereafter for a total of +12 and begins play with a 1d4 slam attack that is increased to 1d6 at 4th, 2d6 at 7th and 2d8 at 9th level. They begin play with SR equal to 10 + HD and at 2nd level, gain DR 1/adamantine, which increases to 5/adamantine and 10/adamantine and 6th and 8th level. 4th level nets a size-increase to Large and 9th level unlocks magic immunity. Attribute-gain-wise, the class only receives +8 Str…but considering the immunities…that’s good. Still, Fat Goblin Games’ Player’s Guide to Vathak has a significantly less problematic flesh golem-player-race.

The pdf also sports a total of 12 feats for the races here, some of which are very much cool: Rage of the Machine, for example, 17day prevents the construct’s destruction when reduced to 0 hp, instead making it go berserk at 1 HP and cannot be destroyed by hit point damage. Similarly, being able to smash traps rather than disarm them is a cool idea. 1st level-only aquatic mummies, flight tricks…pretty cool stuff here, though e.g. using Int or Cha for Fort-saves isn’t something I enjoy. gaining a hope aura instead of despair is interesting, as is the ability to ritualistically make a curse trap. Annoying: Spell-references are not italicized here either. The pdf concludes with a glossary.

Jeffrey Swank’s Monster Classes covering these roughly desert-themed beings are…decent? The janni is okay, if not too exciting – and as per the writing of this, “In the Company of Genies” has hit sites…so they may actually be considered to be redundant as well. The golem is at the same time OP and fragile as all hell, basically requiring the very strong Rage-feat…which can result in weird low-level encounters: Throw the golem in the room, nothing can kill it, it kills everything, repeat the next day. I *like* the idea here, but I think the execution is flawed. The mummy is front-end heavy…and the rakshasa is just redundant in any world where Rite Publishing’s superior “In the Company of Rakshasa” exists. Similarly, the “Player’s Guide to Vathak “covers the golem-angle better…and I’ve seen better balanced undead PC races by the dozen. Which leaves me in an odd place. This is not by any means the worst installment in the series, but I can’t really figure out a reason to get it. I tried hard to like anything herein and only partially succeeded. If you have a less pronounced library of amazing races than I do, you may get something out of this, I wager…but considering the context, I can’t go higher than 2.5 stars, rounded down for this one.

You can get the whole subscription here on OBS.