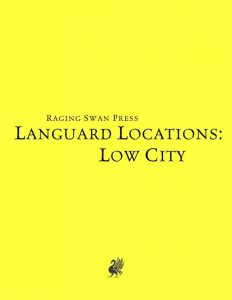 The Patfinder version has pretty much been almost system neutral anyways, but it should be noted that, for the nitpicky, this version has properly replaced new class names with their old-school equivalents – you won’t find the class designations of rogues or wizards within, instead making use of thiefs and magic-users. It’s a small touch, but I know from experience that some of my readers care about this.

Creighton Broadhurst, Jeff Gomez and Amber Underwood provide the level of detail and finesse that elevates Languard’s already impressive City Backdrop file even further. The detailed descriptions of the low city’s surprisingly diverse (and adventuring-relevant) locations breathe a life into these streets that make it very easy to visualize this – with some time, your PCs will be able to say “Oh, and then we ran down the street across the white tower, towards…” – it’s that…in lack of a better word, “tangible.” Languard’s low city feels organic, plausible and diverse, the characters mentioned are interesting, and there is a ton of potential adventuring to be had here. What more could you ask for? The system neutral version has been changed subtly to represent the old-school nomenclature, so no complaints there.

Missed City Backdrop: Languard? It can be found here!