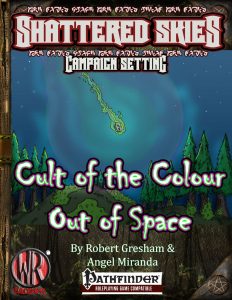 This pdf clocks in at 18 pages,1 page front cover, 1 page editorial/ToC, 2 pages of SRD, 1 page back cover, leaving us with 13 pages of content, so let’s take a look!

So, this first very positive surprise you’ll notice when reading this pdf would be the general set-up that is presented in the history of this cult. At this point, we have all seen iterations of the color in fiction or CoC/ToC-supplements before, but this pdf actually puts the influence of the entity in an interesting sequence of events: You see, the cult’s locale is situated within the Bright Mountain Valley, where the local fey population, xenophobic korreds, have been fighting a losing battle versus the approach of civilization.

The ever more desperate fey resorted to conjuring forth lethal plant-creatures – though that backfired big time; turns out calling mindslaver molds with imperfect control over them is a really bad idea and so the fey fell to the mold’s influence. Worse, the color that arrived hijacked the mold, creating a horrid dual layer of control the deadly adversaries. While there are a couple of typos like xatabay instead of xtabay, but still, the set-up is intriguing and makes a surprising amount of sense within the context of the game. The contact of foreigners with the color led in a growing legend that brought a dragon to the vale as well – a being who ended in a stasis between destruction via the color and life, becoming another insane herald for the cult. So yes, the presentation and angle provided here blend the fantastic and the Lovecraftian themes very well with the crunchy realities of PFRPG; basically, this is fantasy with mythos-themes, as opposed to horror with sprinklings of fantasy.

Now, the pdf also contains stats for some of the creatures that are now controlling the cult – the mind-enslaved color-blighted korreds and the mindslaver mold, for example. The statblock of the korreds does unfortunately contain some glitches. Beyond these two, the pdf also introduces us to Ichabod Krona, a somewhat cringe-worthily-named occultist of the sinister savant archetype. The man has studied the mysterium magnum, a dread grimoire, and his has brought him towards the cult. The aforementioned book is btw. included in the pdf: The cursed book has some nice benefits for those with Psychic Sensitivity or psychic spellcasting and can help automatic writing…but this also comes with a pretty random and evocative array of strange side-effects when using this ability…side effects that are not only creepy, but can provide some further adventuring angles. Nice job there.

The aforementioned sinister savant archetype is included in the book as well: At 1st level, the occultist replaces occultist implements with the ability to use magical books and scrolls as implement focuses, provided they contain a magic or effect related to the implement school to be emulated. The lack of implement schools means that the archetype has also modified resonant power: Whoever reads the implement in question gains a +2 bonus to Knowledge for every 2 points of mental focus invested, with a maximum of 2 +1 for every 2occultist levels.

Reading an implement takes 1 round – that should probably be “full-round action”, considering the benefits conveyed. At 4th level and every 4 levels thereafter, the character has a 50% chance to receive a random insanity and also learns 1 level-appropriate spell from the implement schools known, replacing shift focus. As a capstone, the character receives full information on a CR 20+ creature of doom and may extol its horrid powers, potentially causing panic. The powerful diversity of the variable access to diverse implement schools is offset a bit. However, at the same time, the archetype has a few formatting hiccups – spells not italicized, wording that could be a bit more precise…but it remains a functional option.

I already mentioned the horrible dragon, kept in stasis between life and annihilation, the green brute Novastarov, kept alive by her ring of sheltered vitality. Her CR 13 iteration was included, though the powerful ring she has is imho underpriced as far as I’m concerned. Similarly, the sheltered vitality spell that provides immunity to all ability damage and drain as well as fatigue and exhaustion is utterly OP for its level and needs a serious whacking with the nerf-bat.

That as an aside, but the pdf does contain more than those powerful scions of the cult – it also contains the stats and precise motivations of the dread glowing god, a colour from out of space with the mighty template, with history, lore DCs and detailed write-ups – though, once again, the rules-components have some flaws – Knowledge (dungeoneering) is e.g. written as “knowledge dungeoneering (oozes) – which does not exist. That being said, the lore section and components of this write-up otherwise are pretty well-presented and actually evocative.

Editing and formatting are okay on a formal and rules-language levels – while there are quite a bunch of obvious errors in those components, they generally do not tamper with one’s ability to employ the material. Layout adheres to a nice two-column full-color standard and the pdf sports several nice full-color artworks. The pdf does not have any bookmarks, which, in conjunction with the disabled text-copying option, constitutes a severe comfort-detriment when using this pdf.

Robert Gresham, with additional writing by Rodney Sloan and Angel “ARMR” Miranda, provides an interesting cult that could have easily reached the lofty levels of excellence. In fact, this pdf does make for a viable purchase if you’re looking for flavor, for ideas and the like – the pdf feels like it does offer heart’s blood, careful consideration of the game’s realities. That’s a big plus for me. However, if you are one of the people who expect flawless rules, you will like the prose, sure…but the execution of the rules-relevant components leaves something to be desired and shows that this pdf could have used the hand of an experienced editor and/or developer. From the utterly OP item/spell to the other components, most rules herein sport deviations from standards, hiccups and the like and may really gall some people.

As a person, I actually did derive some joy from reading this book – the very stringent and logical entwinement of the tropes of traditional fantasy and mythos makes for an intriguing offering. At the same time, as a reviewer, I have to rate the formal criteria of this pdf as well, and beyond the comfort issues, the glitches do accumulate. My final verdict will clock in at 3.5 stars – those of you looking for mostly flavor should round up…but my official verdict, alas, can’t do that.

You can get this interesting cult here on OBS!