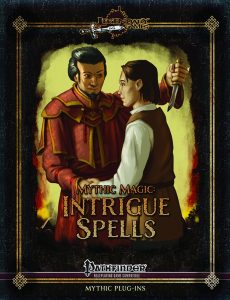 This installment of the Mythic Magic-series clocks in at 32 pages, 1 page front cover, 1 page editorial, 1 page SRD, 1 page ToC, 2 pages of introduction, 1 page advertisement, 1 page back cover, leaving us with 24 pages of content, so let’s take a look at this book!

So, at this point, you probably are familiar with what these books by now – if not, the pitch is simple: We get mythic versions of all spells contained in Ultimate Intrigue and thus, we begin with an alphabetic list of the spells featured within this book. However, there is an important paradigm shift in this book, courtesy of the changed design paradigm Paizo introduced back in Occult Adventures and continued in Ultimate Intrigue. You see, the adaptations of spells in earlier hardcovers have been somewhat different in tone and focus; numerical bonuses and damage types, as a whole, obviously lend themselves to an adaptation to mythic adventure contexts based on numerical escalation; you get the idea – expend mythic power for x, use mythic surge in conjunction with it for y.

That type of design simply does not gel too well with Ultimate Intrigue’s spell selection. What do I mean by this? well, the first spell already makes this clear: Mythic absolution allows you to retain specific charms and compulsions, while still allowing for code of conduct violation rerolls, with the 4th tier augment allowing for the expenditure of 2 uses of mythic power, with better saves for the target. Similarly, aerial tracks augment options allows you to automatically succeed Survival checks of DC 40 or below if you power it via mythic power. Aphasia can bypass tongues and may be upgraded to behave basically like a curse, audiovisual hallucinations actually react appropriately towards damage inflicted and may receive more complex instructions.

Mass Charm Person is harder to detect when used in its mythic iteration, while codespeak significantly increases its duration – amazing: The mythic version actually PERMANENTLY teaches to read and understand the code…which is amazing for complex spy-games. Similarly, making a conditional curse hereditary represents an amazing augment and conjuration foil’s mythic iteration may represent a numerical upgrade, but also includes a variety of tactical options. The crime spells allow for multiple rolls and the caster’s choice of the result taken. Dark whispers affects up to two creatures per tier beyond line of sight/effect and may even imitate voices. Deadman’s contingency’s upgrade allows you to actually layer several of them upon each other. False Belief allows for the implantation of fake memories, while e.g. handy grapnel is indeed a full-blown Batman-level super-grapnel. Cool: Hollow Heroism is incorrectly identified by probing magic as mythic heroism, while illusion of treachery allows for a significantly increased control.

Casters of majestic image may employ other spells in conjunction with the spell and phantasmal affliction may impose curse, poison or wasting-like benefits. Rumormonger also gets an amazing upgrade, providing basically a rumor-web, which can really make high-powered investigations provide a whole new assortment of options -same goes for trace teleport….and treacherous teleport.

Now there are also a couple of different spells that do not go this way – true prognostication, for example, has a higher maximum chance of success and does not have a cost. Undetectable Trap continues until the next time the trap is triggered, while also increasing the DC to notice the trap…and no automatic detection chances for anyone. Vicarious view has a longer duration and may be used in conjunction with senses of a spell level lower than your tier. So yes, there are a couple of diverse spells that are a little bit less extensive in their options.

Editing and formatting are top-notch, I noticed no significant glitches. Layout adheres to legendary Games’ two-column full-color standard and the pdf features several nice full-color artworks, though fans of Legendary Games will probably be familiar with several of them. The pdf comes fully bookmarked with extensive bookmarks for your convenience.

Alex Riggs and David N. Ross went above and beyond in this mythic magic-installment: The spells and their effects have been seriously expanded, allowing for a wide variety of brilliant gambits to stack upon another. In fact, this is probably the best Mythic Magic-installment so far. Why am I saying this? Simple: This book has managed what no other Mythic Magic book made me want to do: Play a very specific game. As some of you may know, I’m a huge fan of Batman, Death Note and similar battle of wits type of scenarios and this pdf’s spells allow for the truly epic battling of magical wits: The spells in the base book already had this Batman/Sherlock detective-battle-of-wits type of vibe, but once you add this book’s vastly expanded options to the fray, things become amazing, allowing the PCs and villains to pit complex gambits against one another…and boy, do I love that! I really want to make a truly intrigue-heavy game with these!

Expertly crafted, this installment is absolutely inspired and allows the GM and players to engage in a whole new level of deception, subterfuge and style. This is an amazing, diverse and extremely well-made pdf, well worth 5 stars + seal of approval.

You can get this absolutely inspiring collection of mythic spell-upgrades here on OBS!