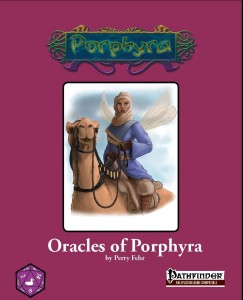 The first archetype we get here would be the Deadmagic Oracles – these oracles are devoted to returning magic to dead magic zones à la Mana Wastes – as such they have a unique restriction – they may only take revelations with the (ex)-type. If they can no longer take a new (ex)-revelation, they cannot progress in the class any longer. You better choose your mystery carefully with this one! A list helps with this choice, though. Curse-wise, we also get a restriction – no haunted-curse, no curses that provide access to spells. At 12th level, all deadmagic oracles get antimagic zone as a bonus spell. Now spellcasting is weird here – these oracles can essentially cast spells as extraordinary abilities – as long as the player can convincingly explain it. Essentially, the balance is all up to negotiation between player and DM. Also, spells for deadmagic oracles usually require material components thus. Sorry. this is…broken. Extraordinary abilities don’t have verbal or somatic components (and usually not even material components), and the ability does not specify they retain that. Furthermore, extraordinary abilities cannot be dispelled, counterspelled etc. – which makes them the strongest of abilities. The pdf would have needed to clarify that spellcasting essentially remains intact, including concentration etc. The ability is intended to be flavorful, but ends up one of the most broken pieces of crunch I’ve seen in a while. Which sucks, for clearly, the idea is cool – especially the option to 1/day cast a spell in dead magic zones (later up to 3/day) and a capstone that transforms the oracle into a linnorm – permanently, I might add, make for damn cool options.

We also get 4 new mysteries, first of which would be the apocalypse: At 11th level, one revelation allows you to quadruple a chosen energy type’s damage once per day. Yes. Quadruple. Oh, it stacks with empower spell and maximize spell. Do I even have to explain the issue here? Beyond balance, it also is per default a standard action as a revelation and thus incompatible with most spellcasting. Another revelation allows you switch a known spell with another one from your spell-list, provided you have a scroll of the spell. Is the scroll consumed? I assume so, but overall, this is broken either way – the oracle’s limited array of spells is one of its balancing factors and this completely gets rid of that factor. Fire and Brimstone deals damage – half of which is fire. What the other half is…no idea, the ability doesn’t tell. Too many broken pieces in an otherwise interesting mystery.

Oracles of the sigils mystery allows you to render adversaries shaken or even stunned with your sign. Unfortunately, the ability fails to specify what type of action making this gesture is, though I assume the default standard action for the activation of a revelation. Wildering in Rune Magic (I.e. Words of Power) and bloodrunes (Legendary Classes: Rune Magic) is also possible – all in all, a solid nice little mystery. The Shifting Sands mystery has some cool ideas – drying up massive quantities of water, guarding yourself with sand armor, immunity to poison, affecting vermin etc. are added to the obligatory endure elements and calling camels, sinking foes in the ground – all in all, perhaps the coolest desert-themed ability-suite I’ve seen in a while. Two thumbs up!

The final mystery would be the Wasteland mystery, which allows you to clad yourself in armor made from hair, skin etc. summon phantom chariots, emit a sonic-damage dealing scream, commune and communicate with nature, thrive on minimum food and water, be a master of your terrain and finally glide through it as per the ability and spell. Again, nice mystery.

We also get a sample character, with Mijaer, an orcale level 3 using the unfortunately broken apocalypse mystery.

Editing and formatting are good, I noticed no too excessive issues. Layout adheres to a printer-friendly two-column standard with a pixelated excerpt of the Porphyra-map being the one piece of full-color artwork. The pdf comes fully bookmarked for your convenience, which is neat to see.

This pdf is decidedly high concept and has glorious ideas – but author Perry Fehr is sometimes simply sloppy with his crunch – the apocalypse mystery could have been easily cleared up and the archetype is awesome in concept, but boils down to “Tough luck balancing that, DM – you won’t get good guidelines or rules herein – have fun devising tons upon tons of material components and arguing a lot with your player.”. That is a cardinal sin of commercial roleplaying design and is a huge no-go. I’m all for fluff and sensible solutions between DM and player – but this archetype opens an infinite can of worms and discussions and is simply broken as provided. Which sucks, for the idea and rest of the archetype are cool. In fact, this pdf suffers from some abilities that just look like they’ve been cranked out, when some refinement could have made them actually work. On the one hand, some glitches would have me rate this down…on the other hand, what works is actually exceedingly  cool and the price-point is very low. Still, with the issues herein, I have to reflect that in the rating and thus, my final verdict will clock in at 2.5 stars, rounded up to 3 for the purpose of this platform, though only by a small margin.

You can get this cool, but flawed supplement here on OBS and here on d20pfsrd.com’s shop.