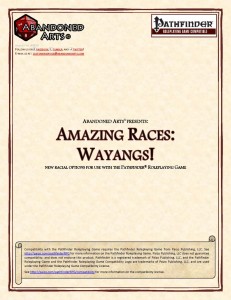 This pdf is 4 pages long, 1 page front cover, 1 page SRD, leaving us with two pages of content, so let’s take a look!

The pdf kicks off with 4 new feats for Wayang:
-Dissolution’s Chosen: Resistance 5 to negative energy, use the dissolution’s child racial trait 10 rounds per day.

-Dissolution’s Aspirant: +10 ft base rate and full benefits of the light and dark racial trait while using dissolution’s child.

-Dissolution’s Ascendant: Constantly gain the benefits of the light and dark racial trait – suppressable as an immediate action. There’s a glitch here, the text calls teh racial ability “light and shadow” instead of “light and dark”.

-Shadowy Sprint: +10 ft movement when starting a movement in an area of dim light.

Wayangs may now also chose from one of three new traits, Dissolution’s Disciple allows you to flicker for 2x character level days after being slain, always reincarnating into a wayang when raised via reincarnation while you flicker. You may also ignore size-penalties to intimidate or get +2 when checking versus cha-based skills.

There also are tow new alternate racial traits, one allowing you to blend with shadows better for a 30% miss chance and the other allowing you to see 5 ft. even in magical darkness.

The race’s archetype is for the monk class, the so-called marionette: Evoking a creepy and rather evocative style, marionettes are a creepy kind of monks that uses a style reminiscent of the eponymous dolls – getting e.g. a 5-foot step at the end of movements of at least 20 ft., slow falling even without adjacent walls, limited access to whirlwind attacks and a high level ability that dominates a creature’s body as if dancing to the marionette’s strings. I really, really love this iconic archetype!

Conclusion:
Editing and formatting are very good, I didn’t notice an undue amount of glitches. Layout adheres to Abandoned Art’s 2-column no-frills standard and the pdf has no bookmarks, but needs none at this length.
This pdf is what the series should be about in my opinion – feats and traits that develop racial abilities and add to the uniqueness of the uncommon base-race – and the monk-archetype is simply awesome – weird, uncommon and oozing flair. While the glitch I encountered could have been avoided, I thoroughly enjoyed this pdf’s blending of crunch seeping style and interesting racial options – and even sans the Wayang, the monk archetype alone makes this pdf worth the low asking price. My final verdict will hence clock in at 4.5 stars due to the glitch, but still rounded up to 5 and studded with the seal of approval due to the archetypes’ awesomeness- anyone looking for a monk-archetype that is DIFFERENT, go check this out!

You can get this great installment of the series here on OBS and here on d20pfsrd.com!