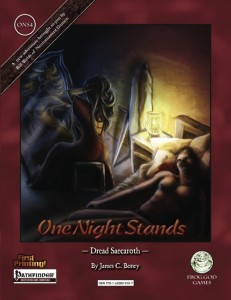 This being an adventure-module, the following contains SPOILERS. Potential players may want to jump to the conclusion.

Still here? All right. Saecaroth is a name that evokes terror, for it once was the name of a Babel-like Tower devoted to 3 thoroughly vile deities – while the tower was razed by one legendary Paladin named Ardanicus the Younger, the dungeons below the tower saw said hero fall to the intervention of the dread deities, thus leaving the most powerful of the evil priests sealed in the bowels of the earth, festering there and waiting for the right time. The players in this module set out to explore these dread levels below the surface. Intended as the first part of a series, this pdf features the first two levels of Dread Saecaroth.

And be aware – this module is old-school and deadly in the Frog god Game-tradition – on par with Rappan Athuk in the lethality of some encounters even. Wusses need not apply, as the initial encounters show: 24 bandits and 2 named leaders occupy the first rooms – when handled smart by the DM, the PCs will realize (especially if they are 1st level) here that pain is to be expected and that is just the beginning: Other sections of the module feature battles versus 3 (!!!) Phase Spiders and a particularly deadly hallway, where ghouls attack through the grated floor or gas-traps complemented by gricks. The rooms per se feature often interesting pieces of loot or magical effects that go beyond casting spells at the PCs, lending a pervading atmosphere of creepiness to the complex. The complex of Saecaroth also features multiple teleportation-traps that should serve to confuse and annoy PCs – both on the first and second level.

Interspersed through the complex are interesting hints about the epic, mythic battle that brought low this bastion of evil and residual magical energy, whether light-dimming or evoking phantom battles, serves to remind the PCs of the history of this ancient place. Among the special things that can be found in these halls, we get an artifact die and self-combusting zombies alongside hazards like rot grubs and green slime. Mysterious statues, strange displays of power, empty rooms, a fountain of acidic sludge etc. can be found in these halls – as can a particularly nasty trap – one room features an idyllic fresco that puts characters to sleep and then absorbs the sleepers into its fresco – devilish! Especially when coupled with one particularly deadly denizen of the level – these halls contain one room in which a minotaur lairs. A minotaur would be deadly at this level, but the issue is: This guy is immortal. He simply heals shortly after being slain. Thankfully, the module telegraphs this lethality early and if the PCs really must try their luck, then this is a great way to test their problem-solving/running away skills… After the 2 levels have been explored, the PCs may delve down to level 3 – if the second part of Saecaroth is released.

Editing and formatting are very good, though not perfect: I noticed a minor glitch here and there. Layout adheres to FGG’s two-column b/w-standard and the pdf features some nice b/w-artworks. The pdf is extensively bookmarked.

I have read this particular module back to back with “Castle Baldemar’s Dungeon”  and the difference in quality is vast – Saecaroth oozes deadly old-school flair, clever traps and most deadly opponents – without sacrificing storytelling via the details, items and peculiarities found in the complex. Yes, the story is not particularly new or exciting, but it doesn’t have to be – the dungeon is believable and logical, it has its own flair and its magic saturation evokes a sense of cataclysmic darkness that is simply fun to read and run. As mentioned, players should expect to die and on a marketing point, I’m slightly annoyed that this part of Saecaroth does not feature a “Part 1”, since its tantalizing hints have as per the writing of this module, not been fulfilled with a sequel.  That being said, this sojourn, also falls on the slightly short side of modules, not featuring that much content, when compared to similar offerings, but the content per se is enjoyable indeed. Since these levels so far lack the overall context of the Dread Saecaroth-story and due to its brevity, I’ll settle for a final verdict of 4 stars for this module.

Oh, and get this one while it still exists – at the moment of my writing this review, the module has vanished from OBS, Frog God Games’ HP and d20pfsrd.com’s shop, with only Paizo still featuring it. You can get it here on Paizo.