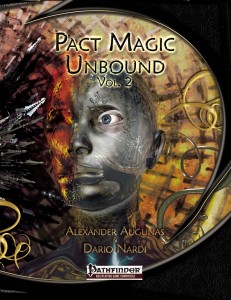 So, how do we start? Well, essentially with class options for all non-core classes – from exorcizing bombs to spirits in a bottle (i.e. poor pacts via mutagens), we get two damn cool discoveries for the alchemist as well as the occult chymist archetype – who gets diminished alchemy to pay for access to spirits. As a cool drawback, the alchemist develops an addiction to one chosen constellation, getting penalties when not bound with a spirit of said constellation – it should be noted that slowly, the penalties of this addiction can be overcome. Cavaliers may choose from two new orders – the order of the Occult Eye and the Order of Saelendrios – whereas the former would be dabbler in the occult, teh former are devoted to the eradication of pact magic, following in the footsteps of a particular order from Tome of Magic – only with vastly superior rules and proper benefits! Of course, Cavaliers also get a new archetype, the Pactsworn Knight – essentially a cavalier with binder capabilities – here the synergy between bound spirits and cavalier abilities is formidable, allowing the cavalier to e.g. challenge a foe and treat it as the favored enemy of his bound spirit(s). Occult Avengers are Gunslingers that live only for revenge – and thus use pact magic to hunt down their respective marks – while bound to spirits, their two exclusive deeds allow them to act as superb trackers of adversaries.

No other class is as predisposed fluff-wise to opposing pact magic as the inquisitor and hence the class gets a new anti-spirit inquisition. The occult abolisher is hence also a specialist of combat against pact magic – whereas the occult sadist pays for binding spirits and a painful touch (i.e. an antipaladin’s touch of corruption  -PLUS cruelty later!) with slightly diminished spellcasting, while the Pact Protector is just the opposite – a protector of spirits and occultists that has a glorious idea – instead of solo tactics, it allows for teamwork-feat synergy between practitioners of pact magic instead of the regular solo tactics! Glorious and elegant! The Magus may now opt for the Sibyl archetype – using essentially a pact magic’s equivalent of spell combat, these beings can also use arcane strike to replenish the expended abilities of spirits and later even quickly exchange spirits!

Of course, Occultists also get a new archetype, the Occult Scholar – these scholars get access to a revelation from the lore mystery, but also are barred permanently from one constellation, unlike the other archetypes, which more often than not choose a particular constellation alignment and prohibit the respective binding character from binding opposed spirits. We also are introduced to new binder secrets – for example one that allows you to redirect abilities that have been saved against to other eligible targets! Echoing abilities (for increased cool-down), affecting incorporeal creatures, a spirit alarm-system, particular efficiency against favored foes and even a way to heal oneself by temporarily suppressing spirits. The occultist also gets favored class options – including ones for all those ARG-races! Oracles of the Spirit Realm mystery can learn via a revelation to bend targets into greyish mockeries of themselves, cloak you and your allies from the unwitting eyes of mortals and whisper maddening, confusing whispers, reincarnate those perished by virtue of your connection to the spirit realm and even untether your very soul from your body! The Spirit Medium comes with a custom curse that represents the continuous onslaught of spirits, worrying away the medium’s will and subjecting them always to the influence of spirits. Have I mentioned that they may bind spirits (d’unhhhh) and also gets an actually functioning Ouija-board.

Summoners may now add minor granted abilities to their eidolons or have them steal minor abilities! Archetype-wise, summoners may now opt for the Spirit Caller – these beings essentially replace their eidolon with vestigial spirit companions that can easily be suppressed and further enhances said companions – damn cool! The Spirit Drudge Witch has the familiar exhibit/suppress the sign, making for a rather unique situation roleplaying-wise – depending on the constellation chosen, the archetype also gets a neat array of different bonus spells, but also prohibited constellations.

Chapter 2 kicks off with new uses for established skills and new feat: Ability-sharing via teamwork-feats, increasing binding DC for a higher effective level,  minor access to low level domain powers, occult spells modified with metamagic that automatically succeed at their concentration-checks for +2 levels, having a reserve spirit, partially ignoring DR of favored foes via the expenditure of grit,  more control on monstrous aspects – these feats are surprisingly, all killer, no filler!

Next up would be new spirits – 31 of them! Fans of the original “Secrets of Pact Magic” will rejoice here – for not only do we now get full legends for more of the respective spirits! Forash the mule-headed demon and e.g. Marat, who may have been either an intelligent construct with a story that is an interesting twist on the old Pinocchio/Gaining of sentience-trope, the first of the gearforged or a similar case would be two of the old favorites that have been updated here – much like the first Pact Magic Unleashed, the mechanics and their application to Pathfinder are vastly superior to the original D&D 3.X-iteration – Alexander Augunas is having a roll here. Even Milo of Clyde, the cynical detective, originally appeared in Villains of Pact Magic, makes a return here – and awesomely so: You may as an immediate action convert regular damage into non-lethal damage, but only if you’re not immune against the former: Awesome to survive uncommon threats and possibly even survive what otherwise would be a TPK! Other favorites like Lord Foxglove IV, the exchequer of the stole purse or Cornelius Button, the dual-minded gardener of dreams or the grisly tale of Ethaniel Midnight, the sadistic torturer that not even hell wanted to accept – all of these and many more can be found herein.

To my delight, the rather complex “spirit” of Circe’s 32 runes has also been upgraded – in a rather interesting way: instead o simply gaining access to some spells depending on the runes chosen (in addition to the other benefits), the spirit now makes a distinction between upper case and lower case runes and the spell-like abilities they grant, adding another dimension of tactics to the fray when choosing runes. As a minor fly in the ointment, I would have loved to see the visual depictions of the original runes in this book as well – but that’s just me being obsessive about runes and symbols, I guess. The Primordial Titans, Merickel, Hero of False Destiny – many of these have been updated, but it should be noted that unlike most updates from 3.X, these often come with new, revised and thoroughly changed/streamlined abilities, often not even being the same level as their original iterations – so yeah, even if you do own the original books, this one provides so much more than even a diy-conversion in line with PU 1 would offer – and that is what makes a great update, at least for me! Now originally, the spirit known as Overmind was rather broken – it is my utmost pleasure to report that the spirit’s power to jump forward through time is still there, though now balanced by a higher level! The tomb of the immortal god-king Septigenius Maximus is featured fully mapped – by the way, this one allows you to gain a gaze attack that can transform adversaries into salt, granite…and even gold!

Not all spirits herein are simply conversions, though – take Al’akra. Also known as the Tall Man. if you’re not shuddering at least slightly by now, go watch “marble Hornets” on youtube. I’ll be waiting.

Back? Yeah. Want paranoia-inducing powers, terror and spatial blending at your disposal? All possible! Damn cool! Speaking of which: Especially Midgard-aficionados should have a very wide grin upon reading of the option to bind FRIGGIN’ JÖRMUNGANDR as a level 7 spirit! Synchronizing wounds with foes, control water, raining poison from the skies – this is incredibly awesome and makes for a damn cool addition to the plethora of spirits available! Now what happens when Alexander Augunas’ preference for Kitsune meets with Lovecraftiana? Yith’ Anu, a trickster/body-snatcher kitsune/Great race of Yith-hybrid that not only allows you to emulate the mind-swapping gambits of said kitsune and erase the memories of others – instead of vestigial companions, you can get extra bodies into which to swap! What about making a pact in what is essentially Lamashtu in all but name, allowing you to summon deadly, powerful spirit-touched monsters and even heal yourself by drinking the blood of the freshly slain. As an adversary, the wolf-headed, extremely potent Worglord, first of the Hero constellation, is also tied in a rather interesting way to aforementioned mother of monsters.

Next up would be new spells – but first we are introduced to the new [occult]-descriptor as well as the aging-necromancy subschool as well as 3 new cleric subdomains – since this review already is rather lengthy, I’ll skim over these and just say: Awesome, cool – no complaints. Among the magical items, we get new qualities, exorcism bells – and thoroughly unique items like lenses that may store and copy information – or what about the orb of soul binding, which is a massive 100 pounds heavy!- oh, and we get gnostic tomes, which include the information to bind spirits – nice to offer them as treasure!

Chapter 5 is titled as esoterica and adds an “occult” background to… *drum-roll* the easy character background generator from ultimate Campaign! Hell yeah! Now that is not only useful, it’s awesome! Of course, we thus also require new traits, of which we get 16 and yes, we even get 4 new drawbacks to accompany these! Finally, we get Pact Magic’s spellblights, so-called pact maladies – essentially supernatural afflictions that can result from Pact Magic.

Editing and formatting are excellent, I didn’t notice significant glitches, only minor ones and few to boot. Layout adheres to a 2-column b/w-standard that is both elegant and nice to look at. The b/w-artworks are raw and convey well the unique feeling of pact magic and the respective spirits all come with depictions of their seals, which is something I consider thoroughly awesome – having players draw the seals themselves is a fun means of immersion, by the way. The pdf comes fully bookmarked for your convenience.

Pact Magic Unbound 2…is essentially Pact Magic’s APG – not only in support of the non-core-classes, but in the vast array of new options, the smart conversions, the quality of the new material – this is a completely non-optional expansion for the awesomeness that is Pact Magic – not only do the respective rules go beyond lame spell-like abilities and instead offer some truly unique things to do that no other class covers, it also irons out many of the glitches old spirits had in their former incarnation and simply adds so much more to the fray. While not all spirits have legends, we get more of them than in PU 1 and the tie-in with Ultimate Campaign’s char-generator is a blessing indeed. Mechanically more than solid and creative and expanding the lore of Pact Magic with thoroughly awesome new spirits and options, Pact Magic Unleashed Vol. 2 is a superb book in just about every way, with great production values and awesome content – If you’re looking to introduce Pact Magic into your game, get it along Pact Magic Vol. 1 – the two books combine to give you a much richer experience that allows you to make Pact Magic a vital, cool component in your gaming world – so bring a sense of the occult to the table and bind the friggin’ Tall Man/Slender Man/Operator! Final verdict? 5 stars + seal of approval + candidate for my top ten of 2014 since I didn’t get review done in 2013!

You can get this super Pact Magic-book here on OBS and here on d20pfsrd.com’s shop!