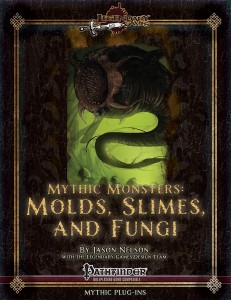 This installment of Legendary Games’ Mythic Monsters-series is 32 pages long, 1 page front cover, 2 pages editorial, 1 page ToC, 1 page SRD, 2 pages of introduction, 2 pages of advertisement and 1 page inside back cover, 1 page back cover, leaving us with 21 pages of raw content, so what do we exactly get here?

I like the gritty and dark. My campaigns tend to feature a lot of diseases, poisons and the like. Add to that the fact that I have some serious health issues with regards to fungus spores and a traumatic horror story I read as a child and I’ll come right out and say it: Demons? Lovecraftiana? Pfff. If you want me to feel uncomfortable, put me some fungi before me. I just consider them CREEPY and thus, I love using them. They also make players squeal – after all, who wants to be rotted from the inside-out?

As a nice idea, this pdf kicks off by introducing the optional fungus-subtype before providing…yes, 8 mythic fungus hazards. Though regular brown mold was bad? Wait until you fall into a patch of the mythic variant! Seriously, I love hazards and these add nastier variants to a DM’s arsenal – so kudos!

Now let’s look at the creatures, shall we? At CR 6/MR 2, the mythic ascomoid has not only better control via spore jets (and thus about their charging), it also is a neat fungal overrun machine. Cool! At the same CR/MR, the mythic basidirond not only gets poison blood and the option to entrap foes in ropy tendrils, they may also emit a sympathy-inducing aroma that can even fascinate those witnessing it from close-by. Creepy! At CR 12/MR 5, the Mythic Fungus Queen is a threat to fear indeed – not only can she energy drain, create difficult terrain (connected with her entrap ability!) and fight through her sporepods, she can also create legions of slain spawn. *shudder*

On the less high level/boss-battle style adversaries, we’d get the CR 3/MR 1 Mythic Leshy Fungus with soundburst (that one should probably be italicized) puffballs and yes, we also get full information for the ritual to create these.

Well, though the fungus queen was bad? CR 26/MR 10. MYTHIC MU SPORE. ‘Nuff said. Or not –  8 signature abilities versus two of the non-mythic version. One-page glorious full-color artwork. Shudder, tremble and fear, mortals. One glorious beast! At CR 5/MR 2, the mythic myceloid can go one step further and transform those infected by their purple pox into full-blown myceloids – oh, and they may actually taste your emotions, highjacking morale bonuses and ferret out you via emotions. CREEPY.  CR 4/MR 1 Mythic Phantom Fungus may spew forth dazzling spores. At CR 5/MR 2, the mythic phycomid can rapid fire their pellets and have them pop up in splash-damage-style bursts.

At CR 4/MR 1, mythic violet fungi get tentacles with barbs, okay, I guess. Finally, we get a lavish one-page illustration in full color of the Fairy Ring, a CR 8/ MR 3 new beast that is a plant swarm with various SLs that can act as a planar crossroads, disenchant magic items, act as a guarded rope trick-style pocket dimension, deals its swarm damage not only selectively, but also non-lethal and can even put you to sleep or pronounce ageing curses! Superb, iconic, awesome and a final capstone offering for the book!

Editing and formatting are generally, rather good – while there aren’t any significant glitches that detract from the  entries per se, it should be noted that basidirond, leshy, phantom fungus and violet fungus miss the ecology-entries of their statblocks. Not a catastrophe, but also a minor glitch. Layout adheres to Legendary Games’ two-column full-color standard and the two 1-page full color illustrations are glorious. The pdf comes bookmarked, but not to the respective entries and the bookmarks seem to be taken from the Demon-pdf, another minor gripe there. the pdf comes bookmarked with the good type of hyperlinks that is applied to rules/components where it makes sense.

Jason Nelson has crafted a thoroughly disturbing array of cool creatures (and hazards) here, with just about every critter filling very iconic roles and some monsters actually doing exceedingly cool things. That being said, this level of awesomeness is not continuous – the violet fungus, for example and the vegepygmies feel somewhat less inspired than the otherwise awesome creatures herein. Add to that the aforementioned glitches, and we arrive at a verdict where I can recommend this installment of mythic monsters at a heartfelt 4.5 stars, but will round down by a very small margin to 4 for the purpose of this platform.

You can get this nice bestiary here on OBS and here on d20pfsrd.com’s shop.

Oh another thing – Legendary Games is currently running an epic kickstarter for mythic books and you can actually determine, which of the creatures herein get into the final book! Here’s the link!