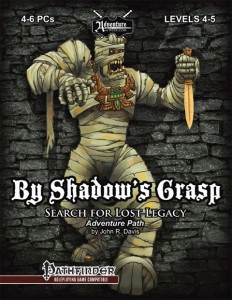 The third installment of the Search for Lost Legacy adventure arc clocks in at 54 pages, 1 page front cover, 1 page editorial/ToC, 1 page SRD, 1 page back cover, leaving us with 50 pages of content, so let’s take a look, shall we?

So, at the end of the module, the PCs began traversing an underground river towards the third level of the dungeon and thus, this module kicks off with an encounter of a duergar expedition force, including full stats for a vessel, the Ironkeel. Alas, nothing is doen with the vessel. No vehicular combat – a missed chance. Once victorious, the PCs will find evidence that bespeaks of duergar trying to loot the complex ahead – they are not alone here. While I get why this choice was made from a dramaturgical perspective, it does somewhat dilute, at least to me, what made I and II so captivating – the sense of dilapidation and abandonment that suffused the complex, a feeling of isolation and shattered dreams.

At the same time, though, the complex manages to retain its believability to a laudable extent – that s, one can still see the themes that rendered the series compelling so far being represented within these pages. What am I trying to say by this? While the focus herein pertains more crucial rooms of Vargon’s former complex, the respective rooms still feature an intriguing array of details of their former functionality. The defense-mechanisms and passwords that the PCs can unearth, as a whole, do provide a sense of realistic cohesion – the defense-mechanisms and checks provided makes surprising sense, even when referring to the unique fiendish minotaur herein.

The motifs of mephits and unobtrusive riddles still can be found within these pages, though one that refers to the initial letters of a rhyme imho requires more careful specification to be fair – as written, the players imho will have a very hard time guessing the intended solution. At the same time, this module does sport one “puzzle” that is downright awesome: There is a very strong xorn in here, who challenges PCs to a Tic-Tac-Toe variant, where the candidates put one hand on their head and then draw via the remaining hand(s) – i.e. one for PCs, two for the xorn, resulting in two xorn moves for any PC. And yes, this can allow the PCs to distract the guardian and plunder to their heart’s content – just make sure, the creature is occupied by its “fair winning streak”…

Beyond the remnants of Vargon’s forces, this level also constitutes a means for the PCs to meet their dangerous opposition – Tanrik and his henchmen have also infiltrated this level, providing additional opposition and, in Tanrik’s case, the prime antagonist and boss of this level -his background story and the legend of the perished emerald band are recounted among the appendices and again, we have nice full-color maps including player-friendly versions provided.

Editing and formatting are okay – both on a formal and rules-level, there are quite a few minor glitches that plague the writing and constitute a detrimental factor in the details. Layout adheres to a beautiful 2-column full-color standard with neat artworks and cartography. The pdf comes fully bookmarked for your convenience.

I have noted in the second installment a strange fluctuation in writing quality and ultimately, this very much extends to this installment, but in a rather significantly exacerbated form – when e.g. alchemical potions can create expeditious phase I have NO IDEA what that is supposed to mean. As much as I love the use of diaries etc. to foreshadow the things to come and fill in the blanks of the story, sentences à la “He states that he has attained just enough spell power now to bring the magical barrier.” [sic!] eject me straight from the level of immersion attained by the indirect story-telling. This does extend to magical item treasures, where a price modification could be in addition or as part of a piece of jewelry’s price – small glitches like this, while certainly not hampering the GM to the extent as to make this problematic, ultimately constitute my main issue with this installment in the arc.

This is by no means bad, mind you, and it inherits the logic and feeling of realistic exploration as well as the series’ proclivity for indirect storytelling. At the same time, John R. Davis’ writing is less refined herein, with quite a few small issues, more so than in the previous installments. It should also be noted, that, while this does refer to 3.X in a couple of instances, no rules for this system are provided – this is very much a PFRPG-only module, not one of AAW Games’ earlier dual-stat modules.

Over all, this installment proved to be less refined both as a reading experience and in actual gameplay – my experience did show that, while this can be the most challenging of modules in the series so far, it also runs slightly less smooth than part I and II. When I’m also taking aforementioned, partially content-influencing glitches into account, I can’t unfortunately settle on a final verdict higher than 3.5 stars, though I will round up by a teeny tiny margin for the purpose of this platform due to in dubio pro reo.