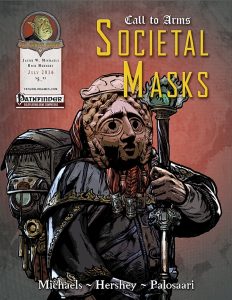 This installment of the Call to Arms-series clocks in at 34 pages, 1 page front cover, 1 page editorial, 1 page ToC, 1 page SRD, 1 page advertisement, leaving us with 29 pages of content, so let’s take a look!

After the obligatory and well-written introductory prose, we begin with a brief recap on the subject matter at hand – while masks in the beginning acted as primarily ceremonial tools, as our societies evolved, so did our use of them. We began, ultimately to employ these in a variety of ways – from art that evolved from ceremonial practices to the military and utility purposes in, for example, the context of medicine, masks have undergone a grand diversification process. The pdf recaps, among other things, the colombina, the comedia dell’ arte (and yep, I do own a plague-doctor mask!) and generally provides a great introduction to the matter at hand -cultural ramifications and all, the section is as well-written and inspiring as the best in the series.

It also doubles as a means to introduce and contextualize the mundane masks featured herein – these include, as always, a selection of masks from previously released books and new ones, collecting them all in one place for your convenience. Beyond the filter hood and the hoodwink cowl, new masks would be, for example, the expensive filter masks, a technological item with proper construction requirements, as well as protective masks, which help prevent critical hit confirmations at the cost of slightly impeding sight. The mundane masks presented here are mechanically relevant without being overbearing, making them nice examples of their respective item class.

As always with these books, we then go on to collate magical mask in a similar manner – this makes the section your one-stop shop destination for these and prevents bookswapping. For our convenience, the table listing them by price does make the distinction between minor, medium and major masks. The masks do also include several new pieces, which include, for example, burn masks – these allow kineticists convert a limited amount of burn per day, depending on the type, to damage that can be healed. Cool: When taken off before regenerating burn, it inflicts burn on the character, thus preventing cheesing! Kudos, even though the pricing feels a bit too lenient to me!

Hatemonger’s Hoods would be basically magical KKK-hoods, allowing for the preaching of hatred against creature types and making that mask predisposed for use by despicable villains. The luchador’s mask rewards using Acrobatics to move through opponent’s squares, while the class of samurai masks (6 of which can be found) features charges that can be expended for active benefits, while also rewarding holding the renewable charge with passive benefits. On a nitpicky side, the most potent of these allows for communication in magical silence, but does not clarify the interaction with verbal spellcasting -I assume it’s supposed to work in an unimpeded manner, but I am not 100% sure. Interesting – the oni-mask, for example, nets a surge-like dodge bonus of 1d6 to AC versus a single attack as an immediate action. I can see that being really rewarding! Similarly, I like an inexpensive mask that enhances Reflex saves versus splash weapons and the sycophant’s bridle prevents you from saying anything negative and makes lying actually painful. That represents an intriguing item to contemplate – in a world where such an item exists, how would it be used? I am pretty positive you can find your own answers to that.

The pdf also contains 2 cursed masks – the first of which overrides the identity of the wearer with that of the person depicted, while the second fakes healing of magical diseases…only to re-afflict the wearer, which sports ample adventuring potential! That being said, the latter has an italicization missing. There is also an intelligent social mask – the roleplayer’s adornment, which nets the wearer access to medium spirit powers – alas, with the potency determined by the Perform (act) skill check results – which may not be the wisest scaling mechanism, considering the easy means to buff skills. Adding a minimum level for the more powerful aspects would have made sense to me.

The mythic masks of this installment would be the conspirator’s visage is basically the Guy Fawkes/V-mask that enhances alchemical explosions (NICE!!), while the forgettable face duplicates the immediate change social talent, but also modifies the memory of those witnessing the change, with only those familiar with both identities receiving a save to resist the scrambling. Mythic power can enhance the DC by the surge die. The pdf also features two artifacts – the crusader’s cowl is basically a Batman-mask that can generate darkness and make the wearer more imposing, while also granting blindsight. The secret commander’s mask is a combo helm of telepathy and amulet of proof against detection and location, while also enhancing the wearer’s ability to see through lies and deception.

The pdf also presents a new gunslinger archetype, the outlaw, who may expend grit to create a short-lived dual identity for 1/2 class level +1 per Wisdom modifier minutes, replacing gunslinger’s dodge thus. Instead of gun training 1 – 4, they gain a gun-based 30 ft.-range sneak attack-like bonus damage, which increases every 4 levels after 5th. 7th level doubles this range (replacing targeting) and 11th level allows for the expenditure of grit when using such a shot while masked to stun the target temporarily. Decent one, though I wished it had more things tied to the mask – as written, the archetype feels a bit disjointed. The pdf provides PFU-style variant multiclassing for the vigilante.

Then, things become interesting: Masked Intrigue would be the name of the game; seeding audiences and the use of masks in the context, masked individual influence and the ramifications on social combat are discussed here….and next up would be something between a set-piece encounter and full-blown module, with a masquerade intended for level 5 characters: A total of no less than 7 characters are provided with masks, true identities, appearance, introduction, biases, personalities, relevant skills and saves and entries regarding analyze and weakness. Obviously, influence, events associated and benefits are similarly covered for the individuals. While I won’t run the masquerade as written (it’s free-form anyways), this very much represents a nice scavenging ground for similar events n one’s game, rendering this a useful chapter indeed.

Editing and formatting are good, bordering on very good; while I noticed very minor hiccups like missed italicizations and the like, as a whole, the book is well-crafted. Layout adheres to Fat Goblin Games’ two-column full-color standard and the artworks provided are nice and complement the theme. The pdf comes with basic bookmarks for our convenience, but not individual bookmarks, so if you’re looking for something particular, you may need to search a bit.

Jacob W. Michaels’ second CtA-book pertaining masks is significantly better than his first. The masks are generally more interesting, their rules are more refined and the new content often employs interesting, fun rules-operations. The masks themselves are simply more interesting and the intrigue/mask-sequence is neat indeed. Similarly, I loved the sample personalities for the massive scavenging potential. That being said, there are a couple of minor hiccups here and there, and I frankly believe that the masquerade-intrigue concept could have carried more. The archetype feels a bit lackluster and like it could have used a tighter connection of gunslinging and dual identity. As a whole, this is not a bad book, but it doesn’t manage to reach the loftiest heights of some of the installments in the series. In the end, my final verdict will clock in at 4.5 stars, rounded down to 4 for the purpose of this platform.

You can get this equipment book here on OBS!
Endzeitgeist out.