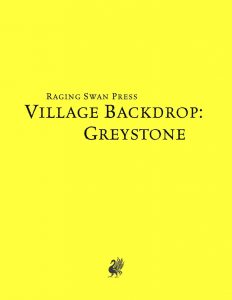 Astute readers may notice that the system-neutral iteration of this village clocks in at 1 page less than PFRPG’s version – well, the whole page depicting the degenerate creature template and the brief write up of Dagon as a deity is missing here, which is a big drawback, as both contained flavorful descriptions that most certainly would have been appreciated herein as well.

Creighton Broadhurst, master of Raging Swan Press, is an absolute master at depicting desolate places, decrepitude and a general sense of a world that has moved on, to paraphrase the classic King-sentiment. Indeed, even among the offerings he has penned, this stands out. That being said, while I absolutely adore the prose herein, the pdf falls behind by cutting not only the rules of the deformities and Dagon, but also the flavor, making this system-neutral, yes, but also stripping away some nice dressing that most certainly wouldn’t have been out of place once stripped of the crunch. As much as I adore the vivid prose herein, losing a whole page in comparison to PFRPG makes this a weaker version of the village, one that lacks one pretty flavorful component. Hence, my final verdict will clock in at 4 stars for this one: The prose is still excellent, but unless you REALLY hate any semblance of rules in your game, get the PFRPG-version instead. You can still ignore the rules-components of the degenerate tables etc., but you’ll have more content as a whole.

You can get this version here on OBS!