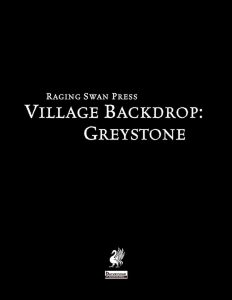 This installment of RSP’s Village Backdrop-series is 12 pages long, 1 page front cover, 2 pages of advertisement, 1 page editorial/ToC, 1 page SRD and 1 page back cover, leaving us with 6 pages of content, so let’s take a look at the settlement!

Astute fans of the series will notice that no settlement statblock in the traditional sense is included here as a concession (probably) to the transition to multi-system support the series has undergone, though frankly, I am missing it. That being said, the settlement does come with the traditional notes of villager nomenclature and dressing as well as local lore…which does make for an amazing warning, as the houses are supposed to contain tunnels, shielded from the light of day, tunnels that allow the degenerate inhabitants to move from place to place unseen by the light of days. Some murmur about the massacre that once took place here, when the strange antediluvian structures were found beneath the manor that belonged to none other than dread Dagon, who gets a basic deity write-up here.

I already mentioned the deformities, which are represented by a 12-entry strong table accompanying a template. The template also sports 12 cosmetic deformities (erroneously headed by a d20 instead of a d12 in a cosmetic hiccup). Beyond Tommi Salama’s superb cartography of the village, the pdf comes with a second gorgeous map drawn by the Finnish master of cartography, which depicts the labyrinthine caves below the hills, allowing for easy two-step functionality here. In short: This is basically a great set-up for a truly creepy village, with the closest analogue I can think of being a blending of the village in Darkest Dungeon and a backwoods horror movie flick à la Texas Chainsaw Massacre.

Creighton Broadhurst, master of Raging Swan Press, is an absolute master at depicting desolate places, decrepitude and a general sense of a world that has moved on, to paraphrase the classic King-sentiment. Indeed, even among the offerings he has penned, this stands out. Seen from a neutral point of view, I should not be half as impressed by this as I am – from a rules-perspective, the template didn’t blow me away and the lack of a statblock for the village is a minor detriment…though frankly, here it is less relevant.

Why? Because this is, in short, an adventure in disguise: Throw the PCs in and have fun. Haven’t prepared anything? Whoop out this pdf, read it (5 minutes, tops), make a few notes…and bingo, you’ll have an adventure on your hand. Just watch the PCs interact with what they find. The atmosphere is amazing and in my mind, I can almost hear the voice of Darkest Dungeon’s ancestor say “Ruin has come to our noble village…” In short: This is an installment that lives by virtue of its phenomenal prose. In fact, were it not for these minor complaints, I’d consider this on par with the very best of all offerings in the series, as the atmosphere evoked is perhaps only rivaled by the brilliant Kennutcat. Still, there are a couple of uncharacteristic minor hiccups herein and, while the prose is pure amazing, the crunch supplementing it feels slightly less inspired. Hence, I will rate this at 5 stars, with an explicit recommendation for anyone looking for a truly atmospheric settlement.

You can get this, the best version of the village, here on OBS!