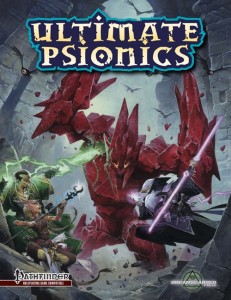 All right, to properly preface this – I’ve been using psionics for about 80% of my DMing career – from 2nd edition to the rather poor 3.0 version (and its kind-of-fixes by Malhavoc Press) to the great 3.5-version…and this is when I found Dreamscarred Press. I liked what I saw there and got just about everything. Fast forward to pathfinder and Psionics Unleashed. It might sound weird, but without this book, my campaigns would simply have missed a central ingredient, like a dish missing salt. It was then I supported the diverse subscriptions offered and got Psionics Expanded – and at first ripped some of the content a new one. The resulting book, though, remains one of my favorite rulebooks ever, on par with the APG. So yes, I was very excited about this book, but alas, the KS came at a bad time for me and thus I don’t (yet!) have the hardcover in my hands.

Now there have been quite some errata over the years and getting essentially the “final” up to date version, with new artwork etc. is great. In case you didn’t know – this book doesn’t stop by collecting the information from Psionics Unleashed and Expanded – it also contains new material galore, which was also made available to customers of the former books in a very fairly priced expansion called Psionics Augmented Vol. I. All of these books have one thing in common beyond their themes, content etc.- I’ve already reviewed them – in excruciating detail. Were I to go into this level of detail here, the review would probably clock in at well over 30 pages and let’s not kid ourselves – no one would read that. I’m already surprised that some people read my lengthy ramblings.

So what I’m going to do instead is give you a brief synopsis of what to expect – 10 psionic races, including old favorites like the blue goblins and new ones like the half-construct forgeborn – all of which come with age, height & weight, attitudes to other races, favored class options and yes, alternate racial traits. Furthermore, each race gets an array of exclusive racial archetypes, often making use of the unique talents of the respective race.

10 psionic 20-level base classes, all of which are superior to any prior incarnation – the soulknife no longer sucks, to just give you ONE example. The classes are also very customizable and some of them rank among my favorite classes for PFRPG – PERIOD.

Basic concepts like the psionic focus, psionic displays etc. – all explained very concisely and thoroughly, with the latter even coming with an extensive, comprehensive list of sample visual, auditory, mental, material and even olfactory displays are provided – as is essentially a beginner DM’s guide to how psionics work and how to introduce them to your campaign, including a sample reskin should you not enjoy the flavor of psionics. Skills are also covered, as are feats – how many? The table alone spans 6 (!!!) pages! And yes, having all of them in one chapter instead of three books is a major comfort-plus. The same holds btw. true for the powers. How many do we get? An insane amount. No, really. No less than 100 pages of the book are devoted to powers. now take into account that unlike spells, psionic powers can be augmented, thus requiring less variants of one spell concept than spells and you’ll get an inkling of how many options are herein. Have I mentioned all the legendary items (not the mythic ones) – powerful magic items that increase in power over the levels, all with unique artworks and stories to discover? (Yeah, I’ve reviewed all of them as well…)

There also are no less than 19 Prestige Classes to be found herein and no less than 56 pages of magic items…oh, and beyond that, we also get a glossary that explains terms…and one fact I enjoy tremendously – the book offers astral construct stats and similar player-relevant monsters, but unlike the previous iterations, psionic monsters will be released in a separate bestiary, making this book fully and completely player compatible. Two thumbs up for that!

Editing and formatting of this massive tome are of a surprising quality – excellent and top-notch by any realistic definition. Glitches indeed are thoroughly minimized to the point of being almost non-existent. Layout adheres to a drop-dead gorgeous full-color two-column standard and the pdf comes with a vast array of mind-blowing, awesome, beautiful artworks – and a Wayne Reynolds cover. Can’t get much better than that in the art-department! The pdf is lavishly detailed in its bookmarks, making navigation simple – as is required by such a massive tome.

Sooo…what we have here is interesting: It’s a bit like reviewing the CORE-rules or the APG: We’re talking about what essentially is a completely non-optional book in my opinion.

Every campaign that shirks psionics not for flavor, but for by now completely inaccurate accusations of balance-issues is missing out on one of the most rewarding expansions for Pathfinder.

While this is not my personal opinion ( I enjoy both for what they do), I do feel obliged to point out that my players consider unanimously psionics to be the superior system when compared to vancian spellcasting (even though at least one of them dislikes the flavor) and in multiple years of using Dreamscarred Press’ psionics have we not once encountered any crucial difficulties. Now this book collects all these nifty bits and pieces from 3 massive tomes in one book that is greater than the sum of its parts by sheer utility, by scope…and superb production values.

While I don’t enjoy EVERY component part (see my individual reviews for that), the vast majority of the content should be considered simply stellar – awesome and a book that will enrich just about every game it is introduced to. Were I to complain about one thing, then that would be that the book has no index, at least in the pdf version on which this review is based since I don’t yet have the hardcover.

So let me make that abundantly clear: If you have the component books, this is useful. If you don’t have any of them, then this ranks among the best possible purchases you can make to expand your game and I stand by that. For me, this content of this book, whether as the  component books or the superb Ultimate Psionics, is non-optional. It is as much part of the game as vancian spellcasting, as much part of my concept of Pathfinder’s identity as a distinct system as the APG. Psionics Expanded, one of the component books, made it on my Top Ten-list of that year  -and this is THE ONLY reason this book is not a candidate (and let’s face it – high ranker or even winner) of 2013’s list. Rare is the book that so wholly transforms the game, feels so concise and well-presented, offers so much and in this quality – rare indeed is such a monumental grimoire of crunch and much like Paizo’s APG, this book does infinitely more to establish the identity of a distinct, diverse fantasy full of options than just about all crunch-books I’ve read. If you have so far shied away from psionics-  here’s your chance: Take it! If you have the component books, wager utility (all in one book) versus price point. If I may: The book is beautiful; personally, I’d go for the slightly more expensive full color version – the artwork’s worth it. Final verdict? Unsurprising 5 stars + seal of approval.

You can (and should) get this massive tome of awesome psionic goodness here on OBS and here on d20pfsrd.com’s shop!