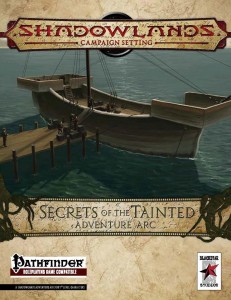 This module is 32 pages long, 1 page front cover,1 page SRD, 2 pages editorial, 1 page ToC, 3 blank pages, 2 pages of advertisement, 1 page back cover, leaving us with 21 pages of content, so let’s take a look, shall we?

All right, still here? So what are the “tainted”? Essentially, the Tainted are the downtrodden of the big cities, those rejected that live underground, ins ewers, at the fringes of society. As a group they may select one of the 6 exclusive traits herein – all of which deliver what one would expect, i.e. minor bonuses/class skills or circumstantial bonuses when underground/fighting in cramped quarters. We also are introduced to 3 short fluff-only write-ups of different tainted groups and a short piece of fiction about the Tainted.

This being the beginning of the adventure-section of the review, the following contains SPOILERS. Potential players should jump to the end of the SPOILER-section.

Still here? Well, the Black Hand has managed to steal a particular wand from the Brotherhood of Magus – and the PCs are contacted by one Jervo in the employ of Sergius Paco, to obtain the wand. The thieves broke into his store via the underground and the PCs have to venture down there. In the darkness, the PCs may track the thieves and find the remains of dark creepers etc. and also fight some thugs from the Viper-gang. They will also have a chance of saving a ratfolk merchant from his catfolk stalkers and thus find their way to the only glanced over, intriguing Baubletown, which remains dreadfully opaque. Travelling through skulk-territory (again, remaining rather opaque), the PCs arrive just in time to board the Blue Barnacle, defeat the sailors and retrieve the semi-burnt-out artifact. It should be noted that both the ship and the docks are lavishly mapped by cartography-legend Jonathan Roberts, though some may know these maps from the Fantastic Maps-series. As a help for DMs, this final encounter is given a 5-round round-by-round breakdown.

The module comes with suggested random encounters for the underground as well as 25 1-line random events to make the underground come to life.  We also get the alternate urban ranger class: d10, 6+Int skills, 4 levels of spellcasting, good ref-and fort-saves. The alternate ranger gets a stray companion, urban fighting prowess in crowded areas etc. We also get 4 sample weapons.

Editing and formatting are top-notch, I didn’t notice any glitches. Layout adheres to a beautiful 2-column standard in full color with unnecessary blank pages, but also with gorgeous artworks (though you may know some of these from other Shadowlands-books) and superb cartography. The pdf comes fully bookmarked.

Author John Maki offers an eclectic mix somewhere between sourcebook and adventure here and generally, the idea of the “Tainted” is a nice one, but unfortunately, the adventure fails in every conceivable way – it is rather generic, not particularly steeped in Shadowlands-lore, less detailed than your average Season 0 Pathfinder Society Scenario, uses a tired angle, offers intriguing ideas only to railroad the PCs away from them etc. – there are so many nice locales in here, but NONE of them are driven by interaction with the players. They do something and then watch the cut-scene – apart from the combat, this is the FMV-school of adventure-design: Press a button/roll a dice and watch. Not many options here, no alternate ways of handling things – nothing. Neither the trek through the underworld, nor Baubletown get sufficient levels of details (or options to interact with them!) and the combats are at the very best uninspired.

The module hints at abstract, intriguing vistas without fleshing them out, though these would have been the only way to salvage the excessively clichéd story-line. Add to that the simply unnecessary, bland alternate class that lacks ANY reason to exist (having NO exclusive tools to speak of – it’s essentially a cosmetic reskin sold as an alternate class) and the boring weapons and we have a supplement/module that may have top-notch production-values, but apart from that, NOTHING going for it. And I’d settle for a final verdict of 2 stars – were it not for the grossly inflated price that puts the artwork/cartography into perspective and makes this look more like a cash-grab than anything else – a short piece of fiction/supplement, blown up with a generic adventure if there ever was one, supplemented by a boring class-reskin and some weapons? For 8 bucks? You can buy two of 4 Dollar Dungeons SUPERB modules (like Panataxia or Horn of Geryon) for that price, each of which will entertain you infinitely better (and much, much longer) than this exceedingly short snore-fest. Final verdict? 1 star.

If you’re a Shadowlands completist, you can get this pdf here on OBS.