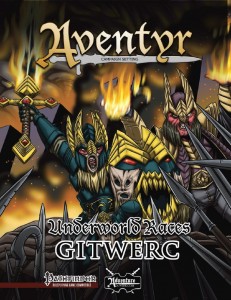 As with the other installments of the Underworld races-series, this one kicks off with a massive mythology of the subterranean races, a collective origin history that can be potentially transplanted from Aventyr into other settings, should one choose to do so. From there on, the gitwerc are described – amidst the numerous dwarven races forged from the ancestry of the dvergr, the gitwerc could be called those most out of line with conventional dwarvenkind in other campaign settings – not even the mad derro feel like fitting analogues, mainly due to a completely different focus. What d I mean by that?

Well, they went into the earth’s molten depths and erected an empire, but Aventyr isn’t like other worlds – in the bowels of the earth, the devils are bound and the gitwerc have entered infernal pacts with the forces of HEL, rising to become emperors among emperors, realizing the coming of the Dracoprime before its impact was felt – the gitwerc are feared and notorious indeed – and their history is far more expansive and interesting than that of their other dwarven brethren, adding more to the overall race’s mythology. With distinct, disturbing eye and flesh-colors, a penchant for body modifications and unique racial traits, they also stand out in that department:

Gitwerc receive +2 Con, Cha and Int, -4 Dex and Wis, are slow and steady, receive 60 ft darkvision, are native outsiders that still need to eat, breathe etc., receive cold, electricity and fire resistance 5, +1 natural armor, always treat diplomacy and sense motive as class skills and sorcerors of the abyssal/infernal bloodlines treat their caster level as +1 for the purpose of bonus spells or bloodline powers. Additionally, they can see perfectly even in magical darkness and suffer from light blindness…oh, and they receive an alter self-like effect to pass as a dweorg as a supernatural ability. Yeah. And know what – while stronger than the core races, they are in line with aasimar and tieflings, so exactly 0 complaints on my end!

Speaking of 0 complaints – this extends to the copious favored class options the Gitwerc receive. A total of 6 racial feats allow Gitwerc to add oomph to their infernal flair – whether it’s being a devilishly sly negotiator, receiving a kind of natural armor spikes that damage those foolish enough to grapple you (upgradeable to a nasty carapace), making consumed alcohol flame-breathe or assuming the look of creatures whose skin you’ve worn…wait. What? Yes, Gitwerc enjoy wearing flayed skins, which are one of the new items. The other being the dread HEL bottles (think deadlier alchemist’s fie that is essentially a micro-lava-splash-weapon…and blood candles, which can be made via a new spell (and easier made via a feat) – these allow the victim’s souls to be ripped from their bodies and subsequently being siphoned to HEL. Even before the HEL contracts, this makes the Gitwerc capital “N”-level nasty. The other two new spells beyond the fashioning of blood candles allow you to counter grapplers as a swift action with impaling horns or conjuring forth spectral, flaying blades- ouch!

Julian Neale and Mike Myler’s Gitwerc are awesome – hardcore lawful kings of the Underworld, they resound with myths of the more nasty of dwarvenkind like Alberich, combining this with cool infernal tyrant and tieflingdom tropes, crafting a small window into a race’s culture that is greater than the sum of its parts and which still has its own identity – more fluff, concisely presented, unique items and a thoroughly disturbing array of items and we have a race that is distinct, appealing, and won’t be confused for anything else – unless the Gitwerc want to. This is by far the best of AAW Games’ dwarven races, with no issues to speak of and storytelling potential galore. My final verdict will clock in at 5 stars + seal of approval.

You can get this cool, nasty race of evil dwarves here on OBS!