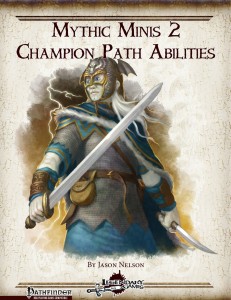 We kick these new abilities for the champion path off with 3 new 1st tier abilities:

-Analytical Eye: When a creature has attacked you, spend one use of mythic power as an immediate action to learn about int-mod combat feats your foes may have. That’s…exceedingly boring and feels rather un- mythic, not starting with the metagamey aspects of the mechanics.

-Combat Feat Mastery: Spend one use of mythic power, practice for one hours, get access to one combat feat for 24 hours. At 4th tier, instead get 1/2 mythic tier combat feats. At 6th tier, spend two uses for a training duration of only 1 minute per feat. This ability is insane, even for mythic power-levels – this essentially is not only a wildcard feat – it’s potentially a wildcard feat-CHAIN. Not gonna happen in my game, even when going Mythic.

-Smashmouth: 1 use of mythic power to accompany your bludgeoning damage allows you to penalize bite-attacks and verbal spellcasting. Very specific – why not make this work for all types of natural attacks, potentially with arms correlating to miss-chances for somatic components? This ability has potential, but should have more benefits/options.

We also get 5 3rd tier abilities:

-Mythic Rider: Use mythic power to prevent being dismounted or having your mount fall prone. Alternatively, grant your mount hard to kill, recuperation and mythic saves for 24 hours. Solid for mounted characters.

-Reaping the Chaff: Make one full BAB-attack as a full-round action. If you hit and against foes with HD less than your mythic tier, you may follow up the attack with a movement to the next adversary and repeat the process until you miss or attack a foe with HD > your mythic tier. This movement does not provoke AoOs from foes with less HD than your mythic tier and you may move up to twice your movement rate. I had a similar ability in my home game once – it puts the game to a grinding halt. Attack upon attack, damage upon damage. It’s just boring for the other players. Not a fan of this ability. It looks nice on paper, but in game…

-Trick rider: Gain one bonus feat from a mount-related short list for every 2 mythic tiers you have. Boring, but not without merit.

-Two Can Play at that Game: When learning of combat feats via analytical eye, you can spend one use of mythic power to be able to choose 1/2 mythic tier feats thus determined and gain access to them for 24 hours. Essentially a more limited additional way of getting feats – less OP that Combat Feat Mastery, but the requirement of a waste of a mythic path ability with analyzing eye mean I wouldn’t choose that one either.

The duplicated cover artwork eats about 1/3 of the space available for the content, which is something you should be aware of. Jason Nelson is a great designer…but I don’t know what has happened here. I’m seriously stumped. Combat Feat Mastery is very powerful even by Mythic Adventures standards – to the point where many will yell “broken”. Mythic Rider and Mariner are solid abilities, but all the others herein either are very specific, fall short of their potential or are downright lame. I would only take most of these under very specific circumstances and generally, was thoroughly disappointed by them. While not per se bad, many of the options herein feel bland – the mythic path equivalents of taking a skill-bonus increasing feat. With a bit more space and versatility, the Smashmouth ability could have been made awesome and more useful by expanding its focus. Honestly…I thought long and hard…and my final verdict will clock in at 2.5 stars, rounded down to 2. Why? Because I can only see my table ever using at best 1/4 of the content herein – the rest is simply off on one end or the other of the balance scale or simply not that interesting. Even Legendary Games seems to get it wrong once in a while.

You can get this small mythic pdf here on OBS and here on d20pfsrd.com’s shop!