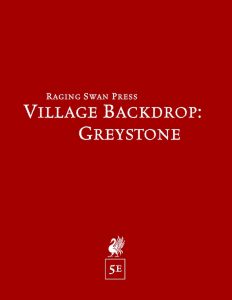 Astute readers may notice that the 5e iteration of this village clocks in at 1 page less than PFRPG’s version – well, the whole page depicting the degenerate creature template and the brief write up of Dagon as a deity is missing here, which is a big drawback and pretty unexplainable to me. It’s not like 5e doesn’t know special features for NPCs galore or similar modifications. I can come up with no viable reason why there is no 5e-version of the unique mutations and degeneracy of the locals…and why the cosmetic changes have fallen to the chopping block as well. A couple of unique features for the local folks would have certainly been easy to include.

Strange carvings, mostly rendered unintelligible, weirdly mixed architectural styles and two tables to depict minor details for the caverns or add in small events can be found here as well, though the die to roll is d12, not d% as noted here. These cosmetic glitches, however, should not be taken as an indicator that this pdf contains anything but the most impressive of prose, which generates an atmosphere so thick you can almost cut it. Much like in PFRPG’s version, these dressings and minor events remain system neutral and do not have mechanical repercussions.

Creighton Broadhurst, master of Raging Swan Press, is an absolute master at depicting desolate places, decrepitude and a general sense of a world that has moved on, to paraphrase the classic King-sentiment. Indeed, even among the offerings he has penned, this stands out. That being said, while I absolutely adore the prose herein, the pdf falls behind by cutting not only the rules of the deformities and Dagon, but also the flavor these brought. This was jarring in the system-neutral iteration. In the 5e-version, I am even more baffled by the decision. This makes the pdf excel in prose…but also means that it can’t mechanically back up the promise of the amazing prose.

I am really torn regarding the final verdict of this version. The prose does not deserve being rated down to 3, but at the same time, the lack of unique mechanical tricks when they would have been so easy to integrate is jarring to me. Ultimately, in spite of my policy of in dubio pro reo and the strength of the prose, I feel I need to round down from my final verdict of 3.5 stars. If you have the luxury of choice and feel that you can handle the basic conversion, I’d instead get the PFRPG-version and do the conversion of the minimal crunch herein – the lore DCs have, e.g. not been modified, which makes the 5e-relevant material mostly pertain the abbreviated statblock-references in the important NPCs-line. If you do not care about the mechanical components, consider this a 5 star-offering instead.

You can get this flavorful village here on OBS.