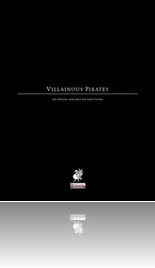 This pdf from Raging Swan Pressis 49 pages long, 1 page front cover, 3 pages editorial, 1 page ToC/foreword, 1 page how-to-read statblocks for novice DMs, 1 page SRD, 2 pages biographical information on the designers and 1 page on how to use them and 1 page back cover, leaving a total of 38 pages of content, so let’s check this out!

Funny how synergies tend to go – here’s a pirate-themed AP and there we are: A solid selection of pirate-themed NPC-villains with the good ol’ Raging Swan-treatment. The pirates range from a CR of 3 to 13 and the pdf kicks off with a table that has them ordered by CR.

The pirates herein are not entirely conventional and you’ll soon see why: The very first pirate is actually a cassian angel bard, and we have halfling fighter/duelists, a xill expert/surgeon , half-orcish savage skalds, a samurai ronin, a brownie witch, a siren oracle, a SANDMAN (!!!!) transmuter, literally all of the NPCs herein have something going for them but if you’re in doubt, the NPCs also use neat5 class options: Take for example Oga Ogati, a barbarian (invulnerable rager)4/oracle (waves) 4 or take Old Benaz, the poltergeist sea singer bard 2 to a rare 4-armed miniature girallion and even a cloaker fighter, a kapoacinth rogue, an ettercap barbarian and even a grindylow monk, we get a stellar array of awesome characters, all with mannerisms, distinguishing features etc. to make them come easier to life. And if you’re thinking these characters might be too far out, rest assured that e.g. classics like a fully stated multiclassed tiefling assassin are also part of the deal – at least for me, though, the stranger pirates are the imaginative winners here. This chapter closes, as does the second, with a list of the pirates by alignment (CE to LN, btw.).

The second chapter deals with so-called pirates of renown: While the first chapter provided cool characters and solid stats to use, including short paragraphs and NPC-information, the expert fluff-writers of RSP go all out for the second chapter, providing at least one page of space for each character – take e.g. the devious quasit sorceror Cyllav Bellcroaker to Magus Banneus Pollar, who is afraid of his familiar – with reason and a lot of cool development potential for enterprising GMs. Have I mentioned the red-skinned mercane-slaver Insaelt, who is hunted by a zelekhut, making for a truly interesting and strange hook? Or take the driven Jessa Wavechaser, searching for her brother and sworn to the powers of the sea. Kalazabuil is one of my favorites: The giant advanced barghest captain of the Bleeding Edge comes with his very own poem called “Six Feasts of Kalazabuil”, which might make for a neat idea for a whole campaign or a dread prophecy the PCs should have to defeat. Rexal Urexin, the minotaur-captain is also notable for his three bullet-points style special crew-members mentioned and fans of freeport should rejoice that a serpentfolk magus has also found its way into the pdf alongside Vessa, the lizardfolk shaman queen. And then there’s Verdan Calanphon, the elemental kin treant barbarian-pirate who scours the sea to prevent artificial volcano-eruptions and defeat fire-giants and similar threats to forests. Oh, and he has the leader of the fire-giant’s hand grafted to one of his charred limbs as a gruesome source of barbaric strength. See the details? See the iconicity? This pdf is full of such. The pdf closes with pirates of renown by alignment.

Editing and formatting are, as I’ve come to expect from Raging Swan, top notch, I didn’t notice any glitches. Layout adheres to RSP’s printer-friendly 2-column standard and the pdf comes in two versions, one optimized for screen-use and one for printing, but no section of RSP-statblocks for the statblock library. It seems like RSP has abandoned that idea, which is a bit of a pity. The artworks are b/w and mostly nice and fitting, though I’ve seen some before. The pdf come with a plethora of nested bookmarks. See that complain about the missing RSP-statblock library file? Somehow it’s sad – that’s seriously the only gripe I could muster. After the stellar “Scions Of Evil” I honestly didn’t expect the pdf to live up to that standard. RSP listens, RSP improves. Villainous Pirates is a stellar selection of cool NPCs, that, while not an apex of complexity in their builds, shows that the respective characters are inter4esting, make for awesome weird crew-mates, enrich the settings into which they are introduced and may even spark off a campaign of their own. Were all NPC-books like this, I wouldn’t have to write reviews at all. Final verdict? 5 stars, endzeitgeist seal of approval and congratulations to John Bennett, Andrew Glenn and David Posener for delivering an excellent resource that sets the bar very high indeed.

Villainous Pirates is available from: