NeoExodus Adventures: Undying Legacy of the First Ones 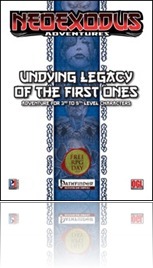 This module from LPJ Designis 18 pages long, 1 page front cover, 1 page editorial/SRD/thank to donors, 1 page advertisement and 1 page back cover, leaving a total of 14 pages of content, so let#s check this out!

All right, Still here? Ok! The village Pushkar (complete with settlement modifiers, btw.) originally founded by the Dominion and now nestled in the Caneus Empire, near the town of Hassani. Wait, you say. Dominion? Yes, the adventure gives you a short rundown of some elements featured in this module that are peculiar to NeoExodus campaign setting. While I’m familiar with the setting and could point you towards all the reviews I did for it, I’ll instead try to elaborate on some basics.

The Pcs are hired by Father Issek, a devotee of the Sanguine Covenant (think hard-core medieval Catholicism meets Bloodmagic and worship of saints that are powered by a kind of sanguine anima universalis), the dominant religion of NeoExodus, hires the PCs to travel to aforementioned town of Pushkar and push back a tribe of Calibans that is besieging the town. Like the famous literary figure, these beings are savage – unlike him, though, the Calibans of NeoExodus, albinism-white cannibalistic humanoids that sustain on a diet of their consumed foes are fearsome foes and can draw strength from their victims. There’s a cheap Monsters of NeoExodus-pdf detailing further their tactics and feats, but all information you’d need for this module is contained herein. After vanquishing a first group of raiders with the help of the father, the PCs arrive in town.

The town has problems, that is readily apparent – the Pcs are not greeted as saviors, but with suspicion and even the aiding of the old leader doesn’t seem to help at first – the reason becoming quite clear once the crowd assembles : The attacks have stopped with the departure of the good father. Hopefully the PCs can calm down the mob. Investigating the local town as well as the burned outlying farms yields scarce clues, but enables the PCs to track the calibans back to their camp… where none of the cannibals can be found. The Pcs can, from there, track the creatures to ruins, where they will find a shaft leading to a once sealed temple – worse, the carcass of a dog contains bone-shards, which point towards the Scythians (Bone-spurred humanoids, savage killers that spawn from shards and were bred as a warrior race), dread servitors to the First Ones (collective term for the ancient races of evil that once held sway over all of NeoExodus). In order to get inside the dungeon, though, the PCs will have to solve a handout-enhanced minor puzzle that should stupefy none.

In the dungeon (which comes with a functional map, but no player-friendly version of the map – not that bad, though, since the cartography is not exactly appealing), the Pcs will be sorely tested by Kyaaa’Gwa, an undead skeletal Scythian Champion who has reaped the calibans and anyone else he could get his bone-studded claws on via the magical “Bed of Galowyeet”, a dread magical object that can reanimate its victims. Once they have vanquished the foe (who gets a STUNNING full-color artwork), they still have to decide how to deal with the one survivor, a caliban woman – a nice final moral conundrum.

The pdf also includes 2 spells (Deaden Senses and Battlemind) and 4 different pregens providing one for the Cynean (Living Crystal beings), P’Tan (Cat-like people with sinister abilities), Enuka (wild, mutating beastmen) and, of course, Human race. It should be noted that thankfully, the pdf takes into account e.g. players playing Kalisans (civilized calibans) and similar races from the NeoExodus setting when discussing e.g. diplomacy in the crowd scene.

Editing and formatting is very good, I didn’t notice any jarring glitches. The module adheres to a 2-column, full-color standard and the full color artworks ranks among the best you’ll be able to find out there. The pdf has no bookmarks, which is a bummer. The title of this module is rather grand and it doesn’t wholly deliver on the dread promised by it – First one horror is rather subdued when compared with the sourcebooks released so far.

However: This is a free module, designed to introduce people to PFRPG and the world of NeoExodus and what can I say? I really like the setting. It’s uncommon, non-standard, exciting new fantasy that throws all the tired dwarves etc. out the door and replaces them with rather intriguing races and clever political plots. This adventure, due to space constraints and its introductory nature, is more straight-forward and provides us with a selection of aptly-presented encounters that lead up to a satisfying finale while introducing players and GMs alike to the basic concepts of NeoExodus. It should be noted that the background-fluff of the setting can be downloaded for free, so GMs wanting to give this a try might check it out as well. In the end, this is a solid module and while I hope for future NE-modules to feature better maps (the quality of the cartography vs. the one of the stellar artwork is rather jarring) and more complex plotlines that take the political, social and religious peculiarities of the setting into account, I’ll nevertheless congratulate LPJr Design and all patrons involved on the creation of a nice, free module – check this out, you literally have nothing to lose by checking this out and perhaps, the module whets your taste for the setting.

NeoExodus Adventures: Undying Legacy of the First Ones is available from: