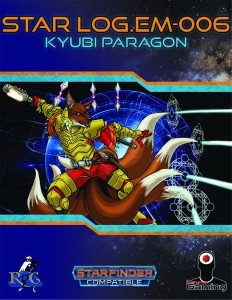 This installment of the Star Log.EM-series clocks in at 9 pages, 1 page front cover, 1 page editorial, 3 pages of SRD, leaving us with 4 pages of content, so let’s take a look!

Hej. Wait. Yep, you’d be right – the Kitsune is obviously not a race featured in the Starfinder Core Rules. Its Starfinder iteration was released in the Starfarer’s Companion by Rogue Genius Games. Since both RGG’s Starfinder supplements and those of Everyman Gaming share the implicit setting of the Xa-Osoro system, this makes sense. Now, the Kyubi paragon for Pathfinder was a massive, highly customizable racial prestige class – a degree of flexibility that this one does not attempt to duplicate, or indeed, need to duplicate, considering Starfinder’s archetype system.

That being said, this pdf absolutely requires Starfarer’s Companion to properly work.

In order to qualify as a kyubi paragon, you need to have the kitsune subtype and you must have taken Magical Tail as the 1st-level feat. Speaking of feats: The pdf includes two: Alter Shape nets you Life Science ranks in Small or Medium humanoid races: You get a specific alternate shape for these races, allowing you to Disguise yourself. The races chosen may be modified when gaining levels. Minor, and purely aesthetic nitpick: The feat notes “You must have at least 1 rank in Life Science to

select this trick.“ In an obvious cut-copy-paste-glitch. Realistic Likeness builds on the change shape racial trait and allows you to assume forms other than the specific forms and alternate kitsune forms. This has a synergy effect with the previous feat, just fyi.

Now, the kyubi paragon archetype provides alternate class features at 2nd and 9th level. At 2nd level, we get chakra, which lets you select two spells from the Two Tail Spell-array in Starfarer’s Companion. 1/day as a move action, you may add one of these spells to list of spells that you can cast with the Magical Tail feat. This lasts until you do it again and you may not use it again before finishing 8 hours of rest. Whenever you gain a level, you may replace one of the spells with one you haven’t selected, but have the required number of tails for. Starting at 6th level, you may use the ability additional times per adventuring day for the expenditure of 1 Resolve Point. Costs increase by +1 Resolve Point for each additional swap; the costs reset upon finishing an 8 hour rest. At 9th level, you choose an additional 3 spells, and when you swap spells, you may swap two at once.

Whenever a feat or class feature would net a character the option to select a spell via the Magical tail feat, he may instead elect to learn a kyubi trick. Tricks are grouped in 2 categories: Two Tail tricks require 1 feat; Five Tail Tricks require 4 feats. Yes, alas, this means that the most potent of kitsune tricks are lost to the Nova Age. Tricks also have a minimum character level. Important: If applicable, the save DC of kyubi tricks, if any, is not governed by a general key ability modifier; their save DC is governed by Charisma, regardless of your base class. It should also be noted that these tricks make use of Magical Tail’s AE (arcane energy)-resource, and as such, sport some interesting resource management gambits. The tricks include additional uses of Adaptive Fighting, shapechanging-upgrade via feats and the like. We also have the option to use shapechanging and AE-expenditure to attempt to escape e.g. grapples here. You may also wield additional tools and weapons (though that does not influence your number of attacks) with tails, and you may use shapechanging as treat deadly wounds and first aid with shapechanging, using Disguise as Medicine, with subsequent uses increasing costs. We can also find a quick shapechange that may cause targets unaware of your nature to become flat-footed (ouch!) and increased longevity by number of tails – yes, table provided. Gaining claws or fangs and limited climb/swim speed also fall into the Two tail trick category.

Among the Five Tail Tricks, we can find a pounce-like feat: When using Shot on the Run, charging or using Spring Attack, you may make an Acrobatics check (not a big fan of DC being partially based on CR of the foe, but oh well – the cost does prevent abuse here). On a success, you get to make two attacks with the triggering attack form, instead of one. Really cool: the second trick allows you to assume pipefox or kumiho shapes! Yes, this includes a half fire, half electricity breath weapon. Nice!

The pdf closes with a flavorful, brief description of kyubi in the Xa-Osoro system.

Editing and formatting are very good, I noticed no serious hiccups. Layout adheres to Everyman Gaming’s nice two-column full-color standard for the series and the pdf comes with a nice artwork in full color. The pdf has no bookmarks, but needs none at this length.

Alexander Augunas’ kyubi paragon is a concept that is near and dear to my heart. The execution of the kyubi in Starfinder is interesting, flavorful, and makes good use of the material from the Starfarer’s Companion, building on it in a tight and interesting manner. Now, granted, I wished that this was a longer file – I’m somewhat spoiled by the sheer versatility of PFRPG’s kyubi, but Starfinder’s version has to, system-immanently, go a wholly different route to account for the archetype flexibility. Locking options behind feats and using AE as additional resources definitely makes sense and the theme of flexibility and trickster-style shapechanging is retained…so, when all’s said and done, this most definitely is a well-made little supplement. My final verdict will clock in at 5 stars.

Missed the Starfarer’s Companion? That tome can be found here!