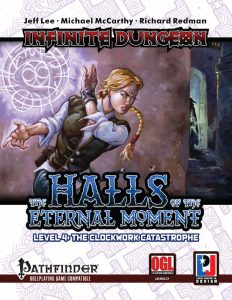 The fourth level of The Halls of the Eternal Moment clocks in at 19 pages, 1 page front cover, 1 page editorial, 1 page SRD, 2 pages of advertisement, leaving us with 14 pages of content, so let’s take a look!

As always, we begin with notes on the general property of the dungeon’s level – walls, light, etc. After level 3’s relatively tame treatment of PCs, the fourth level is back to the attrition tactics – 40% chance of being attacked, per hour. OUCH. Now here’s a mind-bender: Once the alarm is triggered, the dungeon RAW becomes easier – the ambushing default encounter is replaced with a reactivation of dormant constructs, which are finite. One note: The statblocks provided for these encounters sport some glitches: Formatting (bolding inconsistent) and also ones that influence the rules. On the plus-side, a total of 6 ghostly phenomena (harmless dressing to enhance atmosphere) is provided.

Utterly puzzling: Remember how level 3 had temporal anomaly effects? Well, they’re gone once more, in spite of level 4 being lower. I don’t get it.

All righty, let’s take a look at the content, shall we? From here on out, the SPOILERS reign – potential players should jump to the conclusion.

Okay, just GMs around? Great! So, the basic premise is that the dwarven engineer Talpidae tried to dig into the dungeon with a massive clockwork contraption. That did not go well, as the title very much implied. The catastrophe killed the crew, who now haunt these halls – they are a persistent threat…and strangely, once alarm has been triggered, they vanish. Instead, clockwork laborers and archers animate…and indeed, the pdf does employ the theme of temporal twists a bit: There are rooms stuck in time, for example. Downside: As mentioned before, the mechanical aspects fall a bit by the wayside and no, there are no puzzles that employ this angle. The PCs can’t prevent the catastrophe or influence it.

On the plus-side, while the AMAZING potential of the premise isn’t used fully, there are some nice hazards and pieces of the engine that are still operational…and lethal. Down-side: Their damage type hasn’t been properly codified. That being said, the mole machine is really interesting: Its mobility is limited and it behaves mostly like an amazing hazard – smart PCs can have a BLAST here, while those foolhardy may well end up being blasted to shreds. Defeating it is HARD, but incredibly satisfying, making this the highlight of all levels released so far. In fact, the cool encounter against the machine single-handedly improves the rating this pdf would have received. On the downside, a visual representation would have helped, big time, picturing this threat.

Editing and formatting are okay – there are a couple of glitches that should have been caught, including several that influence the rules-integrity of the content herein. Layout adheres to a nice 2-column full-color standard. The pdf’s artwork is stock and has nothing to do with the module. The pdf comes fully bookmarked for your convenience. Cartography, as in the whole series, is very rudimentary and somewhat inconsiderate – while we get a key-less version, secret doors etc. are not either version and they are not redacted.

Jeff Lee, Michael McCarthy, Rich Redman and Louis Porter Jr.,’s fourth dungeon-level does a lot of things right: The leitmotif of the dungeon does tangentially influence the proceedings. The level itself is, theme-wise, interesting. The boss fight is creative and phenomenal. In fact, this has the makings of a good, even a very good, dungeon-level. But it feels like interest was lost at one point – one careful pass to fix the issues and slightly streamline the aspects that, mechanically, are rough around the edges, and this could have scored higher. But as much as I like the boss, from the lack of global effects to the minor inconsistencies, the hiccups accumulate and tarnish what would be an easy 5 star + seal module, had it received a bit more care in realizing the evocative, cool premise of both dungeon and level. In the end, I can’t go higher than 3.5 stars, rounded down for this – it is VERY rough around the edges and needs some work by the GM to shine, but concept-wise, it does have its definite strengths.

You can get this dungeon-level here on OBS!

You can get the 4 levels of the Halls of the Eternal moment here on OBS!