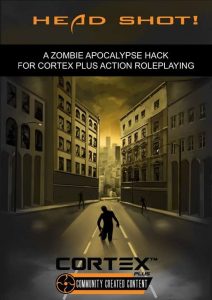 This Hack to depict a Zombie Apocalypse with the Cortex Plus rules clocks in at 38 pages, 1 page front cover, 1 page back cover, 1 page editorial/ToC, leaving us with 35 pages of content, so let’s take a look!

This review was moved up in my review-queue due to me receiving a print copy of the book in question. My review is mostly based on the print copy, though I have the electronic version as well. The review is based on V.2..

We begin with some basic considerations on why zombies walk the lands and then proceed to instructions on how to use this and how to apply components of this book beyond the confines of its frame – particularly nice there. After this, we take a look at terminology-changes in comparison to the Cortex Plus Hacker’s Guide: Agents become Survivors. Flourish Dice become Head Shot Dice. The book uses the optional rules for flourishes and contested actions. The consequence of losing a contested action is being Taken Out of the rest of the scene – this is pretty scary in a zombie context. Taking a d6 Complication is a way to get out of the conflict and must be declared before the dice are rolled for what looks like the final exchange of a Contested Action. This can, obviously, make things very lethal very quickly – hence, the book spends some time explaining nuances to the GM regarding this mechanic.

Interesting, btw.: Survivors attack zombies in the head. Period. There is no complicating mechanic here. Regular zombies come as either crawlers or shamblers – both of which are pretty self-explanatory.

Character creation has been slightly updated: 2 methods of attribute distribution are presented: Either 2 attributes get a d10, one a d8 and two a d6 or one gets a d10, 3 a d8 and one a d6. The character gains 3 distinctions. They also gain 2 specialties at d10, 2 at d8 and 4 at d6. The rest are d4s. The character gains two signature assets at d6. Characters have 0 mission successes at the start of the game and start with one plot point.

Instead of roles, the characters have attributes, which are pretty self-explanatory: Beguile, Bold (willpower, psychological stamina, etc.), Brains (how smart, not how long it takes a zombie to eat you… ;P), Brawn, Brisk (hand-eye coordination). Particularly fitting distinctions are presented in a concise list. Specialties are NOT tied to a givenrole/attribute, instead having a die rating assigned to them. A significant array of them is discussed, from driving to sneaking or tricking folks. Signature assets can include super backpacks, entrenching tools, dogs, doctor’s bags, etc. Lacking roles, talents are tied to attributes instead, but the original restriction remains in place: You must have a d10 in the attribute to have the talent. There are also talents sans required attributes and those that can be qualified for via multiple attributes. The next couple of pages cover these and show not only an impressively crisp rules-language, but also a generally solid balancing of the talents in question.

From here on out, we have already covered the necessary player-rules and move into “The Guts” – i.e. the anatomy of GMing/running the hack.

Missions are the respective adventures: They are structured by the Objective and the Difficulty Die rating; 8 sample broad objectives are included. The mission’s difficulty die is usually stepped back until the mission proves to be a success…though getting back to safety is an added challenge posed to survivors. The mission die behaves like a complication that only is used against the party when pertaining directly to the given situation, with the conditions, i.e. the steps that can be taken to achieve the objective, can be individually adjusted by the GM. The general notion created by Cortex Plus’s system here does btw. a rather good job at depicting the hindrances and “everything can go wrong” tropes that we all know and love from zombie-based media.

The second mechanic that is crucial to Head Shot!’s gameplay would be the rather hackable viral pool. Usually, that pool starts at a d4 and it is a representation of zombie density. The viral pool’s increase can be handled over time, by action, via moaning zombies etc. – all ridiculously easy, and once it passes a d12, a second die is added and so one. The pool may decreases by keeping quiet, staying hidden etc. When the viral pool steps up, a number of zombies equal to the die roll of the newly stepped up pool show up at Long Range – which may be down the block at the end of a REALLY long corridor in an airport, etc. When the viral pool reaches d12, an Alert occurs, which can result in encounters, the jeopardizing of resources or e.g. ammo running low – and, as the whole mechanic, this component can be scavenged and adapted rather easily. There are also variations on these – like Friendlies doing something stupid, enemy survivors appearing, etc. This chapter, as a whole, provides some really cool modifications and constructs that can prove valuable even beyond the confines of this hack.

In chapter 3, we take a, in-depth look at the basic zombie types: We discuss their general senses, the effects of their moaning, the level of agility, endurance, strength and intelligence exhibited. The effects of decay and possibility of mutation or the possibility of a hive mind are mentioned. The basic zombie range from crawlers (d6) to shamblers (d8), runners (d10) and behemoths (d12) – the latter being particularly large or strong super-zombies. The variants discussed would be Screamers, Infested, Spitters, Fused zombies and Leaders, who retain a semblance of a spark of cunning. The respective variants do come with discussions of their tricks and examples from media. The details of the zombie virus and how it spreads are not codified per se, instead providing a general notion of how everything works out. Horde zombies and elite zombies are an easy way of thinking about these and the pdf makes sure that you can properly use them. Voodoo-zombies are covered, and the Unliving variant of them provides another modification that fans of the genre will appreciate.

As in TWD, the true antagonists, more often than not, will not be the zombies themselves – hence, we take a look at classic foes next: Bandits and Raiders, warped cults, voodoo cults, madmen and psychopaths, protectors, undead harvesters – the big classics all get their due consideration here.

Environment is, unsurprisingly, often represented by location traits – the most fitting have been noted, and the pdf adds quite a few more to the mix: Vehicle graveyards, pitch darkness, untraveled roads – pretty cool. Finally, we take a look at wild (and dangerous) animals and vermin and end with an afterword as well as a character sheet. This sheet, just fyi, has been included in a form-fillable version – big plus there!

Speaking of which: No matter the format of your GM-screen, the pdf ALSO comes with color-inserts that note the respective pages, crucial rules, etc. – once, these come with a two-column layout and once with a three-column layout – big kudos for going the extra mile here!

Editing and formatting are top-notch, I noticed no significant glitches herein. Layout adheres to a 2-column b/w-standard (with blotches, stylized zombies etc.) and the pdf comes fully bookmarked for your convenience. The b/w-artwork within is solid. The softcover is a nice booklet and pretty inexpensive, so kudos there – personally, I prefer it.

Tim Bannock’s passion for the zombie-genre show on pretty much every page: This is a true zombie-enthusiast’s supplement – it is a love-letter to the genre that covers pretty much all the basics we come to expect from zombies as a whole. I enjoyed picking apart Cortex Plus’s peculiarities while testing this and indeed, the book provides value beyond the confines of its rules-system: An experienced GM can scavenge e.g. the Viral Pool and reappropriate it; the design is interesting: Much of the mechanics here simulate something akin to an AI director in contemporary computer games: Alien Isolation, for example, has two AIs operating: One for the Alien and one that is in charge of keeping up the tension, directing the alien roughly in your direction, etc. Similarly, TWD and similar zombie movies seem to operate both on the drives of individuals and a second, impersonal dramaturgy that this system simulates really well.

Mechanics-wise, I thoroughly enjoyed this book. That being said, the focus on the more widely-represented zombie-types does mean that the pdf won’t provide mind-blowing new zombie-types; neither the plant-animated zombie, nor radiation zombies, alien-experiments or the like are covered – this is about the classics, though I couldn’t help but feel that going to the far reaches of the genre would have provided the triumphant finishing flourish for this supplement.

As provided, I enjoyed Head Shot! More than I thought I would; its ideas and design-paradigms have enriched my games, even if the discussion of the classic zombie types didn’t bring that much novelty. Still, rated as a crunch-book and hack, this represents a worthwhile offering. My final verdict will hence clock in at 4.5 stars, rounded up due to in dubio pro reo.

You can get this cool Zombie-hack here on OBS!