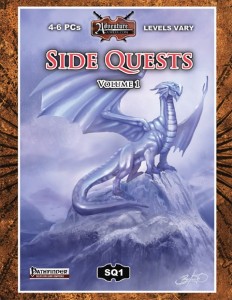 This collection of side quests clocks in at 56 pages, 1 page front cover, 1 page editorial, 1 page ToC, 1 page SRD, 1 page back cover, leaving us with 51 pages of content, so let’s take a look!

This being a review of a collection of short sidetreks, the following contains SPOILERS. Potential players should jump to the conclusion.

The first side-trek would be “Contagion”, written by Will Myers for characters levels 5 – 6, which coincidentally also doubles as the prologue for the Fallen Leaves adventure arc.

The frontier’s village of Rybalka, the PCs home if you’ve been following the A-series of AAW Games’ modules, has seen a series of very weird occurrences – hunters suffering from bad luck, a deterioration of their own performances and when even the perfectionist dwarven smith Quorron’s good see a decrease in quality, it is obvious something is odd – though strangely, no one seems to have anything in common – not even sage Yuri Statel can find a magical reason. Why? Because the plan enacted upon Rybalka is quite nasty: The water-supply has been cursed and sooner or later, a trip towards the Dark Wood to find the source of the curse will be in order. After dealing with a dire boar, the PCs happen upon a group of Vikmordere. The people of this rare and isolationalist ethnicity have acted as a foil and intriguing backdrop in and around Rybalka for some modules, so in case your PCs are on the warpath with them, this may be a chance to turn things around – why? Because the group is here due to rumors of another group being spotted in their lands – so no, the Vikmordere seem to not be the source of the troubles.

And indeed, finding a crossing, the PCs happen upon a strategically-placed flask of curses (as well as potentially the rare bark that can be used to counter the curse – if the PCs can brave the sleep-inducing effect the trees exude). Upon their return to Rybalka, the PCs find the town in a state of upheaval – Vikmordere are attacking and have entered the cathedral! Entering and besting the raiders, the PCs hopefully take some alive to question them – for their assault was not bred from hatred: The “Vikmordere” transform back into elves and share that they have their own troubles, with an artifact that was supposed to be hidden here being their way to salvation – alas, the item is gone and the PC’s troubles have just begun… This module per se has a cool premise, but it also fails somewhat – the investigation is not provided, but instead reduced to a single check when making the deductions themselves would have been good design here – essentially, the premise is too ambitious for the limited space and scope available.

The second module in here is Giant’s Cavern, written by Stephen Yeardley for PC levels 8 – 11. This sidetrek begins with a lone survivor – the gnome priestess Tonttu Pappi, last of an adventuring party, seeks the PCs assistance: They were on the verge of finding a giant’s greatsword, hidden on the shores of Serpent lake in a cliff-side cavern, only to run afoul of a strange, lost-like darkness. And indeed, the PCs better listen CAREFULLY to the sequence of events and how they happened, for the gnome’s tale of woe helps navigate the deadly traps that bested the poor adventurer’s group -and they’ll need this advantage versus the undead guardians of the cavern. When they finally find the unwieldy greatsword and the remains of the unfortunate gnomes, they’ll have a decision to make – keep the oversized (and overpowered) weapon or hand it off to the gnome? I’d certainly suggest for a GM to do the latter, since the weapon’s non-standard wording makes actually understanding how it works not particularly easy – or what weapon group it is, for that matter – as written, it looks like a two-bladed sword, not a greatsword.

The third module within these pages would be Jonathan G. Nelson’s Serpens Sanguis for PCs levels 9 – 11. The Serpens Sanguis have featured before in the lore of Aventyr’s modules – the dragon-worshiping cult once again features here. The PCs, in search for a dragon’s lair, stumble across more than they had bargained for – now, yes, there is a draconic adversary to be found herein, but ultimately, that’s not what this module is about – instead, the main draw of this little exploration would be the introduction of the Serpens Sanguis as a lore component/backdrop – and as a grisly reminder that even nasty people can fail. On a rules-level, the PCs will have to brave the despicable effects of an artifact most foul, the Orb of Despair – with long-range crushing despair and rage, the effects of this nasty thing will be felt – oh, and it is the boss of this module. In case you haven’t noticed: The enclave of the cabal has been pretty much wiped clean, with only undead animated by weird magics and mental powers remaining in an underworld lake – for a creature most strange has eradicated the cadre… something that may rise again…

The final module, once again penned by Stephen Yeardley, is called “Turn again, turn again” and is intended for PCs levels 8 – 12. Gods are odd. Placing strange chests that reveal the true nature of those opening them, placed in hard-to-reach places? Well, Juriendor, a cleric, seems to have unearthed the resting place of one such chest 8though he believes it to be the only one) and is willing to share this information in exchange for a fair share of the loot gathered. And indeed – loot there is: Even before the first encounter, a whole slew of non-metallic, magical equipment can be found – which may turn upon the PCs at an inopportune moment – and yes, beyond a stone tendriculous, spirits may rage upon taking these as well. Besting the beasts, the PCs confront a naga and his scale-puzzle. The PCs thus venture forth, passing archways with glowing runes that alternate in a code representing alignment components – and then enter the loop. Essentially, the PCs find themselves in a strange magical loop that presents different guardians depending on the alignments chosen, offering various pieces of enlightenment as they proceed – and once they return to the naga with a magically-changed outlook on life and marked by the cavern, they may indeed find the treasure – and yes, change back, should they choose to, by simply passing the arches in reverse order. I really like the inventiveness of this module, but at the same time, the whole set-up could have imho used an explanation of how the dungeon works that is a tad more concise – I considered this one to be a tad confusing in its set-up.

Editing and formatting can still be considered good – while on a formal level, this collection does not sport glitches, the rules-language of several rules-relevant pieces of content do not adhere to teh standard – from weird decisions of checks used to quite slightly confusing items and missing italicizations of spells, there are some glitches in here. Layout adheres to AAW Games’ beautiful 2-column full-color standard with quite a few nice full-color art pieces. Cartography is a blend of CGI-renders and hand-drawn maps, with especially the latter being wonderfully old-school and beautiful. The pdf comes fully bookmarked for your convenience.

Will Myers, Jonathan G. Nelson and Stephen Yeardley deliver a nice array of mid-level sidetreks in this pdf, and indeed, what impressed me most about them would be the atmosphere and sense of wonder in the face of the unique locales featured that they manage to convey in spite of their brevity. Contagion is a nice, weird prologue (with a horribly mauled investigation-abbreviation that could really sink the module at the table), while the Giant’s Cave and the final module showcase Stephen’s talent for unconventional set-ups. Finally, there is a reason I almost always adore Jonathan’s writing – the hooks evoked in his short module are very much fun and should be considered inspired. Now, at the same time, one can and does notice that the sidetreks herein stem from a different time in AAW Games’ history – the terminology of the crunch-components isn’t as precise as in their most recent offerings; the explanation provided for e.g. the last module’s puzzle/test isn’t as didactically sound as in more current books…

And, alas, these imprecise components do drag down these side quests a bit. I also felt that, both the prologue to Fallen Leaves and Jonathan’s module in particular, would have made even better full-blown modules: The evocative concepts and ideas provided definitely would have supported a full module for each. Now, that may be a good thing for you or not, but it is, ultimately, the consequence of the authors managing to world-build something compelling and fantastical that makes sense – the aforementioned trees being one of my favorite components herein – just one line, and immediately compelling.

However, this narrative strength the company has since then thankfully expanded upon, does not necessarily mean that the aforementioned issues, which partially extend to the pacing of the modules, are alleviated. While I do love several concepts herein, I do feel that this selection of side quests will not be for everyone – some GMs will be all over the fluff and evocative places, whereas others will be annoyed by a hand-waved pseudo-investigation in the first module or the mechanical hiccups. While personally, I fall into the former category, as a reviewer, I have to take the whole deal into account – and while by no means bad, this collection also falls short of the places among my higher-rated verdicts. Hence my final verdict will clock in at 3.5 stars, rounded down to 3 for the purpose of this platform.

You can get this collection here on OBS!