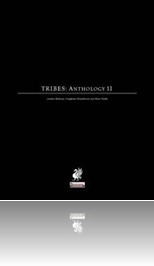 The second anthology of Raging Swan Press‘s critically acclaimed TRIBES-series is 109 pages long, 1 page front cover, 1 page advertisement, 3 pages editorial, 2 pages of ToC, 1 page advice on how to read statblocks, 1 page SRD and 1 page back cover, leaving a total of 99 pages of content, so let’s check this out!

The pdf kicks off with compiled lists – statblocks by CR, compiled tribal feats, magic items, alternate class-features and spells – all of these nifty pieces of crunch are indexed and listed for your convenience, making this anthology rather user-friendly. After that, we’re introduced to the first TRIBE, the Centaurs of the Bleak Moor and immediately, one thing comes to one’s attention – the nifty poems/bard’s songs that each component pdf featured in the original editorial/ToC-section get the spotlight they deserve by being featured on the individual chapter headers -nice!

But onwards to the centaurs: This tribe is rather peculiar in the context of the TRIBE-line not only due to being the one that expanded the default setting of the lonely coast by providing an additional map, but also since the centaurs are rather as likely as work as antagonists as they are likely to work as allies for the PCs. The Bleak Moor is as much a character in this write-up as the individual NPCs and a rather extensive selection of terrain features, lore etc. are provided. It should also be noted that centaurs now can be made more unique with a table of colourings that lets you improvise their look more freely. Fans of halfling slingers should definitely check this chapter out and ask for DM’s permission to use the slinging stones and superb feats to enhance their capabilities. The terrain-control spells, though, are another highlight that should definitely not be overlooked. My verdict for the Centaurs originally was 5 stars and it remains as such – onwards!

The second TRIBE contained in the pages of this book is another special one in the series in that it is to date the only one that featured rules for a new race that can potentially be used for PCs, the half-goblin. That being said, they also come with a detailed map of the Tangled Wood (their home) and rather extensive information on their kind, social structure etc., making the half-goblins stand out surprisingly well and feel not like yet another race of half-breeds. Even better, with Paizo reimagining the goblin as those lovely psychotic rascals in Pathfinder, the half-goblins can easily serve as a substitute for the less goofy and more organized, threatening version of goblins in former editions. My only gripe once was the lack of a woodland-list of terrain features for the tangled wood (similar to the one provided for the bleak moors)and none is in this book as well. Seeing that the overall TRIBE has lost none of its appeal, my final verdict for the stand-alone still remains – 5 stars, just short of the seal of approval.

Marc Radle’s Lizardfolk of the Dragon Fang-TRIBE have a special place in my heart – not only were they the first TRIBE to feature a sample elaborate ceremony and add a truly distinctive vibe to its identity, their inner-tribal politics, long-term goals etc. The Lizardfolk presented here run a fine line between noble savage and barbarous threat and also make for one of the scarce TRIBES that can work in a rather varying way in your campaign. The extensive swamp-features provided for sample encounters are another major plus. However, the “Pierce” and “Greater Pierce”-feats remain unchanged – their intention being to enable the TRIBE to impale foes and strike the foes behind them with spears etc., piercing multiple foes. Unfortunately my gripe from when I originally reviewed the TRIBE has not been taken care of – as written, the feats allow you to potentially ricochet with a spear as worded – no additional clarification that the targets have to be in a line has been provided, leaving the feats just as open to misinterpretation as they once were. For this lack of revision, I’ll detract a star from my erstwhile 5 stars rating for a total of 4 stars.

Still one of my all-time favourites of the series, the Minotaurs of the Black Hills are a smart and civilized tribe eschewing the barbarous rage usually associated with our favourite horned brutes for a rather sophisticated social structure that centres on serving their strange alien bat-like elder-race masters and waging an unrelenting war against their hereditary enemies, the Centaurs of the Bleak Moor. Add to this rather cool background some of the best artworks in the series as well as full stats for the elder race and it should come as no surprise that the minotaur still hold up very well in the overall context – my verdict of 5 stars + seal of approval still remains and if you’re really looking for some additional pieces of stellar material to supplement them, I’d heartily recommend Rite Publishing’s “In the Company of Minotaurs”.

The final TRIBE in the anthology , Landon Bellavia’s (who has btw. created some awesome pieces for Raging Swan Press) Were-rats of the Roach-run Sewers come with sewer features, shape-changing information, a dual cleric domain/witch patron and comes with a cool innovation: The rank-and-file also comes with bullet-point style sample personality information. On the down-side, I once complained about a lack of cohesion in the tribe – Landon has created great NPCs in this particular offering, but the TRIBE itself remains rather dull in direct comparison. While my verdict of 3.5 stars might seem somewhat harsh, I still maintain that in the overall line, the were-rats are among the weakest of offerings.

I should also mention that each tribe’s chapter concludes with a list of where the respective crunchy bits can be found.

As I’ve come to expect from Raging Swan Press, editing and formatting are top-notch and I found no glitches – quite a feat for a book of this size! Layout adheres to RSP’s excellent, printer-friendly b/w-2-column standard and apart from a version optimized for printers, we also get a second version of the pdf optimized for screen-usage that is only 5 mb large. The pdf comes with extensive, nested bookmarks and generally, the b/w-artworks are awesome though here and there you’ll find pieces you might be familiar with from other publications. The cartography is top-notch. Crunch-wise, there is not much to complain about regarding the whopping array of stellar statblocks and NPCs herein.

With the minotaurs and centaurs, two milestones in the series are included, for Creighton Broadhurst’s two interconnected tribes set the bar higher for the rest of the series, opening the doors for e.g. the stellar orc and bugbear installments that we’ll probably see again in the third installment of the TRIBES-anthologies. Somewhat to my disappointment, this anthology feels rather like a compilation without central improvements – neither the were-rats, not the easily misinterpreted and abused pierce-feats have been expanded in any way, something that does not quite stand up to the level at which RSP has set the bar.

Speaking of setting the bar high: The TRIBES herein are great, but unfortunately, they don’t stand a chance against another release by Raging Swan Press: “Scions of Evil” mops the floor with this book. Not only does it provide almost double the content for just one buck more, it also features some truly awesome additional and new content in the guise of new NPCs. The second TRIBES-anthology, in direct comparison feels like “only” a very good compilation. Now if you take the individual verdicts, you’ll still see how great this pdf is and if you have refrained from checking out the component pdfs so far, I urge you to buy it. But if you already own them, there’s literally no reason I can think of why you’d have to go for this. Seeing the lack of improvements on the source-material and bonus-content, I can only unanimously recommend this to those of you who have not checked out the component pdfs or who need these critters in print (as soon as that’s available). Thus, my final verdict will be “only” a 4 stars – unless you don’t have these gems yet: Then, go for this – for you, this is 4.5 or even 5 stars!

TRIBES Anthology is available from: