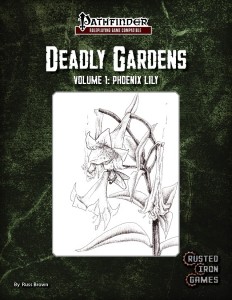 The first supplement released by Rusted Iron Games clocks in at 5 pages, 1 page front cover, 1/2 page of SRD, leaving us with 3.5 pages of content, so let’s take a look!

The Deadly Gardens-series obviously depicts uncommon plant creatures at an affordable price – the creature herein being the Phoenix Lily – but before we dive into that one, I should mention the two magic items provided in the beginning, the first of which elicited a “D’OH, why didn’t I think of it?”-response – the Specimen Jar allows you to collect sample, which then remain fresh – whether it’s volatile, fast decaying material of the foes you research, seeds of odd plants or something different. Nice one! The second one, the Fecund Totem, greatly increases plant-growth and even enhances plant-creatures – the presence of such an item may provide an interesting tactical component to a given fight – or act as a quest item to combat a particularly nasty blight.

The creature – well, Phoenix Lilys clock in at CR 4 – and generally, are interesting: The plants can emit devastating scorching rays and have an inherent resistance to fire, one, which, when surpassed, may result in the plant exploding. The creature is nice, fun and comes with a gorgeous b/w-pencil-drawn artwork I did not expect from such an inexpensive, short pdf.

The supplement does not end here, though -instead, we get a short primer on harvesting natural items – including, obviously, the phoenix lily’s volatile blossoms as well as fire beetle glands, basilisk blood and shambler wafers. I thoroughly enjoy this take on harvesting monsters etc. – I’ve been basing my main campaign’s whole crafting system around the harvesting of the like – so yeah, awesome, particularly now that the presentation has been further streamlined. Even cooler, the pdf takes Basilisk’s Blood and Phoenix Blossoms and codifies them as power components – with different effects for various spells, whether if used as focus or material component – a phoenix blossom used with burning hands, for example, renders the spell’s area of effect a 20-ft.-line. This is intriguing and supplements the notion of the magical world well – kudos!

Editing and formatting are top-notch, I noticed no glitches. Layout adheres to a nice, printer-friendly two-column full-color-standard and the pdf now is fully bookmarked. The pdf’s artwork is gorgeous and deserving of praise, especially considering the low price point.

Russ Brown’s first offering is a pretty impressive one – this small pdf provides an interesting adversary, some nice botany-themed option and goes a step beyond what would be required regarding the immersion-enhancing aspects of rooting (haha) a creature within the world by tying it into items, magic, etc. For the low asking price, this is a fun, neat supplement that makes me look forward to the next supplements. My final verdict will clock in at 5 stars + seal of approval.

You can get this inexpensive supplement here on OBS and here on d20pfsrd.com’s shop!