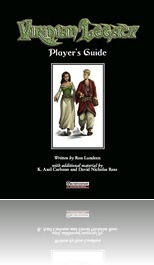 There has scarcely in my opinion been a 3pp that has undergone such a radical change as Headless Hydra Games – from beginnings that could be considered to be fluctuating in quality at best, the company has grown to produce a stellar city campaign setting with their Mor Aldenn supplement – one that actually made my personal Top-10 of 2011.

The City of Mages came to life and identity in a rather glorious pdf that is not only cheap for the amount of quality, but brims with imagination and its very own identity. Now, the Viridian Legacy AP finally looms and Ron Lundeen, mastermind of Run Amok Games and author of two stellar adventures published by HHG as well as his own superb Run Amok adventures presents us, along with K. Axel Carlsson and David Nicholas Ross with the free player’s guide to said AP – but is it enticing? Let’s see!

The pdf kicks off with an introduction and brief overview of the city’s history before we delve into the topic at hand – characters and how to fit them in the upcoming AP. The discussion kicks off with an overview of the races available – all the basic races get an additional racial trait astute players may use to further customize their characters. It should be noted that the races peculiar to Mor Aldenn, centaurs, Gaiants and Sprites also are covered, though they get no new racial trait. A bit of a pity, but okay, I guess.

Next up is the discussion of classes, including a list of domains and subdomains for divine casters, sorted neatly by belief as well as a new oracle mystery, the legends mystery. This new option allows an oracle to channel the stuff of legends and aspire to become one herself by gaining lucky rerolls and similar destiny-themed abilities. The mystery seems well-balanced, if not too exciting and again, classes peculiar to Mor Aldenn like the troubled Clockworker and the excellent Spellwarden-class are covered as well. It should be noted, though, that while gearworks play a role in Aldenian economy and life, no black powder-or eastern-related love can be found herein, i.e. the gunslinger and samurai/ninja-classes can be found herein. While some may mourn this decision and I particularly am a huge fan of the gunslinger, I think a slightly restrictive decision like this keeps the focus of a setting tighter.

A total of 17 traits are included in the player’s guide as well and can be considered welcome additions, doing what a trait does well indeed – anchor a character in the respective campaign setting, providing minor angles and associated bonuses to explore in the character’s development while providing minor bonuses. A total of 16 feats are also part of the deal: From the ability to temporarily making your melee weapons or projectiles deal fire or cold damage to reserve-feats: Essentially, these let you choose a physical or mental ability score and add bonuses/rerolls to checks a limited amount of times per day to the ability to ask rivers or trees for answers and even some feats that will help agile swashbuckling bards and similar characters. All of the feats are interesting enough to be taken and none of them felt unbalanced or off to me.

A total of 8 new magic items and a peculiar table is given – since Mor Aldenn is the City of Mages, it is suggested that player characters start play with a minor magic item and thus, the table is provided, should you wish to randomize the process.

The final section provides us with 20 different spells taken from the neat spell compendium “Eldritch Secrets”.

Editing and formatting are top-notch, I didn’t notice any glitches. Layout adheres to a two-column, full-color standard with a beautiful border and awesome illustrations. The pdf has no bookmarks, which is a minor bummer. When all’s said and done, I’m glad to report that this player’s guide succeeds at what it sets out to do – provide the tools for a player to create a character invested in protecting the city of mages (that’s about the only requirement) and a whole neat slew of customization options. The new crunch is solid and thankfully, SPOILERS are absent from the pdf – One thing I’d urge prospective GMs to do, though, Is print out the sections on the Spellwarden and some of the legends/festivities of the city to enhance the immersion of the players in the setting. That being said, since this pdf is free, achieves what it sets out to do and is professionally presented and makes me look forward to the AP, my final verdict will be 5 stars.