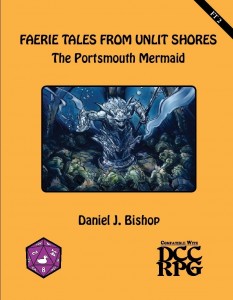 This module clocks in at 44 pages, 1 page front cover, 1 page SRD, leaving us with a massive 42 pages of content, so let’s take a look, shall we?

This being a review of a module, the following contains SPOILERS. Potential players should jump to the conclusion. You do NOT want to spoil this module, believe me.

All right, only judges remaining? Great! We begin this module in the aftermath of the superb first two DCC-modules in the series, 15 miles south of the Grimmswood wherein the PCs had ample challenges of the most peculiar and interesting kind. If you haven’t read the first two modules, let me recommend them wholeheartedly.

So, Yuletide is upon the less-than-subtle named town of Portsmouth and the adventure takes place during the 12 days of celebration in town – the problem here being that things are not simple. In fact, the town, once known for the rich seafood that could be wrestled from the waves had seen a plunge of efficiency only rectified in the relatively recent history – unbeknown to the PCs, there is a power struggle going on between servants of Dagon and his esoteric order and Cthulhu cultists – but that only serves as a kind of backdrop and variant on the theme, for essentially, this is an adaptation most twisted of the Little Mermaid: Prince Manxus was saved from certain death by her and while she had lost her voice due to the deal with the Sea Witch and while every step on land hurts horribly, the mermaid has managed to capture Manxus’ heart. Until the Dagonites intervened with the tantalizing hybrid Orne and a magical orb, seeking to seize control over the town. The timer is ticking and the fate of the town is at stake – as is the mermaid’s very soul.

And yes, the tl;dr version would probably be “The Little Mermaid” in Innsmouth. Now, admittedly, this type of reductionist summary would not do the module justice. Why? Because this can be considered pretty much an impressive sandbox that presents the town in lavish detail, while also preventing a time-driven time-line of events that feature read-aloud text and the like. With rumors and signs of the hybrid-inbreeding associated with the very theme of Innsmouth, we have a significant level of detail an atmosphere, against which a judge can craft a tale most harrowing: The contrast of cthulhoid horror and the gothic horror elicited by the original fairy tale can be considered a truly stunning experience if handled with proper care.

Much like in the previous modules of the series, I find myself often wondering how to adequately portray the module, mostly due to one simple fact: This one lives by the details. The disparate themes are crafted together in a concise way that very much lives from the details, which ultimately also can be used to govern the investigation towards its conclusion. What level of detail? Well, what about mapped tunnels below the town? Street names? Aforementioned tables? Now don’t get me wrong – this *is* a sandbox and as such, it does require some investment on behalf of the DM to properly pull off. At the same time, though, it does generate a compelling and unique atmosphere that deviates significantly from the goal one would assume a module featuring the theme of degeneration. Oh, and in which other module does it actually make sense to ally yourself with cultists of cthulhu on a mission of love? Yeah, pretty awesome. The conclusion of this investigation, though, ultimately will see its fair share of confrontation, so yes, if you’re itching to roll some bones and kick some Dagonite ass in the name of love, that’s part of the deal as well.

It should be noted that the beautiful full-color maps comes with player-friendly versions and even as high-res jpgs – nice!

Editing and formatting are top-notch, I noticed no significant issues. Layout adheres to an elegant, old-school 2-column b/w-standard and the pdf comes fully bookmarked for your convenience. Furthermore, the module sports numerous gorgeous original b/w-artworks and the maps, as mentioned before, in player-friendly and high-res versions – kudos for going above and beyond.

Daniel J. Bishop has a wonderful style – he can write creepy, disturbing sword and sorcery material with a great pulpy old-school flair, yes. But the unique characteristic of his writing and what makes me actually run his modules, is that he can blend this with a subdued whimsy and a feeling for the mythological that is grounded in well-researched tasks and a broad basis of knowledge of topics that resound.

Arguably, the themes of this module should not work with one another, but their synthesis is so well-crafted and so compelling, it ends up actually working. That being said, this is not only a module – in fact, you could easily enjoy this module as a sourcebook of an interesting, disturbing town, providing a truly captivating look at yet another glorious facet of the world he’s weaving. With optional tie ins and information on the repercussions of the first two modules, in case they have been played, this one becomes yet another triumphant installment in the series and further cements Daniel J. Bishop as an excellent writer whose adventures I very much anticipate with a baited breath.

You can get this awesome, odd dark fantasy/horror-ish module here on OBS and here on d20pfsrd.com’s shop!
Endzeitgeist out.