Mythic Minis: Feats of the Sharpshooter

Mythic Minis: Feats of the Sharpshooter 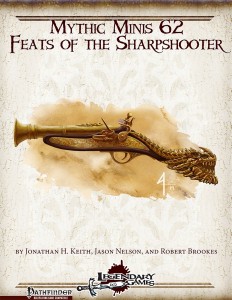 -Arc Slinger: Reduces range penalties with sling or sling staff by tier; Point Blank Shot bonuses extend to 50 ft. (80 ft. for sling staff); +5 ft. per tier. No penalty to atk or damage when using non-sling-bullet ammunition as long as size fits. 1 use of mythic power = +1/2 tier to damage for tier rounds.

-Charging Hurler: +1/2 tier to atk with ranged charge attacks; exchange the atk-bonus for a damage boost in a 1 for 2-ratio. Mythic power negates the penalty to AC and increases the size of the projectile by 2 sizes.

-Improved Charging Hurler: When the target is within 30 ft., add tier to damage. If you hit, expend mythic power to bull rush the target, with +5 per 10 points of damage you dealt. Love it!

-Clustered Shots: When shooting at the same target as a full-round action (or via another ability that allows you to execute multiple shots versus the target), add damage equal to the number attacks that hit the target. Additionally, you treat all as one type of attack for the purpose of overcoming DR or death from massive damage (if you’re playing with the latter in mythic, you’re more masochistic than I am…). Also gain +2 to atk versus an opponent you’ve hit in a given round. Urgh. The bonus itself is not that bad – the DR-overcoming is nasty, though. Why? Shuriken. OUCH.

-Impact Critical Shot: Adds stagger to the effects of the maneuvers of the base feat.

-Opening Volley: Render foes flat-footed to your melee attacks that you hit with a ranged weapon. This is extremely strong for the right build. Not gonna happen in my game.

-Prone Shooter: While under the benefits of the feat, 1/round negate an attack by moving 5 feet. Per se cool – but is this a 5-foot-“crawl”? Does the movement provoke AoOs? I think it doesn’t but if it does and an enemy keeps you fixed, does the attack you sought to avoid still hit? No idea. Needs clarification.

-Prone Slinger: Creatures are flat-footed to the first ranged attack you make each round. Not gonna happen in my game. Imho broken.

-Redirected Shot: Use the feat after the results of your ally’s attack have been made known. Additionally, if cover from you and your ally to the target differs, use the lower of the two. Nice one!

There is more on the SRD-page:

-Sling Flail: Add ranged attack as an immediate action to your melee attack executed with a sling. This attack does not provoke an AoO from the target.

Jonathan H. Keith, Jason Nelson and Robert Brookes have crafted a diverse array of sharpshooting feats and some indeed are diverse and utterly intriguing in their tactical options. Alas, if ranged combat did not need one thing, much less so in mythic gameplay, then that would be even more damage output -which some of these feats frankly provide. The easy access to guaranteed flat-footed conditions, even when applied to otherwise not so-great base feats also overshoot their goal by quite a bit and end up being just exceedingly nasty. In the end, I considered this mythic mini a mixed bag and thus will settle on a final verdict of 3 stars.