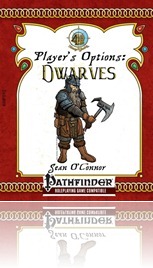 This pdf from 4 Winds Fantasy Gaming is 13 pages long, 1 page front cover, 1 page editorial, 1 page SRD, leaving us with 10 pages of content, so let’s check out these new options for the dwarves!

The pdf kicks off with new variant dwarven races, the first of which would be the Half-Dwarf, who gains +2 to any attribute, 30 ft movement (and is hindered by encumbrance), darkvision 30 ft., count as dwarves and humans, gain dwarven weapon familiarity, +2 to saves vs. spells, spell-like abilities and poisons, +2 to CMD vs. trip and bull rush, +2 to craft related to stone and metal, +2 to tracking vs. giants and +1 to atk vs them, +2 to climb and acrobatics on narrow ledges as well as acclimatization to high altitudes and a bonus feat.

Stone Dwarves gain +2 to Str, Con and Wis, -2 to Dex and Cha, count as dwarves, gain dwarven weapon familiarity, 60 ft. darkvision, +6 vs. bull rush and trip attempts, stonecunning, can take 5-foot steps in difficult terrain due to rubble/stones and can create difficult terrain in a 10 ft. radius centered on them. They also gain fast healing 2 (up level x2 max hp) when hit by acid. The concept of this race is essentially a more extreme dwarf and thus, the race’s significant benefits are offset with characteristic weaknesses: Stone Dwarves only get a movement rate of 15 ft. (which would spell certain death in my campaign, but perhaps my players are forced to run more often than usual from collapsing structures, eldritch tentacles from the dark beyond or chase down foes…) as well as a fear of being immersed in water and a crippling penalty to swim-checks. While not too awesome or suitable for any campaign, as NPCs or for certain types of campaign, this should be interesting, amping up all clichés about dwarves up to eleven. Both variant races thankfully come with full age, height and weight tables.

After these two, we are introduced to a variety of new feats with the [Dwarf]-descriptor, available exclusively to dwarves and thankfully also collated in an overview-table. A multitude of these feats grant you +2 bonuses to skills that scale up to +4 at higher levels, granting you e.g. a powerful baritone, enhancing your singing. There also is a feat that grants you +4 to CMD vs. disarm-attempts and one (exclusively available if you have no access to the rage-class feature), that allows you to enter a fearsome dwarven rage (like the rage spell) for Cha-mod +1/4 levels round per day. This duration can be expanded by casting rage on you, but expends another one of the cha-mod times per day you can enter the rage. Interesting feat! Also rather cool, certain dwarves may now remain conscious when dropped to 0 HP or below with will-saves – a neat idea that won’t see any use in my campaign – since I houseruled it to work for all races! Suffice to say, I like this feat! The influence of “The Hobbit” can be seen in another feat that allows you to call a giant eagle. There also in a feat that grants you bonuses vs. ancestral foes that drove you from your homeland, a feat that adds +2 (+4 at higher levels) to unarmed damage and a feat that reflects your affinity for trekking through difficult terrain. The Dwarven Beard-feat grants you a +1 circumstance bonus when dealing with dwarves that feels a bit weak for taking up a whole feat – especially if your campaign is like mine and being doused in fire may scorch your hair off…

The cool option for flaws (introduced in 4WFG’s Player’s Options: Flaws) are expanded in this book as well: You may take them at 1st level for 3 skill points or a bonus feat. The flaws can be bought off by specific actions and in my opinion, provide great opportunities for roleplaying and character development. From Gold Fever, compulsive hoarding to overweight, prejudices, sinking like a stone to being beardless, these flaws all rock and provide cool character angles. Two thumbs up for them!

The pdf also introduces the warbrand and dwarven warscythe-weapons as well as two new types of dwarven maille and other mundane items that range from the obligatory ale to hard-tack and dwarven green-cheese as well as fake beards for dwarven females (controversy starting in 3…2…1…)to finally dwarven stone drums, these items are also rather neat.

Editing and formatting are very good, I didn’t notice any significant glitches. Layout adheres to 4WFG’s 2-column standard and the pdf comes with stock-art and is fully bookmarked with nested bookmarks, which is a definite plus. I’ll come right out and say it: I’m not a big fan of either variant races: The Half-dwarf feels to me like the dwarven equivalent of the half-elf and I like my fantasy races distinct – dwarves should in my mind not be able to produce offspring with other races, it detracts from their social isolationism and their distinct culture. That’s a personal preference, though and will not fracture into my final verdict.

Now, the stone dwarves are interesting in that they are EXTREMELY good at being tanks – stone dwarf armiger is probably a terrible nightmare for any DM. The massively powerful race is balanced with some crippling weaknesses, though said weaknesses may impede the character massively in day-to-day adventuring. If your campaign is like mine and more on the low-level end of magic, then this race might be unbalancing or very problematic for the player, much like centaur PCs and similar weird races. DMs should definitely beware and think about their modules when including a stone dwarf so that unpleasant frustrations and opportunities to shine are balanced – more so than with any other race I’ve read in the last couple of months.

Now, the feats, I’m loathe to say it, smell of LAZY design. Come on. There are so many “+2 to skill(-group) x, +4 if condition y is met”-feats herein, it’s sad. And no one wants or needs those. The minor-skill-bonus-feats were boring and lazy design in 3.X and they still are today. There are 2 okay feats herein (the Dwarven Fury and Eagle-calling), but overall, they are weak and bland.

It is here, I was thinking that the pdf didn’t have anything to offer for my campaign and this is when I started to read the flaws – they rock. (Pardon the pun!) If you’re playing with the option for flaws, these iconic options should put a smile on your face. The mundane new items herein are also really cool and flavourful. However, how to rate this? Honestly, for me personally, this pdf didn’t have too much to offer, mostly due to neither variant race working for me – they might work for you, though, and thus I won’t hold that versus the pdf. What I do hold against it, though, is the bland, boring, bad selection of feats – the book on Halflings showed that this can be done better. The Flaws and mundane items somewhat offset this weakness, though I would have liked to see more of both and if you don’t use flaws, these might be of less use to you – though reskinning them as curses should be easy.

To cut a long ramble short – personally, I didn’t like this book, but as a reviewer, I can see appeal for certain demographics and realize that some of my glitches are based on my personal preferences. Thus, I’ll settle for a final verdict of 3.5 stars, but still round down to 3 stars for the purpose of this platform.

Player’s Options: Dwarves is available from: