After School Adventures: Adventures in Wonderland #3 – The Dodo’s Race (5e)

After School Adventures: Adventures in Wonderland #3 – The Dodo’s Race (5e) 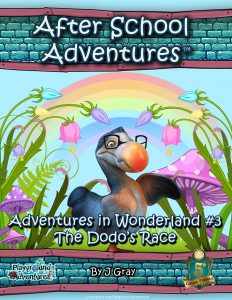 The 5e-version of the third installment of the kid-friendly adventure-sequence intended to be played in a single session after school clocks in at 9 pages, 1 page front cover, 1 page editorial/SRD, 1 page advertisement, leaving us with 6 pages of content, so let’s take a look!

After #2, the players should have reached 2nd level.

The first potential combat obstacle would be a red gelatin cube – if defeated and eaten, the PCs can thereafter swim through the lava pit via Strength (Athletics) that represents the first challenge. Otherwise, it’s Dexterity (Acrobatics) to get past it. This is pretty much the leitmotif here – the next obstacles, a loop de loop, requires climbing (in 5e, unfortunately, once again Strength (Athletics), where PFRPG had two different skills here), and defeating an optional black cube may net the PCs a similar angle here. The final obstacle also features an optional blue cube, which may be eaten to gain electricity resistance, for the final obstacle is a jelly fish tank, where some are electrifying, while others aren’t. The truth can be analyzed via detect magic and Intelligence (Arcana) or Wisdom (Perception).

J Gray’s Dodo Race is a bit of a misnomer – it is less a race, more of an obstacle course, considering that there are no contestants but the PCs. If you actually make jello-cubes and hand them out when the PCs defeat them, it’ll certainly generate some fond memories. From a design perspective, this one feels a bit trivial, even considering the target demographic – during my test-run, the PCs pretty much aced the module without needing to partake in the combats at all. Sure, this is intended as an alternate solution…but still. I don’t know, it’s perhaps due to the title that I expected some competitive aspect. And indeed, the set-up would carry a full-sized adventure: More obstacles, competing teams, the like – the idea’s great! While I hence entered this module with the wrong mindset and ended up being slightly disappointed, the players enjoyed it, though less so than #2.

If you have the luxury of choosing whether to play the PFRPG or D&D 5e-version, I consider the PFRPG version to be slightly better this time around, mainly due to the skills employed being a bit more diverse.

Since it would not be fair to penalize the little book for my expectations, my final verdict will hence clock in at 5 stars.

You can get this little module here on OBS!