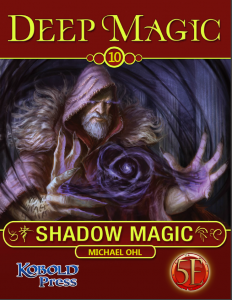 Without much further ado, we kick off this file with a new sorcerous origin, the shadow bloodline. At 1st level, you gain darkvision 60 ft. (what if you already have it?) and may see through magical darkness in the range. Also at 1st level, you can gaze at a target within 60 ft. to impose disadvantage on an attack roll or a sight-reliant ability-check. This usable Charisma modifier times (minimum 1) before requiring a long rest to recharge. 6th level yields advantage on saves versus illusions and allows you to expend two sorcery points to cast blur or mirror image. 14th level allows you to step into shadows for 200 ft.-range teleportation as a bonus action, with the option to stay up to Charisma modifier rounds (minimum 1) in this interim, making you invisible and invincible and incapable of affecting anything. This costs 4 sorcery points per use. Not a big fan of the “can’t be affected”-part, personally – I think that could have been solved in a more organic manner by using etherealness et al. as orientation. 18th level yields a 15-ft.-aura, which can be activated for 4 sorcery points, potentially dealing necrotic damage and frightening enemies, with a save to negate the frightened condition.

We also get a new warlock patron, the light-eater, whose spells include ray of sickness, fear, shadow monsters, etc. – it makes ample use of the new spells. 1st level allows the warlock to spend an action to force those within 10 ft. of you to make a Wisdom save to avoid being blinded until the end of your next turn, with a short or long rest to recharge. 6th level yields the living shadow feature: When taking damage, you may, as a reaction, teleport the creature that damaged you up to 60 ft. away. The creature also takes cold damage and becomes frightened on a failed Wisdom save. This is very potent, but needs a short or long rest to recharge. 10th level nets immunity to fear-based effects (which are not a concisely-defined thing in 5e) AND the frightened condition (which is, thankfully, very concisely defined!) – whenever you are affected by one such effect, you can use your reaction to return it back to sender, frightening the creature potentially, with subsequent saves to end the effect. Okay, so how does this work with the warlock entering the area of a pre-existing AoE-effect that causes the frightened condition? Can this be reflected as well, or does the warlock need to be the target? The wording could use some clarification here.

At 14th level, you can conjure forth a shadow horror, which uses chuul stats with some modifications – a very potent ally that does require concentration to maintain, though. ODD: The pact boons here refer to the “dark one” instead of to “light-eater” – some version-change-remnant, no doubt. The boons yield Hide for familiars in shadows, but also disadvantage for it in bright light; a blade that may cause necrotic damage or a weightless book of shadows. Okay…so can other creatures interact with the book? What are its stats? These three modifications of the pacts are problematic – you see, they do not provide a full rules-text, but seem like they are supposed to modify existing pact boons…but they don’t clearly spell out their reference, which means that RAW, the pact of the blade does not yield proficiency with the blade, for example.

We get a third class option, the whisper rogue archetype nets darkvision 60 ft at 3rd level, no upgrade when you already have it, as well as the minor illusion and douse light cantrips. Okay, as what spells do these count? Do they have a spellcasting attribute? Srsly, the arcane trickster literally provides an easy precedent template here. And yes, I am cognizant of the spells not necessarily requiring that for most instances, but the lack of definition can still generate issues. AT 3rd level, you may Hide while observed, providing you have dim light or darkness, with advantage on Dexterity (Stealth). This requires a short or long rest to use again. 7th and 15th level yield +1 use per rest-interval. 9th level provides the shadow road feature for 60 ft. shadow-step-short-range teleports as an action, with a short or long rest to recharge. And yes, you may Hide as part of that teleport. 13th level allows you to become invisible for up to 1 hour while in hazier conditions. It ends when you cast a spell or attack, but otherwise requires RAW no concentration, but does require a short or long rest to recharge. At 17th level, attacks against you have disadvantage, but if you are hit, the ability shuts down until the start of your next turn – interesting.

The pdf also contains a total of 20 spells – as always, we’ll move from top to bottom of the power-range, starting with the two cantrips here: Douse lights can counter the illuminating cnatrips or extinguish small light sources; claws of darkness grows two cold-damage claws with 10 ft.-reach and may use them with melee spell attacks. Okay, so one or two? I assume one, since it doesn’t state otherwise…but yeah. A total of 3 1st-level spells can be found, the first being black ribbons, which is a pretty underwhelming shorter range reskin of entangle, based on Dexterity instead of Strength. Cloak in shadow makes for a nice reaction spell when targeted by an attack, but before the roll is made. It imposes disadvantage and provides resistance to radiant damage until the start of your next turn. Nice (and gets the casting time reaction formatting right). Cloying darkness is a ranged spell attack that inflicts necrotic damage and dims the lights for the target by one step.

There are 4 2nd-level spells, starting with darkbolt, a cold-damage inflicting variant of scorching ray that prevents hit targets that fail a Constitution save from taking reactions for 1 round. Solid variant. Dark path conjures forth a path through difficult terrain or obstacles. Negative image lets you swamp places with a target within 120 ft. that you can see, with a save for unwilling targets. Shadow puppets is too strong for 2nd level: You animate a shadow within 60 ft., make a melee spell attack and cause psychic damage – on a failed save, the target is paralyzed until the start of your next turn. This would be as well a place as any to note that “At Higher Levels” sections are only bolded, not bolded and italicized throughout the pdf– while I consider this a harmless, cosmetic deviation, someone is bound to complain if I don’t mention it.

We get 2 new spells for spell-levels 3rd, 4th, 5th and 6th – in sequence, from 3rd onwards, those would be call shadow mastiff (guess what it does) and legion, a cube of shadowy soldiers that attacks those that enter it for the first time or starts its turn within or within 5 ft. of it for necrotic damage, using melee spell modifier. 4th level’s shadow monsters affects 2 creatures in range, which, on a failed save, perceive allies as monsters and forces them to attack said “monsters” – compared to dominate person’s limitations or better, confusion, this seems like a straight power upgrade that could use nerfing.

Night terrors is ridiculous: It’s an AoE-spell that paralyzes creatures with fright; sure, beings immune to the frightened condition can’t be affected, and the spell has saves on subsequent rounds, but it’s still AoE save-or-suck. Shadow Realm Gateway is a 5th-level ritual with an obvious effect; dark dementing causes a creature to need to save; on a success, it gains a short-term madness effect, on a failure a long-term madness…which is really, really potent. That means, even on a successful save, there’s a very good chance you’re done for – one look at the short-term madness table will make you cringe. Dragon slayer of a spell. OP. Needs to die.

At 6th level, we have banshee wail, which is better than harm: It kills off half current hit points and causes the frightened condition, affecting all critters in a 30 ft.-cone and causing psychic damage on a successful save. Needs a nerf. Fixed damage, no halving. WTF. Become nightwing nets you flight and a recharging necrotic damage breath attack, which is a nice one, all concerned. The final 3 spell levels all come with one spell each: 7th-level’s conjure shadow titan is pretty self-evident, using a variant stone giant as basis; Malevolent waves nets all allies in range advantage on Dexterity (Stealth) and all enemies are poisoned, sans save. Finally, umbral storm generates a necrotic damage-causing area that also causes exhaustion on failed saves – it may be moved around, just fyi.

Editing and formatting are very good on a formal level and also rather well done on a rules-language level. Layout adheres to Kobold Press’ nice two-column full-color standard and the pdf sports seriously nice full-color artworks, though fans of Kobold Press will remember some of the pieces. Bookmarks are included in the pdf.

This is the first pdf by Michael Ohl I’ve read and I must admit to be being positively surprised: As a whole, the pdf does provide some thematically-fitting, interesting options. For the most part, the rules-language is precise and well-crafted and while there are some hiccups, they don’t wreck the pdf per se; balance-wise, the save-or-suck conditions imparted in the spells make for some serious balance-concerns on my part, though – and as a whole, I consider this a mixed bag with some high points and some low points – thus, my final verdict will clock in at 3.5 stars…and in spite of the freshman bonus, I don’t feel that I can round up for this one.

You can get these shadow spells here on OBS!

You can directly support Kobold Press making the Warlock zine here on patreon!