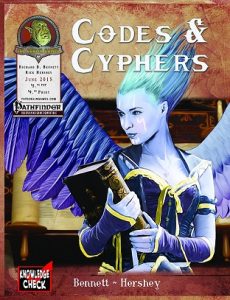 After a brief section of introductory prose, we delve right into the subject matter: The age-old problem of how to convey a message to a target without any other being realizing it or being capable of understanding it. In order to understand the content herein, we first need to define a couple of basic cryptology terms; the book differentiates between the following: A code is a system that uses letters and symbols as stand-ins for other concepts- thus, for example, “Ash” may be a stand-in for lord. Real life medieval arcane texts tend to be written in such analogues, often drawing upon mythology, most famously likening e.g. Jesus Christ with the unicorn or pelican.

Cyphers would be more delicate, using symbols, numbers or other letters as stand-ins for certain numbers or symbols – e.g. the word “Reviewer”, when run through a cypher I used in my games, looks like this: “Zalxacaz”. The original, unchanged text is defined as “plain text,” the process used is known as “encryption” and getting to the real message is known as “decryption.” Cryptography is the study of making such codes; cryptanalysis is the study of how to break encrypted texts and cryptology is the hyperonym, encompassing both disciplines.

We begin this supplement with a brief history of the nature of cryptology in real life; from Mesopotamia to ancient Egypt, we get a brief history of codes and cyphers within our history, spiced up with some adventure hooks and already pointing towards potential problems. Interesting, btw. – any form of literacy, to a certain extent, from the FuÞark to Latin or more arcane scripts, language and the written word have, for a long time, been used to convey meaning only to the initiated. Two sample, lesser known such scripts are highlighted as exemplary ones – Ogham and Enochian, which are pretty nice…and you can find fonts with a brief internet search, should you care to write texts in them.

Beyond that, we are introduced to the difference between encoding the message to be encrypted (steganography) and the means to encrypt the meaning of it, which is generally known as encryption. Beyond the historical means, the obvious means of concealing messages via shrink item is mentioned. Short texts can be easily concealed with transposition, with letters arranged to be read as a spiral as a sample. Depending on the size of the text, you can make pretty awesome hand-outs via this one – I used this once as a means of making a vortex-like message, concealed in the insane scribbling of an asylum inmate. The Spartan scrytale is mentioned as a similarly simple means of employing this type of concealing messages. The most common means of generating a hidden code employed by roleplaying games would be the substitution, where letters are listed and either inversed regarding their position in the alphabet (with c corresponding to x, for example) or similar changes. While frequency analysis can crack such codes, it nonetheless should provide an easy means for PCs to potentially decipher. The Vigenere Cypher would be even more famous and thus, the book also covers this one – and correctly identifies Ultimate Equipment’s cypher book’s source, misnamed though it may be, as an item that probably was supposed to confer to the variation of the substitution cypher known as Bablington Plot. The, at this point, pretty well-known One Time Code, a pretty much randomly determined number-based code. From the alchemical alphabet to the witch’s alphabet (again -one google away from getting the fonts), we get two more, unique secret writing styles.

The second chapter sports secret rules and basically goes through a few of the more common classes (excluding those introduced in the ACG and OA), to then provide a new archetype, Courier Rogue, who is particularly adept at Bluffing and Sleight of Hand pertaining secret messages. Courier’s Pockets, at 10th level, allows for a container to conceal messages as though it were magical, which is a nice modification. Linguistics as a skill receives a minor expansion in its uses to pertain to encryption/decryption. The pdf also sports a collection of 3 different feats, the first renders formulae less expensive for alchemists due to using the script, while Cypher Magic increases the CL of casting from scrolls. Cypher Script is similarly less expensive and makes spell transcription quicker.

Absolutely awesome: The book sports two new teams for the rules presented in Ultimate Campaign, the cryptologists and the espionage cell, including events that range from double agents to coups and shadow wars -awesome! Both aforementioned scytale and a cypher book for one-time codes can be found among the mundane items and we get three simple codes as samples – keyword substitution codes, keyword substitution and the classic straddling draughtsboard are used as samples to what you can do with properly used cryptography.

The third chapter of the book sports two new magic items and two new spells – with a monocle that allows you to read languages and lenses that scramble texts by passing them through protean souls (!!!), we get some pretty cool, high-concept items herein. The spells arcane cypher and discern encryption are somewhat less flashy by necessity, but they are well-placed regarding their level-range and provide neat options regarding their placement within the spells available. The pdf then concludes with a smattering of sample NPCs – the prismatic chamber, a small organization of code-breakers containing a total of 4 fully stated NPCs, running the gamut from investigators and rogues to a disguised axiomite. The characters generally are nice, though, in a somewhat annoying formatting peculiarity, the statblocks, while using italicization perfectly, don’t seem to spot the bolding for some words that usually are standard and help read the statblocks – minor formatting glitches, sure – but glitches nonetheless.

Editing is top-notch and marks this as a product of the newer direction of Fat Goblin Games, of the age where the company began excelling and publishing with care. Formatting does sport some hiccups on a cosmetic level, but none that really would break the game for you. Layout adheres to a drop-dead gorgeous two-column full-color standard with a mixture of thematically fitting full-color stock art and public domain pieces. The pdf comes fully bookmarked for your convenience.

Richard D. Bennett’s knowledge check regarding Cyphers and Codes can be deemed an success – the book provides an easy to grasp, concise introduction to codes and cyphers for the uninitiated; if I had had this book 20 years ago, it would have blown me away and greatly enhanced my game. For GMs who already are using codes and cyphers in their game, chances are they’ll find some new material herein…unless they have already spent time researching the subject matter on their own.

My personal highlights herein would be actually the additions to the Ultimate Campaign-systems provided in this book, with the rest of the crunch ranging from awesome (items + spells) to okay (archetypes + feats). Personally, I think it would have been quite a coup to get the fonts of the languages cited herein included in the deal, but I get why that wasn’t done. What I don’t get, though, is the obvious lack of alchemical writing and material based cryptology. Using e.g. silk worms to eat the true letters in a given missive, written with invisible, but edible ink? What about a chemistry-based alchemical subsystem for making diverse arrays of invisible ink or the like? I’m aware that this belongs to the field of steganography, but I still felt that this book could have used a section providing more details here.

In short: For novices, this is a great introduction to the subject matter; it’s well-researched and concisely presented. Pros, though, may derive slightly less use from this pdf. Hence, my final verdict will clock in at 4.5 stars, rounded down for the purpose of this platform.

You can get this neat introduction to encryption-methods here on OBS!
Endzeitgeist out.