Fear Itself: The Seventh Circle (GUMSHOE)

Fear Itself: The Seventh Circle (GUMSHOE) 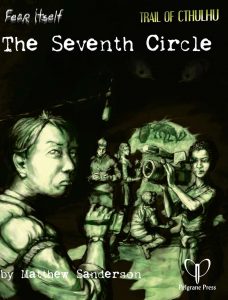 This adventure for Fear Itself clocks in at 78 pages of content if you take away the covers, editorial, etc., so let’s take a look!

First of all: This was penned for the first incarnation of the game, which means that you may need do some slight conversion work when adjusting this to the second iteration of the game. Secondly, it should be noted that the “Trail of Cthulhu”-header denoting an alternate system is not simply cosmetic or an indicator of a single page of information; the module does present quite a bit of advice on how to use it in conjunction with that game, should you prefer that cosmology to the criminally-underrated Ocean Game-setting.

My review is based on the print version, a softcover with glossy, nice pages. I do not own the electronic version of the book.

The book comes with 6 different pregens, and essentially can be summed up as two different scenarios: The imho more rewarding one is clearly intended for a regular playing experience – it hinges on the PCs being smart and doing their legwork from the get-go, and makes the whole scenario significantly most investigative in focus. The second way of playing this, is to basically throw the PCs pretty quickly into the main location of the module – in such a context, the whole story may end up being somewhat obtuse in its details, but the module can then be easily resolved within the frame of e.g. a convention. It should be noted that this adventure does a much better job at this convention-game-angle than many comparable modules released for Esoterrorists or Fear Itself.

So, this is the story of a man named Patrick Raleigh, and how he met the lawyer Valerie Irvine and thus was introduced into the per se not malignant Hermetic Order of the Seventh Circle. While, of course, not necessarily benevolent in the context of the world of Ocean Game, these occultists nonetheless are not per se esoterrorists – and when Raleigh found out about the island Eilean Mòr (situated in the Flannan Isles) and how mysterious disappearances happened there, he began investigating.

Wary of Valerie Irvine, he indeed confirmed that the remote island does seem to have something going on – and decided that he’d need to place a ward there to harness the power. This is where the famed architect Nathan Glaas entered the frame, who himself was in the midst of a nasty divorce with his soon-to-be ex-wife Audrey. Nathan was tasked to create a house based on the principles of sacred geometry, Indeed, much to my joy, the book comes with rather extensive cartography, an explanation of sacred geometry patterns, and provides player-friendly versions of the maps as well – this is, particularly for GUMSHOE-titles that often skimp on the cartography, a huge plus!

Anyhow, Nathan Glaas complied to the demands of Raleigh for secrecy – also to keep the profits from the construction off the books, after all, he was involved in a messy divorce. Soon after the building’s completion, Raleigh and the now properly in the order initiated Nathan traveled to the island, unearthing an ancient cave that showed signs of human sacrifice – and something truly dire – basically a tear in the membrane. Sealed for now, but yeah – the occultists pushed the circular altar to the side, and inadvertently opened let the genie out of the bottle – something emerged from the Outer Dark! Retreating into the house, the surviving members realized that they had a containment breach of the worst kind, but thankfully, the sacred geometry of the house left them with one final, desperate gambit – a ritual that would see the occultists all die but Raleigh, and see Nathan entombed in the center of the house, as a kind of supernatural ghost-guardsman.

Thus, Raleigh vanished, taking the alias of Adam de Brate (funny) – but he did not account for Valerie Irvine’s ambition or Audrey Glaas’ persistence. With her husband vanishing, divorce was stalled, and so the two women forged an alliance that saw Irvine masterminding the entry vector of the PCs. The pregens are members of the television-crew of a Ghost Adventures-like reality TV – perfect dupes to unleash the entity – and for Irvine, to harness the power.

Thus, the module has two vectors – if the PCs do their legwork, they will happen upon Raleigh and enter the island forewarned, while otherwise, just throwing the PCs inside can make the rather labyrinthine background a bit puzzling. My personal suggestion? Play this with OV-agents that research Raleigh, find him and before he explains what he knows about the horrid things that came to pass, cut to black. THEN use the pregens, play the second route of the scenario, and once things inevitable go down the drain, have the OV-agents show up. This way, you can play both scenario-progressions at once!

The island and its dilapidated lighthouse manage to evoke a sense of forlorn potency, and as the PCs experience the haunting of the ghost-turned Nathan Glaas, they will sooner or later find the prehistoric ritual chamber and their puzzling array of corpses – the PCs even get the chance to rappel down into basically the Outer Dark (hint: BAD IDEA!), and Valerie Irvine as a mundane villain and wildcard, makes for a nice tool for the GM to use if the PC’s finale is going too smoothly.

You see, once Nathan’s been taken care off (from the PC’s perspective, he is, after all, responsible for the haunting!) and laid to rest, the true horror emerges. Or rather, doesn’t. Why? Well, of all critters. Of all ideas. Of all the cool entities that the world of Ocean game offers….of all of them, the module opts for living darkness. Yep, ladies and gentlemen, whip out all of your Lost and Alan Wake jokes right now, the big monster is about as lame as can be. And yep, it can, big surprise, be driven back by light. You’ll likely need the appearance of Valerie to sabotage the PCs, and in the convention version, this can come rather far out of left field. This monster is the central failure of the module – it is not even remotely scary. It’s boring, cliché, and I strongly suggest that you replace it with something more interesting.

They can also use her to beat the adventure – for sealing the rift once more, you guessed it, requires a sacrifice – either one of the players, or some NPC – and the latter aren’t exactly available aplenty on the remote isle.

Editing and formatting are very good on a formal and rules-language level. Layout adheres to the two-column b/w-standard with really neat b/w-artworks provided. The cartography and handouts are similarly b/w and truly appreciated in their player-friendly focus. The softcover is neat, and I can’t comment on the electronic version.

Matthew Sanderson’s “The Seventh Circle” is a per se great and versatile adventure; the investigative angle works slightly better than the one where you drop the PCs directly on the island, but the option to employ both in conjunction with one another as I suggested above adds some further replay-value and options. While the background story can feel a bit overcomplicated for the convention-game-style progression, it can be really helpful when the players are veterans, making the truth at least somewhat challenging to unearth. Indeed, I’d consider this a 5-star adventure, were it not for one thing: As awesome as the story, the atmosphere, the build-up, is, the payoff is hard to stomach – it is one of the worst disappointments I’ve seen in a horror module in quite a while, and it kinda sinks the module as written for me. Sure, a replacement is easy enough to pulls off, and sure, the Trail of Cthulhu option is actually better this time around, but ultimately, this drags the module down from a definite recommendation to a module that is certainly good, but not as good as it could have easily been. My final verdict will thus clock in at 4 stars.

Enjoying my reviews? Please consider donating to my patreon. It’s keeping the lights on.