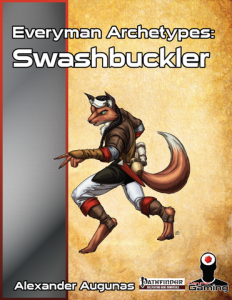 The first Everyman Archetypes-pdf clocks in at 10 pages, 1 page front cover, 1 page editorial, 1 page SRD, leaving us with 7 pages of content, so let’s take a look!

So, after a page that explains the basic design-tenets of the options herein, we are introduced to the daredevil. The signature deeds of this archetype allow it to use acrobatics and panache reactively to roll a skill-check versus an attack-roll to negate a particular assault. The expenditure of a finite resource saves this particular ability from the by-now old “EZG rants on skills versus atk”-tirade – while I remain not a big fan of it, I’ll shut my trap for now. 3rd level sees a significant passive Acrobatics-bonus, increasing the mobility of the class. At 7th level, a kind of improved Spring Attack that also works with Vital Strike deserves special mention – why? Because the agile, devastating blow pretty much can be considered to be something the swashbuckler ought to have been able to do in the first place. Speaking of which – 5th level (and 9th) net the daredevil free Vital Strike with light and one-handed piercing weapons as well as a minor damage/atk-bonus, further emphasizing the concept provided by the aforementioned deeds. The capstone is an auto-crit-confirmer with better threat-range and multiplier, which, as you can probably glean, makes level 20 swashbucklers damage-monsters.

The dashing commander is essentially a cha-based specialist of Battle Cry, becoming immune to fear while under battle cry, with options to enhance ally-rerolls and morale benefits. The capstone also enhances the rerolls gained. Overall solid, if not that interesting. Oppugnant Duelists can use panache to gain surge-like 1d6-benefits to social skills – here, the interesting concept would be the exploding die: On a 6, the duelist may roll again and add the results together. Yes, I love this. Why? Because I will never forget the one time my elven Infiltrator managed to best an undead dragon in Shadowrun by making a check versus 37. The face of my then DM was priceless as the 6s came coming. Exploding dice rock. Even better, the archetype provides full synergy with the stellar Psychological Combat-pdf – while you do not require it, I do suggest you get this inexpensive gem. Another cool archetype, mainly because it plays like fun and can duplicate in game the unlikely deeds one associates with swashbuckling.

The Rapscallion gets 6+Int skill ranks per level and a modified proficiency list. Beyond these, they regain 1 panache whenever they roll a natural 6 on a sneak attack damage dice – sneak attack is gained at 3rd level and increases by +1d6 at 6th level and every 3 levels thereafter. So yeah, this is the rogue-y swashbuckler and it makes sense, with rogue talents being added to the array of bonus feats available. The archetype also is particularly adept at using dirty tricks and feints. The class pays for this by losing precise strike, menacing swordplay and superior feint. I do like this one, but I am not sold on the sneak attack damage dice related panache-regain – it asks to be gamed and a cap per round, scaling upwards, would have somewhat mitigated the temptation of experimenting with number of attack-increasing trickery. That being said, on its own for more linear builds, the math checks out.

The Two-Weapon duelist gains a form of rend with two weapons and may utilize panache and AoOs as resources to render two-weapon combat more efficient -all in all solid, though I wished the pdf sported a means for the two-weapon specialist to be more agile – after all, that’s the main drawback of two-weapon fighting in the first place and the one concept that does not line up well with the base class. Vainglory swashbucklers may gain personal deeds – they essentially can treat feats they do not own as deeds, with an ample list provided.

There also are new feats herein, though not all of them made me cackle with glee: Take Charmed Panache: While you have 1 panache, charmed life allows you to add cha-mod to all saves, with a failure ending it – this essentially triples the effect of the base ability and makes it passive. Nope, not gonna happen in my group. Feint targets of charges, on the other hand, is pretty much what I expected the base class to handle, so yeah, nice. There obviously is a Dex-to-damage feat and a means to negate AC-penalties imposed by feats you use via Bluff would be another one that may be okay, but also not earthshattering. A feat that allows for swashbuckling via natural attacks, on the other hand, pretty much is a huge enabler for a vast array of builds, so kudos there, though the built-in Dex-mod replacement makes the feat a bit stronger than the base take. Panache regain via natural 20s of combat maneuvers or skills is interesting. The pdf also sports a feat that allows you to swashbuckle with shields, emphasizing the blocker-aspect of the class and two-weapon precise strike synergy is nice as well.

Editing and formatting are very good, I noticed no significant glitches. Layout adheres to Everyman Gaming’s two-column full-color standard and sports actual unique full-color artworks – nice to see in such a small pdf. The pdf comes fully bookmarked for your convenience.

Alexander Augunas is right now one of my favorite crunch-designers and there is a reason for that – not one of the archetypes herein is boring, all of them radically change the way in which the base-class of the swashbuckler plays, and imho, in most cases, for the better. More than that, the archetypes do interesting things with their mechanics, things I have not seen other archetypes do – and this is worth quite a bit to me. Among a flood of boring +/–exchanges, these stand out. What this pdf manages to achieve is impressive in that it takes a base class frame-work that did not impress me and refined it to the point, where the archetypes herein imho are closer to what the class was trying to do in the first place.

At the same time, however, I am not 100% sold on some design-decisions herein -now don’t get me wrong, they are NOT bad; they tend to be mostly mathematically sound and some sample builds in action proved that they are functional. Not all are perfect, though and ultimately, I wished some of them went one step beyond, further utilizing the awesome base mechanics Alex has devised to a fuller extent. That being said, I do consider the archetypes herein to be a vast blessing for the swashbuckler class and ultimately, a must-have addition to the class’s roster. Still, in the end, I can’t bring myself to absolutely unanimously recommend it – perhaps I’ve been spoiled by Alex’ designs, but I found myself wishing that some of the archetypes herein went one step further to set them apart versus the base class, that they did slightly more with their utterly awesome unique rules-components. This, combined with the minor concerns mentioned above, makes me settle on a final verdict of 4 stars, with the caveat that fans of the swashbuckler class who want it to actually work better in its chosen field should definitely get this inexpensive pdf.

You can get this upgrade for your swashbucklers here on OBS and here on d20pfsrd.com’s shop!